Encyclopedia
Indian Ocean trade has gained an important role in history, and has been a key factor in East-West exchanges.

The Satavahana
Satavahana
The Sātavāhana Empire or Andhra Empire, was a royal Indian dynasty based from Dharanikota and Amaravati in Andhra Pradesh as well as Junnar and Prathisthan in Maharashtra. The territory of the empire covered much of India from 230 BCE onward...
s developed shipping ventures in Southeast Asia.

The 8th century wooden double outrigger
Outrigger
An outrigger is a part of a boat's rigging which is rigid and extends beyond the side or gunwale of a boat.In an outrigger canoe and in sailboats such as the proa, an outrigger is a thin, long, solid, hull used to stabilise an inherently unstable main hull. The outrigger is positioned rigidly and...
sailed Borobudur ship
Borobudur ship
A Borobudur ship is the 8th century wooden double outrigger sailed vessel of Maritime Southeast Asia depicted in some of bas reliefs of Borobudur buddhist monument in Central Java, Indonesia...
of ancient Java
Java
Java is an island of Indonesia. With a population of 135 million , it is the world's most populous island, and one of the most densely populated regions in the world. It is home to 60% of Indonesia's population. The Indonesian capital city, Jakarta, is in west Java...
suggested that there is ancient trading links across Indian Ocean between Indonesia
Indonesia
Indonesia , officially the Republic of Indonesia , is a country in Southeast Asia and Oceania. Indonesia is an archipelago comprising approximately 13,000 islands. It has 33 provinces with over 238 million people, and is the world's fourth most populous country. Indonesia is a republic, with an...
and Africa (in particular East Africa and Madagascar) called the Cinnamon route. The single or double outrigger is a typical feature of vessels of the sea faring Austronesians and the most likely vessel used for their voyages and exploration across Southeast Asia, Oceania, and Indian Ocean.

During the Muslim period, the Gujaratis were bringing spices from the Moluccas as well as silk
Silk
Silk is a natural protein fiber, some forms of which can be woven into textiles. The best-known type of silk is obtained from the cocoons of the larvae of the mulberry silkworm Bombyx mori reared in captivity...
from China
China
Chinese civilization may refer to:* China for more general discussion of the country.* Chinese culture* Greater China, the transnational community of ethnic Chinese.* History of China* Sinosphere, the area historically affected by Chinese culture...
, in exchange for manufactured items such as textiles, and then selling them to the Egyptians and Arabs.

In the south, Calicut was also the center of Indian pepper
Black pepper
Black pepper is a flowering vine in the family Piperaceae, cultivated for its fruit, which is usually dried and used as a spice and seasoning. The fruit, known as a peppercorn when dried, is approximately in diameter, dark red when fully mature, and, like all drupes, contains a single seed...
exports to the Red Sea
Red Sea
The Red Sea is a seawater inlet of the Indian Ocean, lying between Africa and Asia. The connection to the ocean is in the south through the Bab el Mandeb strait and the Gulf of Aden. In the north, there is the Sinai Peninsula, the Gulf of Aqaba, and the Gulf of Suez...
and Europe
Europe
Europe is, by convention, one of the world's seven continents. Comprising the westernmost peninsula of Eurasia, Europe is generally 'divided' from Asia to its east by the watershed divides of the Ural and Caucasus Mountains, the Ural River, the Caspian and Black Seas, and the waterways connecting...
. In Calicut, Egyptian and Arab traders were particularly active. 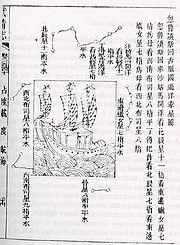 Chinese fleets under Zheng He
Zheng He
Zheng He , also known as Ma Sanbao and Hajji Mahmud Shamsuddin was a Hui-Chinese mariner, explorer, diplomat and fleet admiral, who commanded voyages to Southeast Asia, South Asia, the Middle East, and East Africa, collectively referred to as the Voyages of Zheng He or Voyages of Cheng Ho from...
criscrossed the Indian Ocean during the early part of the 15th century. The missions were diplomatic rather than commercial, but many exchanges of gift and produces were made.

The Portuguese under Vasco da Gama
Vasco da Gama
Vasco da Gama, 1st Count of Vidigueira was a Portuguese explorer, one of the most successful in the Age of Discovery and the commander of the first ships to sail directly from Europe to India...
discovered a naval route to the Indian Ocean through the southern tip of Africa
Africa
Africa is the world's second largest and second most populous continent, after Asia. At about 30.2 million km² including adjacent islands, it covers 6% of the Earth's total surface area and 20.4% of the total land area...
in 1497-98. Initially, the Portuguese were mainly active in Calicut, but the northern region of Gujarat was even more important for trade, and an essential intermediary in east-west trade.

Venetian interests were directly threatened as the traditional trade patterns were eliminated and the Portuguese became able to undersell the Venetians in the spice trade in Europe. Venice broke diplomatic relations with Portugal and started to look at ways to counter its intervention in the Indian Ocean, sending an ambassador to the Egyptian court. Venice negotiated for Egyptian tariffs to be lowered to facilitate competition with the Portuguese, and suggested that "rapid and secret remedies" be taken against the Portuguese. The Mamluks sent a fleet in 1507 under Amir Hussain, which would fight in the Battle of Chaul.

During the 16th century the Portuguese
Portugal
Portugal , officially the Portuguese Republic is a country situated in southwestern Europe on the Iberian Peninsula. Portugal is the westernmost country of Europe, and is bordered by the Atlantic Ocean to the West and South and by Spain to the North and East. The Atlantic archipelagos of the...
had established bases in the Persian Gulf
Persian Gulf
The Persian Gulf, in Southwest Asia, is an extension of the Indian Ocean located between Iran and the Arabian Peninsula.The Persian Gulf was the focus of the 1980–1988 Iran-Iraq War, in which each side attacked the other's oil tankers...
. In 1602, the Iranian army under the command of Imam-Quli Khan
Imam-Quli Khan
Imam-Quli Khan was an Iranian military and political leader of Georgian origin who served as a governor of Fars, Lar and Bahrain for the shahs Abbas I and Safi.-Biography:...
Undiladze
Undiladze
The Undiladze were a Georgian noble family whose members rose in prominence in the service of Iran’s Safavid dynasty and dominated the Shah’s court at a certain period of the late 16th and early 17th centuries....
managed to expel the Portuguese from Bahrain
Bahrain
' , officially the Kingdom of Bahrain , is a small island state near the western shores of the Persian Gulf. It is ruled by the Al Khalifa royal family. The population in 2010 stood at 1,214,705, including 235,108 non-nationals. Formerly an emirate, Bahrain was declared a kingdom in 2002.Bahrain is...
. In 1622, with the help of four English ships, Abbas retook Hormuz
Hormuz Island
Hormuz Island , also spelled Hormoz, is an Iranian island in the Persian Gulf. It is located in the Strait of Hormuz and is part of the Hormozgān Province.-Geography:...
from the Portuguese in the Capture of Ormuz (1622)
Capture of Ormuz (1622)
In the 1622 Capture of Ormuz, a Anglo-Persian force combined to take over the Portuguese garrison at Hormuz Island, thus opening up Persian trade with England...
. He replaced it as a trading centre with a new port, Bandar Abbas
Bandar Abbas
Bandar-Abbas or Bandar-e ‘Abbās , also Romanized as Bandar ‘Abbās, Bandar ‘Abbāsī, and Bandar-e ‘Abbās; formerly known as Cambarão and Port Comorão to Portuguese traders, as Gombroon to English traders and as Gamrun or Gumrun to Dutch merchants) is a port city and capital of Hormozgān Province on...
, nearby on the mainland, but it never became as successful. 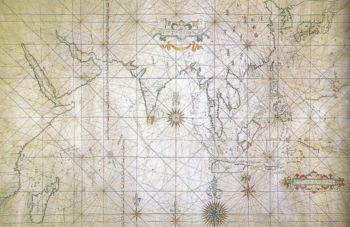 During the 16th and 17th century, Japanese ships also made forays into Indian Ocean trade through the Red Seal ship system.
The source of this article is wikipedia, the free encyclopedia.  The text of this article is licensed under the GFDL.