Bandar-Abbas or Bandar-e ‘Abbās (Persian: بندر عباس), also Romanized as Bandar ‘Abbās, Bandar ‘Abbāsī, and Bandar-e ‘Abbās; formerly known as Cambarão and Port Comorão to Portuguese traders, as Gombroon to English traders and as Gamrun or Gumrun to Dutch merchants) is a port city and capital of Hormozgān Province
Hormozgan Province
Hormozgan Province is one of the 31 provinces of Iran. It is in the south of the country, facing Oman. Its area is , and its provincial capital is Bandar Abbas...
on the southern coast of Iran
Iran
Iran , officially the Islamic Republic of Iran , is a country in Southern and Western Asia. The name "Iran" has been in use natively since the Sassanian era and came into use internationally in 1935, before which the country was known to the Western world as Persia...
, on the Persian Gulf
Persian Gulf
The Persian Gulf, in Southwest Asia, is an extension of the Indian Ocean located between Iran and the Arabian Peninsula.The Persian Gulf was the focus of the 1980–1988 Iran-Iraq War, in which each side attacked the other's oil tankers...
. The city occupies a strategic position on the narrow Straits of Hormuz, and it is the location of the main base of the Iranian Navy. Bandar Abbas is the capital and also largest city of the province Hormozgān. At the 2006 census, its population was 367,508, in 89,404 families.

Bandar Abbas has always been a port, and as such its various names have all addressed this function. The most common name over time (Gameroon) has traditionally been said to derive from Persian
Persian language
Persian is an Iranian language within the Indo-Iranian branch of the Indo-European languages. It is primarily spoken in Iran, Afghanistan, Tajikistan and countries which historically came under Persian influence...
gümrük, customhouse (from Late Greek kommerkion, from Latin commercium, "commerce
Commerce
While business refers to the value-creating activities of an organization for profit, commerce means the whole system of an economy that constitutes an environment for business. The system includes legal, economic, political, social, cultural, and technological systems that are in operation in any...
"), but is now speculated to be from Persian kamrūn, shrimp (which in Portuguese is camarão, similar to the former Portuguese name).

The earliest record of Bandar Abbas is during the reign of Darius the Great (between 586 and 522 B.C.). Darius's commander, Silacus, embarked from Bandar Abbas to India
India
India , officially the Republic of India , is a country in South Asia. It is the seventh-largest country by geographical area, the second-most populous country with over 1.2 billion people, and the most populous democracy in the world...
and the Red Sea
Red Sea
The Red Sea is a seawater inlet of the Indian Ocean, lying between Africa and Asia. The connection to the ocean is in the south through the Bab el Mandeb strait and the Gulf of Aden. In the north, there is the Sinai Peninsula, the Gulf of Aqaba, and the Gulf of Suez...

During Alexander's conquest of the Persian Empire, Bandar Abbas was known under the name of Hormirzad.

In the year 630 CE, Maharaja Derbar Raja of Gemeron was defeated in battle and escaped to Ceylon, and he was later blown off course by a storm to the remote shores of Kuala Sungai Qilah, Kedah
Kedah
Kedah is a state of Malaysia, located in the northwestern part of Peninsular Malaysia. The state covers a total area of over 9,000 km², and it consists of the mainland and Langkawi. The mainland has a relatively flat terrain, which is used to grow rice...
(now Malaysia). The inhabitants of Kedah found him to be a valiant and intelligent person, and they made him the king of Kedah. In the year 634 CE, a new kingdom was formed in Kedah consisting of Persian royalty and native Malay of Hindu
Hindu
Hindu refers to an identity associated with the philosophical, religious and cultural systems that are indigenous to the Indian subcontinent. As used in the Constitution of India, the word "Hindu" is also attributed to all persons professing any Indian religion...
faith, the capital was Langkasuka
Langkasuka
Langkasuka was an ancient Hindu Malay kingdom located in the Malay Peninsula...
. (see Kedah Sultanate
Kedah Sultanate
The Sultanate of Kedah was the earliest sultanate on the Malay Peninsula and one of the oldest Sultanates in the world, founded in year 1136.-Kedah Kingdom:...
and Early history of Kedah
Early history of Kedah
Kedah is one of many early Malay Peninsula trade centres that have been found, many have yet to be identified. Its location at the entrance to the Straits of Malacca, on the same latitude as south India provided a natural sailing route between the two points, ships could sail due east or due west...
) 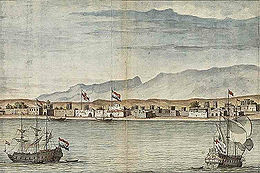 By the 16th century, Bandar Abbas was known as Gamrūn to the Persian
Persian people
The Persian people are part of the Iranian peoples who speak the modern Persian language and closely akin Iranian dialects and languages. The origin of the ethnic Iranian/Persian peoples are traced to the Ancient Iranian peoples, who were part of the ancient Indo-Iranians and themselves part of...
s. In 1565, a European navigator called it Bamdel Gombruc (that is, Bandar Gümrük, or "Customhouse Port"), citing this as the Persian and Turkish
Turkish language
Turkish is a language spoken as a native language by over 83 million people worldwide, making it the most commonly spoken of the Turkic languages. Its speakers are located predominantly in Turkey and Northern Cyprus with smaller groups in Iraq, Greece, Bulgaria, the Republic of Macedonia, Kosovo,...
name.Bandar Abbas was conquered by the Portuguese in 1514,and was an important to protect their commerce in the in the gulf and India. They named the city Comorão,due to the presence of lobsters and crabs on its shores.

In 1614, Comorão was taken by ‘Abbās the Great
Abbas I of Persia
Shāh ‘Abbās the Great was Shah of Iran, and generally considered the greatest ruler of the Safavid dynasty. He was the third son of Shah Mohammad....
from the Portuguese and renamed Bandar-e ‘Abbās, or "Port of ‘Abbās". Backed by the English navy, ‘Abbās developed Bandar-e ‘Abbās (known to the English-speaking world as Gombraun) into a major port.

By 1622, the Portuguese and English names had been officially combined to form Combrù or Combu, although the inhabitants still called it Bandar-e ‘Abbās. Sir Thomas Herbert said the official English name was Gumbrown, but pronounced "gŏmrōōn". He wrote in 1630 that "some (but I commend them not) write it Gamrou, others Gomrow, and othersome Cummeroon."

By the 1670s, the city was known as Gameroon

From 1740 onward, control of the town was sold to various Arab
Arab
Arab people, also known as Arabs , are a panethnicity primarily living in the Arab world, which is located in Western Asia and North Africa. They are identified as such on one or more of genealogical, linguistic, or cultural grounds, with tribal affiliations, and intra-tribal relationships playing...
rulers, and from c. 1780 it was controlled by Muscat
Muscat, Oman
Muscat is the capital of Oman. It is also the seat of government and largest city in the Governorate of Muscat. As of 2008, the population of the Muscat metropolitan area was 1,090,797. The metropolitan area spans approximately and includes six provinces called wilayats...
(now a governorate of Oman
Oman
Oman , officially called the Sultanate of Oman , is an Arab state in southwest Asia on the southeast coast of the Arabian Peninsula. It is bordered by the United Arab Emirates to the northwest, Saudi Arabia to the west, and Yemen to the southwest. The coast is formed by the Arabian Sea on the...
). In 1868, during Oman's decline, the town reverted to Persian rule.

In the 1980s, the name "Gameron" was changed in favor of "Bandar Abbas", following similar movements with Iranian names (see Iran naming convention).

Bandar Abbas serves as a major shipping point for mostly imports, and has a long history of trade with India
India
India , officially the Republic of India , is a country in South Asia. It is the seventh-largest country by geographical area, the second-most populous country with over 1.2 billion people, and the most populous democracy in the world...
, particularly the port of Surat
Surat
Surat , also known as Suryapur, is the commercial capital city of the Indian state of Gujarat. Surat is India's Eighth most populous city and Ninth-most populous urban agglomeration. It is also administrative capital of Surat district and one of the fastest growing cities in India. The city proper...
. Thousands of tourists visit the city and nearby islands including Qeshm
Qeshm
Qeshm Qeshm Qeshm (Persian: قشم - pronounced kē´shm is an Iranian island situated in the Strait of Hormuz, and separated from the mainland by the Clarence Strait/Khuran in the Persian Gulf .-Geography:...
and Hormuz
Hormuz Island
Hormuz Island , also spelled Hormoz, is an Iranian island in the Persian Gulf. It is located in the Strait of Hormuz and is part of the Hormozgān Province.-Geography:...
every year. 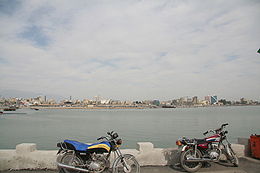 Bandar Abbas is situated on flat ground with an average altitude of 9 m (30 ft) above sea level. The nearest elevated areas are Mt. Geno, 17 km (11 mi) to the north, and Mt. Pooladi, 16 km (10 mi) to the northwest of the city. The closest river to Bandar Abbas is the River Shoor, which is rooted from Mt. Geno and pours into the Persian Gulf
Persian Gulf
The Persian Gulf, in Southwest Asia, is an extension of the Indian Ocean located between Iran and the Arabian Peninsula.The Persian Gulf was the focus of the 1980–1988 Iran-Iraq War, in which each side attacked the other's oil tankers...
, 10 km (6 mi) east of the city.

Bandar Abbas is accessible via the following highways:

Original Bandaris (residents of Bandar Abbas) speak Bandari (بندری), a dialect
Dialect
The term dialect is used in two distinct ways, even by linguists. One usage refers to a variety of a language that is a characteristic of a particular group of the language's speakers. The term is applied most often to regional speech patterns, but a dialect may also be defined by other factors,...
of Persian
Persian language
Persian is an Iranian language within the Indo-Iranian branch of the Indo-European languages. It is primarily spoken in Iran, Afghanistan, Tajikistan and countries which historically came under Persian influence...
. Bandari has loanword
Loanword
A loanword is a word borrowed from a donor language and incorporated into a recipient language. By contrast, a calque or loan translation is a related concept where the meaning or idiom is borrowed rather than the lexical item itself. The word loanword is itself a calque of the German Lehnwort,...
s from various European languages (e.g. tawāl, "towel
Towel
A towel is a piece of absorbent fabric or paper used for drying or wiping. It draws moisture through direct contact, often using a blotting or a rubbing motion. Common household textile towels are made from cotton, rayon, bamboo, nonwoven fibers or a few other materials.-Types of towels:* A bath...
") and Arabic (e.g. atā [اتا], "to come"). 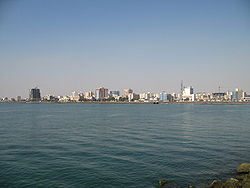