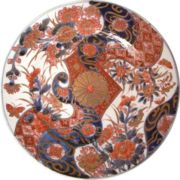 Imari porcelain is the name for Japanese porcelain
Porcelain
Porcelain is a ceramic material made by heating raw materials, generally including clay in the form of kaolin, in a kiln to temperatures between and...
wares made in the town of Arita
Arita, Saga
is a town located in Nishimatsuura District, Saga, Japan. It is known for producing Arita porcelain, one of the traditional handicrafts of Japan. It also holds the largest ceramic fair in Western Japan, the Arita Ceramic Fair...
, in the former Hizen Province
Hizen Province
was an old province of Japan in the area of Saga and Nagasaki prefectures. It was sometimes called , with Higo Province. Hizen bordered on the provinces of Chikuzen and Chikugo. The province was included in Saikaidō...
, northwestern Kyūshū
Kyushu
is the third largest island of Japan and most southwesterly of its four main islands. Its alternate ancient names include , , and . The historical regional name is referred to Kyushu and its surrounding islands....
. They were exported to Europe extensively from the port of Imari, Saga
Imari, Saga
is a city located in Saga Prefecture on the island of Kyūshū, Japan. Imari is most notable because of Imari porcelain, which is the European collectors' name for Japanese porcelain wares made in the town of Arita, Saga Prefecture. The porcelain was exported from the port of Imari specifically for...
between latter half of 17th century and former half of 18 th century, Japanese as well as the Europeans called them Imari. In Japanese, these porcelains are also known as Arita-yaki (有田焼). Imari or Arita porcelain has been produced continuously until present date.

Though there are many types of Imaris, Westerners conception of Imari in popular sense has association with only a type of Imari prodeced and exported in large quantity in mid-17th century. The type is called Kinrande. Kinrande Imari is colored porcelain with underglaze cobalt blue and overglaze red and gold. The color combination was not seen in China at that time. Traditional Ming dynasty color porcelain used dominantly red and green, probably due to scarcity of gold in China, whereas gold was abundant in Japan those days.
The subject matter of Imari is diverse ranging from of foliage and flowers, people scenery and abstraction. Some Imari design structures such as kraakstyle were adopted from China, but most designs were uniquely Japanese owing to the rich Japanese tradition of paintings and costume design. The porcelain has a gritty texture on the bases, where it is not covered by glaze. There is also blue and white Imari.
Kakiemon style Imari is another type of Imari, but it tends to be categorized separately in Europe. 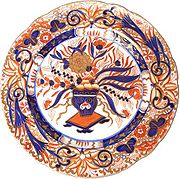 Imari was simply the trans-shipment port for Arita wares. The kiln
Kiln
A kiln is a thermally insulated chamber, or oven, in which a controlled temperature regime is produced. Uses include the hardening, burning or drying of materials...
s at Arita formed the heart of the Japanese porcelain
Porcelain
Porcelain is a ceramic material made by heating raw materials, generally including clay in the form of kaolin, in a kiln to temperatures between and...
industry, which developed in the 17th century, after kaolin was discovered in 1616 by an immigrant Korean potter, Yi Sam-pyeong or Kanage Sambei (1579–1655). Kanage Sambei is the name he adopted after he naturalized to Japan. Yi Sam-pyeong voluntarily emigrated to Japan leading his extended family (180 persons) responding to the offer of privileged position in Japan, after the Japanese invasions of Korea (1592–1598). After the discovery, Arita kilns began to produce revised Korean style blue and white porcelains known as Shoki-Imari. There are many other Korean descendant potters other than Kanagae family, and they produced Shoki-Imari. Shoki-Imari is limited to blue and white.
In mid-17th century there are also a lot of Chinese refugees in Northern Kyushu due to the turmoil on Chinese continent, and it is said one of them brought coloring technique to Arita. Thus Shoki-Imari developed into Ko-KutaniImari. Ko-Kutani is produced around 1650 for both export and domestic market. Blue and white porcelain were continued to be produced and they are called Ai-Kutani. Ko-Kutani Imari for export market usually adopted Chinese design structure such as kraak style, whereas Ai-Kutani for the domestic market are highly unique in design, are valued very much among collectors.
Ko-Kutani style evolved into Kakiemon style Imari, which was produced for about 50years around 1700. Imari achieved its technical and aesthetic peak in Kakiemon style, and they dominated European market. Blue and white Kakiemon is called Ai-Kakiemon. Kakiemon style transformed itself to Kinrande in 18th century. Kinrande use underglaze blue and overglaze red and gold, and later some other colors.
Imari bigan to be exported to Europe, because the Chinese kilns at Ching-te-Chen were damaged in the political chaos and the new Qing dynasty
Qing Dynasty
The Qing Dynasty was the last dynasty of China, ruling from 1644 to 1912 with a brief, abortive restoration in 1917. It was preceded by the Ming Dynasty and followed by the Republic of China....
government stopped trade in 1656–1684. Exported to Europe was made through the Dutch East India Company
Dutch East India Company
The Dutch East India Company was a chartered company established in 1602, when the States-General of the Netherlands granted it a 21-year monopoly to carry out colonial activities in Asia...
, but the designation "Imari porcelain" in Europe connotes Arita wares mostly Kinrande Imari.

Export of Imari to Europe stopped in mid-18th century when China began export to Europe again, since Imari was not able to compete against China due to high labor cost. By that time, however, both Imari and Kakiemon style were already so popular among Europeans, Chinese export porcelain copied both Imari and Kakiemon style, which is called Chinese Imari. At the same time, European kilns, such as Meisen also tried to copy Imari and Kakiemon.
Export of Imari surged again in late 19th century (Meiji era) when Japonism flourished in Europe. Thus in western world today, you can find two kind of Imari, one is those exported in mid Edo period and those exported in Meiji. But those two types are completely different from the viewpoint of collectors, though Kinrande appearances are similar.
Nabeshima is the other category of Imari. Nabeshima is a kind of Imari produced in Lord Nabeshima's official kiln only for the official use of Lord Nabeshima throughout Edo period. As such, Nabeshima is characterized by its distinctively noble design.

Though sophisticated wares in authentic Japanese styles were being made at Arita for the fastidious home market, Europeans Style designations of Arita porcelain is formed after blue and white kraak porcelains imitating Chinese underglaze "blue-and-white" wares or made use of enamel
Vitreous enamel
Vitreous enamel, also porcelain enamel in U.S. English, is a material made by fusing powdered glass to a substrate by firing, usually between 750 and 850 °C...
colors over underglaze
Underglaze
Underglaze is a method of decorating ceramic articles, the decoration is applied to the surface before it is glazed. Because the glaze will subsequently cover it such decoration is completely durable, but because the subsequent glost firing is at a higher temperature than used in on-glaze...
s of cobalt blue
Cobalt blue
Cobalt blue is a cool, slightly desaturated blue color, historically made using cobalt salts of alumina. It is used in certain ceramics and painting; the different cobalt pigment smalt, based on silica, is more often used directly in tinted transparent glasses...
and iron red. The ware often used copious gilding
Gilding
The term gilding covers a number of decorative techniques for applying fine gold leaf or powder to solid surfaces such as wood, stone, or metal to give a thin coating of gold. A gilded object is described as "gilt"...
, sometimes with spare isolated sprigged vignette
Vignette (graphic design)
Vignettes, in graphic design, are decorative designs usually in books, used both to separate sections or chapters and to decorate borders.In Descriptive, or Analytical Bibliography for the hand-press period a vignette refers to an engraved design printed using a copper-plate press, on a page that...
s, but often densely patterned in compartments. There were two quite different styles in these wares. "On the one hand a gaudy, brash brightly coloured and highly decorated style, the Imari style". Globular Imari teapot
Teapot
A teapot is a vessel used for steeping tea leaves or a herbal mix in near-boiling water. Tea may be either in a tea bag or loose, in which case a tea strainer will be needed, either to hold the leaves as they steep or to catch the leaves inside the teapot when the tea is poured...
s with swan-necked spouts helped establish the classic European form for these new necessities of life.

Early experiments with overglaze colored enamels at Arita are associated with the famous Sakaida Kakiemon
Sakaida Kakiemon
Sakaida Kakiemon , or Sakaida Kizaemon was a Japanese potter who invented the style known after him as Kakiemon. He worked in association with Higashijima Tokue, and created the first enamelled porcelain in Japan...
(1596–1666), whose name is memorialized in "Kakiemon
Kakiemon
Kakiemon wares were produced at the factories of Arita, Saga Prefecture, Japan from the mid-17th century, with much in common with the Chinese "Famille Verte" style...
" ware, the other main tradition in lightly fired overglaze enamel decors. Dutch traders had a monopoly on the insatiable export trade, the first large order being placed at Arita by the Dutch East India Company in 1656. The trade peaked in the late 17th century and was slowly replaced by Chinese kilns in the early 18th century; it ended in 1756, as social conditions in China settled with the full establishment of the Qing Dynasty. Imitating Arita designs, fine "Chinese Imari" export wares were produced in the 18th century, eclipsing the original Japanese exports.

Imari patterns, as well as "Kakiemon" designs and palette of colors, influenced some early Orient
Orient
The Orient means "the East." It is a traditional designation for anything that belongs to the Eastern world or the Far East, in relation to Europe. In English it is a metonym that means various parts of Asia.- Derivation :...
alizing wares produced by the porcelain manufactories at Meissen
Meissen porcelain
Meissen porcelain or Meissen china is the first European hard-paste porcelain that was developed from 1708 by Ehrenfried Walther von Tschirnhaus. After his death that October, Johann Friedrich Böttger, continued his work and brought porcelain to the market...
, Chantilly
Chantilly porcelain
Chantilly porcelain is French soft-paste porcelain produced between 1730 and 1800 by the manufactory of Chantilly in Oise, France.-Foundation:...
, or later at Vincennes
Vincennes porcelain
The Vincennes porcelain manufactory was established in 1740 in the disused royal Château de Vincennes, in Vincennes, east of Paris, which was from the start the main market for its wares.-History:...
.

European centers imitated the style of "Imari" wares, initially in faience
Faience
Faience or faïence is the conventional name in English for fine tin-glazed pottery on a delicate pale buff earthenware body, originally associated with Faenza in northern Italy. The invention of a white pottery glaze suitable for painted decoration, by the addition of an oxide of tin to the slip...
at Delft
Delft
Delft is a city and municipality in the province of South Holland , the Netherlands. It is located between Rotterdam and The Hague....
in the Netherlands, and in the early 19th century at Robert Chamberlain's factory at Worcester.