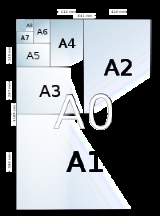 
ISO 216 specifies international standard
International Organization for Standardization
The International Organization for Standardization , widely known as ISO, is an international standard-setting body composed of representatives from various national standards organizations. Founded on February 23, 1947, the organization promulgates worldwide proprietary, industrial and commercial...
(ISO) paper size
Paper size
Many paper size standards conventions have existed at different times and in different countries. Today there is one widespread international ISO standard and a localised standard used in North America . The paper sizes affect writing paper, stationery, cards, and some printed documents...
s used in most countries in the world today. It defines the "A" and "B" series of paper sizes, including A4, the most commonly available size. Two supplementary standards, ISO 217
ISO 217
The ISO 217:1995 standard defines the RA and SRA paper formats.These paper series are untrimmed raw paper. RA stands for “raw format A” and SRA stands for “supplementary raw format A”. The RA and SRA formats are slightly larger than the corresponding A series formats. This allows bleed on printed...
and ISO 269, define related paper sizes; the ISO 269 "C" series is commonly listed alongside the A and B sizes.

All ISO 216, ISO 217 and ISO 269 paper sizes have the same aspect ratio
Aspect ratio
The aspect ratio of a shape is the ratio of its longer dimension to its shorter dimension. It may be applied to two characteristic dimensions of a three-dimensional shape, such as the ratio of the longest and shortest axis, or for symmetrical objects that are described by just two measurements,...
,

. This ratio has the unique property that when cut or folded in half lengthwise, the halves also have the same aspect ratio. Each ISO paper size is one half of the area of the next size up.

The main advantage of this system is its scaling: if a sheet with an aspect ratio of √2 is divided into two equal halves parallel to its shortest sides, then the halves will again have an aspect ratio of √2. Folded brochures of any size can be made by using sheets of the next larger size, e.g. A4 sheets are folded to make A5 brochures. The system allows scaling without compromising the aspect ratio from one size to another – as provided by office photocopiers, e.g. enlarging A4 to A3 or reducing A3 to A4. Similarly, two sheets of A4 can be scaled down and fit exactly 1 sheet without any cutoff or margins.

The weight of each sheet is also easy to calculate given the basis weight in grams
Metric system
The metric system is an international decimalised system of measurement. France was first to adopt a metric system, in 1799, and a metric system is now the official system of measurement, used in almost every country in the world...
per square metre (g/m² or "gsm"). Since an A0 sheet has an area of 1 m², its weight in grams is the same as its basis weight in g/m². A standard A4 sheet made from 80 g/m² paper weighs 5g, as it is one 16th (four halvings) of an A0 page. Thus the weight, and the associated postage rate, can be easily calculated by counting the number of sheets used.

Paper in the A series format has a

aspect ratio, although this is rounded to the nearest millimetre. A0 is defined so that it has an area of 1 square metre
Square metre
The square metre or square meter is the SI derived unit of area, with symbol m2 . It is defined as the area of a square whose sides measure exactly one metre...
, prior to the above mentioned rounding. Successive paper sizes in the series (A1, A2, A3, etc.) are defined by halving the preceding paper size, cutting parallel to its shorter side (so that the long side of A(n+1) is the same length as the short side of An, again prior to rounding).

The most frequently used of this series is the size A4 which is 210 millimetre. For comparison, the letter
Letter (paper size)
Letter or US Letter is the most common paper size for office use in several countries, including the United States, Canada, Mexico, Bolivia, Colombia, Venezuela, the Philippines, and Chile. It measures 8.5 by 11 inches ....
paper size commonly used in North America
North America
North America is a continent wholly within the Northern Hemisphere and almost wholly within the Western Hemisphere. It is also considered a northern subcontinent of the Americas...
(8.5" x 11") is approximately 6 mm (0.24 in) wider and 18 mm (0.71 in) shorter than A4.

or an aspect ratio of

in metres and without rounding off is the geometric sequence:

. The paper size A

thus has the dimension

The exact millimetre measurement of the long side of A

The B series are defined in the standard as follows: "A subsidiary series of sizes is obtained by placing the geometrical means between adjacent sizes of the A series in sequence." The use of the geometric mean means that each step in size: B0, A0, B1, A1, B2 … is smaller than the previous by an equal scaling. In a similar manner to the A series; the lengths of the B series still have the ratio

, and folding one in half gives the next in the series. The shorter side of B0 is exactly 1m.

There is also an incompatible Japanese B series which the JIS defines to have 1.5 times the area of the corresponding JIS A series (which is identical to the ISO A series). Thus, the lengths of JIS B series paper are

times those of A-series paper. By comparison, the lengths of ISO B series paper are

times those of A-series paper.

For the ISO B series, the exact millimetre measurement of the long side of B

The C series formats are geometric means between the B series and A series formats with the same number, (e.g., C2 is the geometric mean between B2 and A2). The C series formats are used mainly for envelope
Envelope
An envelope is a common packaging item, usually made of thin flat material. It is designed to contain a flat object, such as a letter or card....
s. An A4 page will fit into a C4 envelope. C series envelopes follow the same ratio principle as the A series pages. For example, if an A4 page is folded in half so that it is A5 in size, it will fit into a C5 envelope (which will be the same size as a C4 envelope folded in half).

The exact millimetre measurement of the long side of C

The tolerances specified in the standard are:

Before the adoption of ISO 216, many different paper formats were used internationally. These formats did not fit into a coherent system and were defined in terms of non-metric units.

The ISO 216 formats are organized around the ratio

; two sheets next to each other together have the same ratio, sideways. In scaled photocopying, for example, two A4 sheets reduced to A5 size fit exactly onto one A4 sheet, and an A4 sheet in magnified size onto an A3 sheet, in each case there is neither waste nor want.

The principal countries not generally using the ISO paper sizes are the United States
United States
The United States of America is a federal constitutional republic comprising fifty states and a federal district...
, Canada
Canada
Canada is a North American country consisting of ten provinces and three territories. Located in the northern part of the continent, it extends from the Atlantic Ocean in the east to the Pacific Ocean in the west, and northward into the Arctic Ocean...
and Venezuela
Venezuela
Venezuela , officially called the Bolivarian Republic of Venezuela , is a tropical country on the northern coast of South America. It borders Colombia to the west, Guyana to the east, and Brazil to the south...
, which use the Letter, Legal and Executive system. Although they have also officially adopted the ISO 216 paper format, Mexico
Mexico
The United Mexican States , commonly known as Mexico , is a federal constitutional republic in North America. It is bordered on the north by the United States; on the south and west by the Pacific Ocean; on the southeast by Guatemala, Belize, and the Caribbean Sea; and on the east by the Gulf of...
, The Philippines and Chile
Chile
Chile ,officially the Republic of Chile , is a country in South America occupying a long, narrow coastal strip between the Andes mountains to the east and the Pacific Ocean to the west. It borders Peru to the north, Bolivia to the northeast, Argentina to the east, and the Drake Passage in the far...
also use most U.S. paper sizes in ordinary usage.

Rectangular
Rectangle
In Euclidean plane geometry, a rectangle is any quadrilateral with four right angles. The term "oblong" is occasionally used to refer to a non-square rectangle...
sheets of paper with the ratio

are popular in paper folding
Paper folding
Paper craft is the collection of art forms employing paper or card as the primary artistic medium for the creation of three-dimensional objects. It is the most widely used material in arts and crafts. It lends itself to a wide range of techniques, it can for instance be folded, cut, glued,...
, where they are sometimes called "A4 rectangles" or "silver rectangles". However, in other contexts, the term "silver rectangle" can also refer to a rectangle in the proportion