Encyclopedia
The Hyblaean Mountains are a mountain range
Mountain range
A mountain range is a single, large mass consisting of a succession of mountains or narrowly spaced mountain ridges, with or without peaks, closely related in position, direction, formation, and age; a component part of a mountain system or of a mountain chain...
in south-eastern Sicily
Sicily
Sicily is a region of Italy, and is the largest island in the Mediterranean Sea. Along with the surrounding minor islands, it constitutes an autonomous region of Italy, the Regione Autonoma Siciliana Sicily has a rich and unique culture, especially with regard to the arts, music, literature,...
, Italy
Italy
Italy , officially the Italian Republic languages]] under the European Charter for Regional or Minority Languages. In each of these, Italy's official name is as follows:;;;;;;;;), is a unitary parliamentary republic in South-Central Europe. To the north it borders France, Switzerland, Austria and...
. They are included in the provinces of Ragusa
Province of Ragusa
The Province of Ragusa is a province in the autonomous region of Sicily in Italy, located in the south-east of the island. Its capital is the city of Ragusa, which is the most southerly provincial capital in Italy.-Geography:...
, Syracuse and Catania
Province of Catania
Catania is a province in the autonomous island region of Sicily in Italy. Its capital is the city of Catania.It has an area of 3,552 km², and a total population of 1,073,881 . There are 58 comunes in the province, see Comunes of the Province of Catania...
, and reaches the highest altitude with Monte Lauro
Monte Lauro
Mount Lauro is a mountain reaching 986 metres located in south-eastern Sicily belonging to the chain of Hyblaean Mountains, stretching between three provinces of Catania, Ragusa and Siracusa...
, at 986 m.

The range is composed of white limestone
Limestone
Limestone is a sedimentary rock composed largely of the minerals calcite and aragonite, which are different crystal forms of calcium carbonate . Many limestones are composed from skeletal fragments of marine organisms such as coral or foraminifera....
rocks, characterized by Karst topography
Karst topography
Karst topography is a geologic formation shaped by the dissolution of a layer or layers of soluble bedrock, usually carbonate rock such as limestone or dolomite, but has also been documented for weathering resistant rocks like quartzite given the right conditions.Due to subterranean drainage, there...
. The name derives from the Siculi king Hyblon, who gave a portion of his territory to Greek colonists to build the town of Megara Hyblaea
Megara Hyblaea
Megara Hyblaea – perhaps identical with Hybla Major – is the name of an ancient Greek colony in Sicily, situated near Augusta on the east coast, north-northwest of Syracuse, Italy, on the deep bay formed by the Xiphonian promontory...
. The rivers eroded the plateau, forming numerous and deep canyons. In the coastal area sandstone
Sandstone
Sandstone is a sedimentary rock composed mainly of sand-sized minerals or rock grains.Most sandstone is composed of quartz and/or feldspar because these are the most common minerals in the Earth's crust. Like sand, sandstone may be any colour, but the most common colours are tan, brown, yellow,...
is also present, here called giuggiulena. In some areas, such as that of Monte Lauro
Monte Lauro
Mount Lauro is a mountain reaching 986 metres located in south-eastern Sicily belonging to the chain of Hyblaean Mountains, stretching between three provinces of Catania, Ragusa and Siracusa...
(once part of submerged volcanic complex), volcanic rocks are also present.

The Hyblaean Mountains are characterized by gentle slopes, interrupted by sharp valleys. In the central area are numerous woods which are intermingled with the typical dry stone
Dry stone
Dry stone is a building method by which structures are constructed from stones without any mortar to bind them together. Dry stone structures are stable because of their unique construction method, which is characterized by the presence of a load-bearing facade of carefully selected interlocking...
walls of south-eastern Sicily. The more populated coast has instead terraced hills, with Mediterranean vegetation, alternated to a plateau with huge cultivations of olive trees, vine
Vine
A vine in the narrowest sense is the grapevine , but more generally it can refer to any plant with a growth habit of trailing or scandent, that is to say climbing, stems or runners...
s, citrus fruit and almond
Almond
The almond , is a species of tree native to the Middle East and South Asia. Almond is also the name of the edible and widely cultivated seed of this tree...
s. Other grows include grain and maize.

Main attraction of the area include the Baroque towns of Ragusa
Ragusa, Italy
Ragusa is a city and comune in southern Italy. It is the capital of the province of Ragusa, on the island of Sicily, with around 75,000 inhabitants. It is built on a wide limestone hill between two deep valleys, Cava San Leonardo and Cava Santa Domenica...
, Modica
Modica
-External links:*...
and Palazzolo Acreide and the Necropolis of Pantalica
Necropolis of Pantalica
The Necropolis of Pantalica is a large necropolis in Sicily with over 5000 tombs dating from the 13th to the 7th centuries BC. Pantalica is situated in the valleys of the rivers Anapo and Calcinara, between the towns of Ferla and Sortino in south-eastern Sicily...
and Cava Ispica
Ispica
Ispica is a city and comune in the south of Sicily, Italy. It is 30 km from Ragusa, 50 km from Syracuse, and 90 km away from La Valletta, on the coast of Malta...
.

The highest peaks of the Monti Iblei are:
minors: 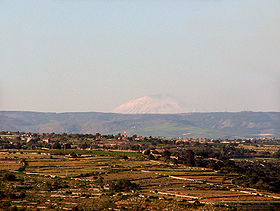 The range is drained
Drainage
Drainage is the natural or artificial removal of surface and sub-surface water from an area. Many agricultural soils need drainage to improve production or to manage water supplies.-Early history:...
by several rivers, which flow into either the Mediterranean sea
Mediterranean Sea
The Mediterranean Sea is a sea connected to the Atlantic Ocean surrounded by the Mediterranean region and almost completely enclosed by land: on the north by Anatolia and Europe, on the south by North Africa, and on the east by the Levant...
or the Ionian sea
Ionian Sea
The Ionian Sea , is an arm of the Mediterranean Sea, south of the Adriatic Sea. It is bounded by southern Italy including Calabria, Sicily and the Salento peninsula to the west, southern Albania to the north, and a large number of Greek islands, including Corfu, Zante, Kephalonia, Ithaka, and...
.