Encyclopedia
Ispica is a city and comune
Comune
In Italy, the comune is the basic administrative division, and may be properly approximated in casual speech by the English word township or municipality.-Importance and function:...
in the south of Sicily
Sicily
Sicily is a region of Italy, and is the largest island in the Mediterranean Sea. Along with the surrounding minor islands, it constitutes an autonomous region of Italy, the Regione Autonoma Siciliana Sicily has a rich and unique culture, especially with regard to the arts, music, literature,...
, Italy
Italy
Italy , officially the Italian Republic languages]] under the European Charter for Regional or Minority Languages. In each of these, Italy's official name is as follows:;;;;;;;;), is a unitary parliamentary republic in South-Central Europe. To the north it borders France, Switzerland, Austria and...
. It is 30 km from Ragusa
Ragusa, Italy
Ragusa is a city and comune in southern Italy. It is the capital of the province of Ragusa, on the island of Sicily, with around 75,000 inhabitants. It is built on a wide limestone hill between two deep valleys, Cava San Leonardo and Cava Santa Domenica...
, 50 km from Syracuse
Syracuse, Italy
Syracuse is a historic city in Sicily, the capital of the province of Syracuse. The city is notable for its rich Greek history, culture, amphitheatres, architecture, and as the birthplace of the preeminent mathematician and engineer Archimedes. This 2,700-year-old city played a key role in...
, and 90 km away from La Valletta, on the coast of Malta
Malta
Malta , officially known as the Republic of Malta , is a Southern European country consisting of an archipelago situated in the centre of the Mediterranean, south of Sicily, east of Tunisia and north of Libya, with Gibraltar to the west and Alexandria to the east.Malta covers just over in...
. The first mention in a document of Ispica occurred in 1093, in a list of churches and ecclesiastic departments for administrative purposes, but the territory has been colonized since the Bronze Age
Bronze Age
The Bronze Age is a period characterized by the use of copper and its alloy bronze as the chief hard materials in the manufacture of some implements and weapons. Chronologically, it stands between the Stone Age and Iron Age...
.

The city is located on a hill. The main economical activity consists of farming, especially tomatoes, olives, vineyards. There is 10 km of coastline, most of which is sand and dunes, and an island (Porri island) at 2 km from coast.

The town also hosts examples of Sicilian Baroque
Sicilian Baroque
Sicilian Baroque is the distinctive form of Baroque architecture that took hold on the island of Sicily, off the southern coast of Italy, in the 17th and 18th centuries...
architecture such as the Vincenzo Sinatra
Vincenzo Sinatra
Vincenzo Sinatra was a Sicilian architect. He was a pupil of Rosario Gagliardi. Sinatra worked in both the Baroque style and later in Neo-Classical style....
's Basilica di Santa Maria Maggiore, the Annunziata Church, the Carmine monastery
Monastery
Monastery denotes the building, or complex of buildings, that houses a room reserved for prayer as well as the domestic quarters and workplace of monastics, whether monks or nuns, and whether living in community or alone .Monasteries may vary greatly in size – a small dwelling accommodating only...
, and the St. Barthelemy cathedral
Cathedral
A cathedral is a Christian church that contains the seat of a bishop...
. 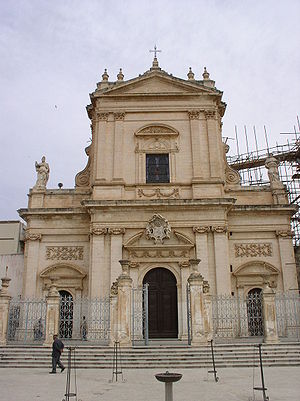 The Cava Ispica (Cave of Ispica) consists of a series of housing units carved in rocky formations. Built prior to the Greek colonization, these houses were used until the end of the nineteenth century. This cave, the most important in Eastern Sicily, is 13 km long and is divided among two other comunes, Modica
Modica
-External links:*...
and Rosolini
Rosolini
Rosolini is a comune in the Province of Syracuse, Sicily . It's located about 200 km southeast of Palermo and about 40 km southwest of Syracuse. As of 31 December 2004, it had a population of 20,927 and an area of 76.2 km².Rosolini borders the following municipalities: Ispica,...
.
The source of this article is wikipedia, the free encyclopedia.  The text of this article is licensed under the GFDL.