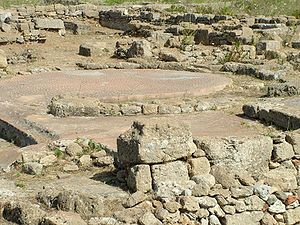 Megara Hyblaea – perhaps identical with Hybla Major
Hybla Major
Hybla Major or Hybla Maior or Hybla Magna – the "Greater Hybla" – was a used to identify the most important of the ancient cities named Hybla in Sicily.-Controversy:...
– is the name of an ancient Greek
Ancient Greece
Ancient Greece is a civilization belonging to a period of Greek history that lasted from the Archaic period of the 8th to 6th centuries BC to the end of antiquity. Immediately following this period was the beginning of the Early Middle Ages and the Byzantine era. Included in Ancient Greece is the...
colony in Sicily
Sicily
Sicily is a region of Italy, and is the largest island in the Mediterranean Sea. Along with the surrounding minor islands, it constitutes an autonomous region of Italy, the Regione Autonoma Siciliana Sicily has a rich and unique culture, especially with regard to the arts, music, literature,...
, situated near Augusta on the east coast, 20 kilometres (12.4 mi) north-northwest of Syracuse
Syracuse, Italy
Syracuse is a historic city in Sicily, the capital of the province of Syracuse. The city is notable for its rich Greek history, culture, amphitheatres, architecture, and as the birthplace of the preeminent mathematician and engineer Archimedes. This 2,700-year-old city played a key role in...
, Italy
Italy
Italy , officially the Italian Republic languages]] under the European Charter for Regional or Minority Languages. In each of these, Italy's official name is as follows:;;;;;;;;), is a unitary parliamentary republic in South-Central Europe. To the north it borders France, Switzerland, Austria and...
, on the deep bay formed by the Xiphonian promontory. There were at least three (and possibly as many as five) cities named "Hybla" in ancient accounts of Sicily which are often confounded with each other, and among which it is sometimes very difficult to distinguish.

It was unquestionably a Greek colony, deriving its origin from the Megara
Megara
Megara is an ancient city in Attica, Greece. It lies in the northern section of the Isthmus of Corinth opposite the island of Salamis, which belonged to Megara in archaic times, before being taken by Athens. Megara was one of the four districts of Attica, embodied in the four mythic sons of King...
in Greece
Ancient Greece
Ancient Greece is a civilization belonging to a period of Greek history that lasted from the Archaic period of the 8th to 6th centuries BC to the end of antiquity. Immediately following this period was the beginning of the Early Middle Ages and the Byzantine era. Included in Ancient Greece is the...
; and the circumstances attending its foundation are related in detail by Thucydides
Thucydides
Thucydides was a Greek historian and author from Alimos. His History of the Peloponnesian War recounts the 5th century BC war between Sparta and Athens to the year 411 BC...
. He tells us that a colony from Megara, under the command of a leader named Lamis, arrived in Sicily about the time that Leontini was founded by the Chalcidic
Chalcis
Chalcis or Chalkida , the chief town of the island of Euboea in Greece, is situated on the strait of the Evripos at its narrowest point. The name is preserved from antiquity and is derived from the Greek χαλκός , though there is no trace of any mines in the area...
colonists, and settled themselves first near the mouth of the river Pantagias, at a place called Trotilon (Latin
Latin
Latin is an Italic language originally spoken in Latium and Ancient Rome. It, along with most European languages, is a descendant of the ancient Proto-Indo-European language. Although it is considered a dead language, a number of scholars and members of the Christian clergy speak it fluently, and...
: Trotilus, modern Brucoli). From thence they removed to Leontini itself, where they dwelt for a time together with the Chalcidians; but were soon afterwards expelled by them, and next established themselves on the promontory or peninsula of Thapsos (Latin: Thapsus, modern Magnisi), near Syracuse. Hence they again removed after the death of Lamis, and, at the suggestion of Hyblon, a Sicilian chief of the surrounding country, finally settled at a place afterwards called the Hyblaean Megara. (Thuc. vi. 4.) Scymnus Chius
Scymnus
Scymnus of Chios was a Greek geographer. He was said to have been the author of a periegesis in prose.An anonymous verse periegesis first published at Augsburg in 1600, originally ascribed to Marcianus of Heraclea, was long thought to be the lost work of Scymnus, but this was shown not to be the...
follows a different tradition, as he describes the establishment of the Chalcidians at Naxos
Naxos (Sicily)
Naxos or Naxus , was an ancient city of Sicily, on the east coast of the island between Catana and Messana...
and that of the Megarians at Hybla as contemporary, and both preceding the foundation of Syracuse, 734 BC. Strabo
Strabo
Strabo, also written Strabon was a Greek historian, geographer and philosopher.-Life:Strabo was born to an affluent family from Amaseia in Pontus , a city which he said was situated the approximate equivalent of 75 km from the Black Sea...
also adopts the same view of the subject, as he represents Megara as founded about the same time with Naxos (735 BC), and before Syracuse. (Scymn. Ch. 271-76; Strab. vi. p. 269.) It is impossible to reconcile the two accounts, but that of Thucydides is probably the most trustworthy. According to this the foundation of Megara may probably be placed about 726 BC. Professor Miller, in her reinvestigation of ancient source materials has determined that they point to various dates of foundation from 758 BC (per the Chronikon
Chronicon (Eusebius)
The Chronicon or Chronicle was a work in two books by Eusebius of Caesarea. It seems to have been compiled in the early 4th century. It contained a world chronicle from Abraham until the vicennalia of Constantine I in 325 AD...
of Eusebius) to 728 BC (from her reconstructions of dates from Thucydides). Of its earlier history we have scarcely any information, but it would appear to have attained to a flourishing condition, as 100 years after its foundation it sent out, in its turn, a colony to the other end of Sicily, where it founded the city of Selinus, which was destined to rise to far greater power than its parent city. (Thuc. vi. 4; Scymn. Ch. 291; Strab. vi. p. 272.)

Nothing more is known of Megara till the period of its destruction by Gelon of Syracuse, about 483 BC, who, after a long siege, made himself master of the city by a capitulation; but, notwithstanding this, caused the bulk of the inhabitants to be sold into slavery, while he established the more wealthy and noble citizens at Syracuse. (Herod. vii. 156; Thuc. vi. 4.) Among the persons thus removed was the celebrated comic poet Epicharmus, who had received his education at Megara, though not a native of that city. (Suda
Suda
The Suda or Souda is a massive 10th century Byzantine encyclopedia of the ancient Mediterranean world, formerly attributed to an author called Suidas. It is an encyclopedic lexicon, written in Greek, with 30,000 entries, many drawing from ancient sources that have since been lost, and often...
, under ; Diog. Laert.
Diogenes Laertius
Diogenes Laertius was a biographer of the Greek philosophers. Nothing is known about his life, but his surviving Lives and Opinions of Eminent Philosophers is one of the principal surviving sources for the history of Greek philosophy.-Life:Nothing is definitively known about his life...
viii. 3.) According to Thucydides, this event took place 245 years after the foundation of Megara, and may therefore be placed about 483 BC. It is certain that Megara never recovered its power and independence. Thucydides distinctly alludes to it as not existing in his time as a city, but repeatedly mentions the locality, on the sea-coast, which was at that time occupied by the Syracusans, but which the Athenian general Lamachus
Lamachus
Lamachus was an Athenian general in the Peloponnesian War. He commanded as early as 435 BCE, and was prominent by the mid 420s. Aristophanes caricatured him in The Acharnians and subsequently honoured his memory in The Frogs...
, during the expedition against Syracuse
Sicilian Expedition
The Sicilian Expedition was an Athenian expedition to Sicily from 415 BC to 413 BC, during the Peloponnesian War. The expedition was hampered from the outset by uncertainty in its purpose and command structure—political maneuvering in Athens swelled a lightweight force of twenty ships into a...
(415–413 BC), proposed to make the head-quarters of their fleet; but his advice was not taken, and in the next spring the Syracusans fortified it. (Thuc. vi. 49, 96.)

From this time we meet with repeated mention of a place named Megara or Megaris (Scyl. p. 4. § 6), which it seems impossible to separate from Hybla, and it is probable that the two were, in fact, identical. The site of this later Megara or Hybla may be fixed, with little doubt, at the mouth of the river Alabus (modern Cantera); but there seems much reason to suppose that the ancient city, the original Greek colony, was situated almost close to the remarkable promontory now occupied by the city of Augusta. It is difficult to believe that this position, the port of which is at least equal to that of Syracuse, while the peninsula itself has the same advantages as that of Ortygia
Ortygia
Ortygia is a little island and it is the historical centre of the city of Syracuse, Sicily. The island, also known as Città Vecchia , contains many historical landmarks...
, should have been wholly neglected in ancient times; and such a station would have admirably served the purposes for which Lamachus urged upon his brother generals the occupation of the vacant site of Megara (Thuc. vi. 49.).

Excavations carried on in 1891 led to the discovery of the northern portion of the western town wall, which in one section served at the same time as an embankment against floods — it was apparently more conspicuous in the time of Philipp Cluver
Philipp Clüver
Philipp Clüver was an Early Modern German geographer and historian.-Life:...
, (Sicilia antiqua, Leiden, 1619) p. 133 — of an extensive necropolis
Necropolis
A necropolis is a large cemetery or burial ground, usually including structural tombs. The word comes from the Greek νεκρόπολις - nekropolis, literally meaning "city of the dead"...
, about 1500 tombs of which have been explored, and of a deposit of votive objects from a temple. The harbour lay to the north of the town.
The source of this article is wikipedia, the free encyclopedia.  The text of this article is licensed under the GFDL.