Encyclopedia
The Necropolis of Pantalica is a large necropolis
Necropolis
A necropolis is a large cemetery or burial ground, usually including structural tombs. The word comes from the Greek νεκρόπολις - nekropolis, literally meaning "city of the dead"...
in Sicily
Sicily
Sicily is a region of Italy, and is the largest island in the Mediterranean Sea. Along with the surrounding minor islands, it constitutes an autonomous region of Italy, the Regione Autonoma Siciliana Sicily has a rich and unique culture, especially with regard to the arts, music, literature,...
with over 5000 tombs dating from the 13th
13th century BC
The 13th century BC was the period from 1300 to 1201 BC.-Events:*1300 BC: Cemetery H culture comes to an end.*1292 BC: End of the Eighteenth dynasty of Egypt, start of the Nineteenth Dynasty....
to the 7th centuries BC
7th century BC
The 7th century BC started the first day of 700 BC and ended the last day of 601 BC.The Assyrian Empire continued to dominate the Near East during this century, exercising formidable power over neighbors like Babylon and Egypt. In the last two decades of the century, however, the empire began to...
. Pantalica is situated in the valleys of the rivers Anapo and Calcinara, between the towns of Ferla
Ferla
Ferla is a town and comune in the Province of Syracuse, Sicily . As of 2007 Ferla had an estimated population of 2,622....
and Sortino
Sortino
Sortino is a town and comune in the Province of Syracuse, Sicily . It is located in the Anapo river valley....
in south-eastern Sicily. Together with the city of Syracuse
Syracuse, Italy
Syracuse is a historic city in Sicily, the capital of the province of Syracuse. The city is notable for its rich Greek history, culture, amphitheatres, architecture, and as the birthplace of the preeminent mathematician and engineer Archimedes. This 2,700-year-old city played a key role in...
, Pantalica is listed as "Syracuse and the Rocky Necropolis of Pantalica" on the list of UNESCO
UNESCO
The United Nations Educational, Scientific and Cultural Organization is a specialized agency of the United Nations...
World Heritage Site
World Heritage Site
A UNESCO World Heritage Site is a place that is listed by the UNESCO as of special cultural or physical significance...
s. 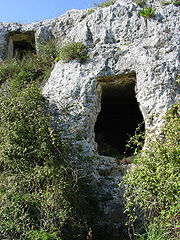 Together with the city of Syracuse, Pantalica is listed as "Syracuse and the Rocky Necropolis of Pantalica" on the list of UNESCO World Heritage Sites.

In the first half of the 13th century BC, all the coastal settlements suddenly disappeared with the arrival of the Sicils and other Italian peoples. The indigenous population abandoned the coastal settlements and took refuge in the hills and unpleasant mountains chosen for their defensive value and they gathered together in great crowds.

The area around the necroplis wasn't only occupied during the Magna Graecia
Magna Graecia
Magna Græcia is the name of the coastal areas of Southern Italy on the Tarentine Gulf that were extensively colonized by Greek settlers; particularly the Achaean colonies of Tarentum, Crotone, and Sybaris, but also, more loosely, the cities of Cumae and Neapolis to the north...
era, but also during the first centuries of the middle ages
Middle Ages
The Middle Ages is a periodization of European history from the 5th century to the 15th century. The Middle Ages follows the fall of the Western Roman Empire in 476 and precedes the Early Modern Era. It is the middle period of a three-period division of Western history: Classic, Medieval and Modern...
when populations displaced by the invading barbarians, pirates and, later, the Saracen
Saracen
Saracen was a term used by the ancient Romans to refer to a people who lived in desert areas in and around the Roman province of Arabia, and who were distinguished from Arabs. In Europe during the Middle Ages the term was expanded to include Arabs, and then all who professed the religion of Islam...
s looked for a safe refuge and found it in this near inaccessible area. Even today, there remains visible homes built into the rock when the area was part of the Byzantine Empire
Byzantine Empire
The Byzantine Empire was the Eastern Roman Empire during the periods of Late Antiquity and the Middle Ages, centred on the capital of Constantinople. Known simply as the Roman Empire or Romania to its inhabitants and neighbours, the Empire was the direct continuation of the Ancient Roman State...
and remains of the small painted chapels called Grotta del Crocifisso, Grotta di San Nicolicchio and Grotta di San Micidario.

Pantalica is covered by necropolis over a large area:

The palazzo dell’Anaktoron, is a megalithic building of large blocks, with diverse rectangular rooms and what seems to be such a good imitation of Mycenaean
Mycenaean Greece
Mycenaean Greece was a cultural period of Bronze Age Greece taking its name from the archaeological site of Mycenae in northeastern Argolis, in the Peloponnese of southern Greece. Athens, Pylos, Thebes, and Tiryns are also important Mycenaean sites...
palaces that some academics have hypothesized that there were Mycenaean workshops in Sicily. These come from the earliest known remains of Pantalica (12-11th century BC).