In geometry
Geometry
Geometry arose as the field of knowledge dealing with spatial relationships. Geometry was one of the two fields of pre-modern mathematics, the other being the study of numbers ....
, a honeycomb is a space filling or close packing of polyhedral or higher-dimensional cells, so that there are no gaps. It is an example of the more general mathematical tiling or tessellation
Tessellation
A tessellation or tiling of the plane is a pattern of plane figures that fills the plane with no overlaps and no gaps. One may also speak of tessellations of parts of the plane or of other surfaces. Generalizations to higher dimensions are also possible. Tessellations frequently appeared in the art...
in any number of dimensions.

Honeycombs are usually constructed in ordinary Euclidean
Euclidean geometry
Euclidean geometry is a mathematical system attributed to the Alexandrian Greek mathematician Euclid, which he described in his textbook on geometry: the Elements. Euclid's method consists in assuming a small set of intuitively appealing axioms, and deducing many other propositions from these...
("flat") space. They may also be constructed in non-Euclidean spaces
Non-Euclidean geometry
Non-Euclidean geometry is the term used to refer to two specific geometries which are, loosely speaking, obtained by negating the Euclidean parallel postulate, namely hyperbolic and elliptic geometry. This is one term which, for historical reasons, has a meaning in mathematics which is much...
, such as hyperbolic honeycombs. Any finite uniform polytope
Polytope
In elementary geometry, a polytope is a geometric object with flat sides, which exists in any general number of dimensions. A polygon is a polytope in two dimensions, a polyhedron in three dimensions, and so on in higher dimensions...
can be projected to its circumsphere to form a uniform honeycomb in spherical space.

There are infinitely many honeycombs, which have only been partially classified. The more regular ones have attracted the most interest, while a rich and varied assortment of others continue to be discovered.

The simplest honeycombs to build are formed from stacked layers or slabs of prisms
Prism (geometry)
In geometry, a prism is a polyhedron with an n-sided polygonal base, a translated copy , and n other faces joining corresponding sides of the two bases. All cross-sections parallel to the base faces are the same. Prisms are named for their base, so a prism with a pentagonal base is called a...
based on some tessellation of the plane. In particular, for every parallelepiped
Parallelepiped
In geometry, a parallelepiped is a three-dimensional figure formed by six parallelograms. By analogy, it relates to a parallelogram just as a cube relates to a square. In Euclidean geometry, its definition encompasses all four concepts...
, copies can fill space, with the cubic honeycomb
Cubic honeycomb
The cubic honeycomb is the only regular space-filling tessellation in Euclidean 3-space, made up of cubic cells. It has 4 cubes around every edge, and 8 cubes around each vertex. Its vertex figure is a regular octahedron....
being special because it is the only regular honeycomb in ordinary (Euclidean) space. Another interesting family is the Hill tetrahedra
Hill tetrahedron
In geometry, the Hill tetrahedra are a family of space-filling tetrahedra. They were discovered in 1896 by M.J.M. Hill, a professor of mathematics at the University College London, who showed that they are scissor-congruent to a cube.- Construction :...
and their generalizations, which can also tile the space.

A uniform honeycomb is a honeycomb in Euclidean 3-space composed of uniform polyhedral
Uniform polyhedron
A uniform polyhedron is a polyhedron which has regular polygons as faces and is vertex-transitive...
cells
Cell (geometry)
In geometry, a cell is a three-dimensional element that is part of a higher-dimensional object.- In polytopes :A cell is a three-dimensional polyhedron element that is part of the boundary of a higher-dimensional polytope, such as a polychoron or honeycomb For example, a cubic honeycomb is made...
, and having all vertices the same (i.e., the group of [isometries of 3-space that preserve the tiling] is transitive on vertices
Vertex-transitive
In geometry, a polytope is isogonal or vertex-transitive if, loosely speaking, all its vertices are the same...
). There are 28 convex
Convex polytope
A convex polytope is a special case of a polytope, having the additional property that it is also a convex set of points in the n-dimensional space Rn...
examples, also called the Archimedean honeycombs
Convex uniform honeycomb
In geometry, a convex uniform honeycomb is a uniform tessellation which fills three-dimensional Euclidean space with non-overlapping convex uniform polyhedral cells.Twenty-eight such honeycombs exist:* the familiar cubic honeycomb and 7 truncations thereof;...
. Of these, just one is regular and one quasiregular:

A honeycomb having all cells identical within its symmetries is said to be cell-transitive or isochoric. A cell of such a honeycomb is said to be a space-filling polyhedron. Known examples include:


Sometimes, two or more different polyhedra may be combined to fill space. Besides many of the uniform honeycombs, another well known example is the Weaire–Phelan structure, adopted from the structure of clathrate hydrate crystals 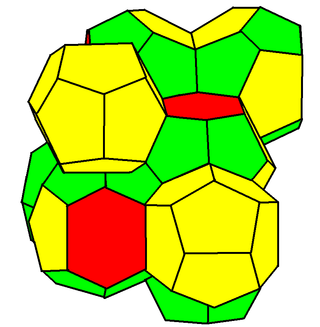 Documented examples are rare. Two classes can be distinguished:

For every honeycomb there is a dual honeycomb, which may be obtained by exchanging:

cells for vertices.
walls for edges.

Honeycombs can also be self-dual. All n-dimensional hypercubic honeycombs with Schlafli symbols {4,3n−2,4}, are self-dual.