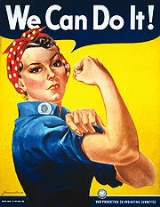 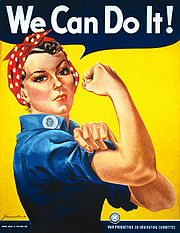 Home front is the informal term commonly used to describe the civilian
Civilian
A civilian under international humanitarian law is a person who is not a member of his or her country's armed forces or other militia. Civilians are distinct from combatants. They are afforded a degree of legal protection from the effects of war and military occupation...
populace of the nation
Nation
A nation may refer to a community of people who share a common language, culture, ethnicity, descent, and/or history. In this definition, a nation has no physical borders. However, it can also refer to people who share a common territory and government irrespective of their ethnic make-up...
at war
War
War is a state of organized, armed, and often prolonged conflict carried on between states, nations, or other parties typified by extreme aggression, social disruption, and usually high mortality. War should be understood as an actual, intentional and widespread armed conflict between political...
as an active support system of their military.

In a modern industrial
Industrialisation
Industrialization is the process of social and economic change that transforms a human group from an agrarian society into an industrial one...
nation, the fighting "teeth" of combat soldiers, depends to a considerable degree on the "tail" of civilian support services—extending all the way to the factories that build materiel
Materiel
Materiel is a term used in English to refer to the equipment and supplies in military and commercial supply chain management....
to support the "military front".

Civilian populations were traditionally uninvolved in combat, except when the fighting happened to reach their dwelling places. However, the expanded destructive capabilities of modern warfare posed an increased direct threat to civilian populations. With the rapid increase of military technology, the term "military effort" has changed to include the "home front" as a reflection of both a civilian "sector" capacity to produce arms, as well as the structural or policy changes which deal with its vulnerability to direct attack.

This continuity of "military effort" from fighting soldier to manufacturing facility has profound effects for the concept of "total war
Total war
Total war is a war in which a belligerent engages in the complete mobilization of fully available resources and population.In the mid-19th century, "total war" was identified by scholars as a separate class of warfare...
." By this logic, if factories and workers producing materiel are part of the war effort, they become legitimate targets for attack, rather than protected noncombatants. Hence in practice, both sides in a conflict attack civilians, with the understanding that these are legitimate and lawful targets in war. This military view of civilian targets has effects on the equity of applied legal principles on which the prosecution of crimes against humanity are based.;

The concept of civilians' involvement in war also developed in connection with general development and change of the ideological attitude to the state. In Feudal society and also in Absolute Monarchy
Absolute monarchy
Absolute monarchy is a monarchical form of government in which the monarch exercises ultimate governing authority as head of state and head of government, his or her power not being limited by a constitution or by the law. An absolute monarch thus wields unrestricted political power over the...
the state was perceived as essentially belonging to the Monarch and the aristocracy, ruling over a mass of passive commoners; wars were perceived of a contest between rival rulers, conducted "above the head" of the commoners, who were expected to submit to the victor.

In contrast, since the French Revolution
French Revolution
The French Revolution , sometimes distinguished as the 'Great French Revolution' , was a period of radical social and political upheaval in France and Europe. The absolute monarchy that had ruled France for centuries collapsed in three years...
the state was increasingly perceived as belonging to "The People", a perception shared—though in different forms—by Democracy
Democracy
Democracy is generally defined as a form of government in which all adult citizens have an equal say in the decisions that affect their lives. Ideally, this includes equal participation in the proposal, development and passage of legislation into law...
, Communism
Communism
Communism is a social, political and economic ideology that aims at the establishment of a classless, moneyless, revolutionary and stateless socialist society structured upon common ownership of the means of production...
, and Fascism
Fascism
Fascism is a radical authoritarian nationalist political ideology. Fascists seek to rejuvenate their nation based on commitment to the national community as an organic entity, in which individuals are bound together in national identity by suprapersonal connections of ancestry, culture, and blood...
. A logical conclusion was that war has become everybody's business and that also those not taken into the armed forces must "do their part", and "fight on the home front".

The importance of civilian manufacturing and support services in a nation's capacity to fight a war first became apparent during the twenty-five years of the French Revolutionary
French Revolutionary Wars
The French Revolutionary Wars were a series of major conflicts, from 1792 until 1802, fought between the French Revolutionary government and several European states...
and Napoleonic
Napoleonic Wars
The Napoleonic Wars were a series of wars declared against Napoleon's French Empire by opposing coalitions that ran from 1803 to 1815. As a continuation of the wars sparked by the French Revolution of 1789, they revolutionised European armies and played out on an unprecedented scale, mainly due to...
wars when the United Kingdom
United Kingdom of Great Britain and Ireland
The United Kingdom of Great Britain and Ireland was the formal name of the United Kingdom during the period when what is now the Republic of Ireland formed a part of it....
was able to finance, and to a lesser extent arm and supply the various coalitions which opposed France. Although Britain had a much smaller population than France, its global maritime trade and its early industrialisation
Industrial Revolution
The Industrial Revolution was a period from the 18th to the 19th century where major changes in agriculture, manufacturing, mining, transportation, and technology had a profound effect on the social, economic and cultural conditions of the times...
meant that its economy was much larger than that of France, which allowed Britain to offset the French manpower advantage.

During the war American Civil War
American Civil War
The American Civil War was a civil war fought in the United States of America. In response to the election of Abraham Lincoln as President of the United States, 11 southern slave states declared their secession from the United States and formed the Confederate States of America ; the other 25...
, the capacity of Northern factories proved as decisive in winning the war as the skills of the generals of either side. During World War I
World War I
World War I , which was predominantly called the World War or the Great War from its occurrence until 1939, and the First World War or World War I thereafter, was a major war centred in Europe that began on 28 July 1914 and lasted until 11 November 1918...
the British Shell Crisis of 1915
Shell Crisis of 1915
The Shell Crisis of 1915 was a shortage of artillery shells on the front lines of World War I, which largely contributed to weakening public appreciation of government of the United Kingdom because it was widely perceived that the production of artillery shells for use by the British Army was...
and the appointment of David Lloyd George
David Lloyd George
David Lloyd George, 1st Earl Lloyd-George of Dwyfor OM, PC was a British Liberal politician and statesman...
as Minister of Munitions
Minister of Munitions
The Minister of Munitions was a British government position created during the First World War to oversee and co-ordinate the production and distribution of munitions for the war effort...
was a recognition that the whole economy would have to be geared for war if the Allies were to prevail on the Western Front
Western Front (World War I)
Following the outbreak of World War I in 1914, the German Army opened the Western Front by first invading Luxembourg and Belgium, then gaining military control of important industrial regions in France. The tide of the advance was dramatically turned with the Battle of the Marne...
. The United States home front during World War I
United States home front during World War I
The home front of the United States in World War I saw a systematic mobilization of the entire population and the entire economy to produce the soldiers, food supplies, munitions, and money needed to win the war...
saw many women taking traditionally men's jobs for the first time in American history.

A factor in Allied victory in World War II
World War II
World War II, or the Second World War , was a global conflict lasting from 1939 to 1945, involving most of the world's nations—including all of the great powers—eventually forming two opposing military alliances: the Allies and the Axis...
was the ability of Allied nations to successfully and efficiently mobilize their civilian industries and domestic populations in order to turn out weapons and goods necessary for waging war. By contrast, mobilization of economic resources in Nazi Germany was so inefficient that some early historians of the Reich's economy concluded (probably incorrectly) that the Nazi leadership must have had an intentional policy of favoring civilian over military production until late in the war. The British, by contrast, had already accomplished mobilization for total war by 1940, thereby increasing the output of weapons—especially heavy bomber
Heavy bomber
A heavy bomber is a bomber aircraft of the largest size and load carrying capacity, and usually the longest range.In New START, the term "heavy bomber" is used for two types of bombers:*one with a range greater than 8,000 kilometers...
s—vastly. During the Nazi
Nazi Germany
Nazi Germany , also known as the Third Reich , but officially called German Reich from 1933 to 1943 and Greater German Reich from 26 June 1943 onward, is the name commonly used to refer to the state of Germany from 1933 to 1945, when it was a totalitarian dictatorship ruled by...
invasion of the Soviet Union
Soviet Union
The Soviet Union , officially the Union of Soviet Socialist Republics , was a constitutionally socialist state that existed in Eurasia between 1922 and 1991....
, Soviet soldiers and civilians moved their industries out of reach of the advancing Germans (sometimes disassembling and reassembling entire factories) and began turning out vast numbers of the superior T-34
T-34
The T-34 was a Soviet medium tank produced from 1940 to 1958. Although its armour and armament were surpassed by later tanks of the era, it has been often credited as the most effective, efficient and influential design of World War II...
tank, the Il-2
Ilyushin Il-2
The Ilyushin Il-2 was a ground-attack aircraft in the Second World War, produced by the Soviet Union in very large numbers...
attack aircraft, and other weapons.