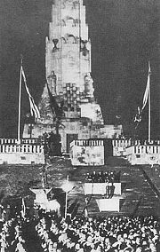 Overview
Total war is a war
War
War is a state of organized, armed, and often prolonged conflict carried on between states, nations, or other parties typified by extreme aggression, social disruption, and usually high mortality. War should be understood as an actual, intentional and widespread armed conflict between political...
in which a belligerent
Belligerent
A belligerent is an individual, group, country or other entity which acts in a hostile manner, such as engaging in combat. Belligerent comes from Latin, literally meaning "to wage war"...
engages in the complete mobilization
Mobilization
Mobilization is the act of assembling and making both troops and supplies ready for war. The word mobilization was first used, in a military context, in order to describe the preparation of the Prussian army during the 1850s and 1860s. Mobilization theories and techniques have continuously changed...
of fully available resource
Factors of production
In economics, factors of production means inputs and finished goods means output. Input determines the quantity of output i.e. output depends upon input. Input is the starting point and output is the end point of production process and such input-output relationship is called a production function...
s and population.

In the mid-19th century, "total war" was identified by scholars as a separate class of warfare. In a total war, there is less differentiation between combatants and civilians than in other conflicts, and sometimes no such differentiation at all, as nearly every human resource, civilians and soldiers alike, can be considered to be part of the belligerent effort.
The phrase can be traced back to the 1936 publication of General Ludendorff’s
Erich Ludendorff
Erich Friedrich Wilhelm Ludendorff was a German general, victor of Liège and of the Battle of Tannenberg...
World War I memoir Der Totale Krieg ("The Total War").

In 1930's, where did fascist and totalitarian leaders take control?

What is the proper meaning and reason for total war?
More
x