Encyclopedia
Materiel is a term used in English
English language
English is a West Germanic language that arose in the Anglo-Saxon kingdoms of England and spread into what was to become south-east Scotland under the influence of the Anglian medieval kingdom of Northumbria...
to refer to the equipment and supplies in military
Military Supply Chain Management
Military supply chain management is a cross-functional approach to procuring, producing and delivering products and services. The broad management scope includes sub-suppliers, suppliers, internal information and funds flow.-Supply:...
and commercial
Business
A business is an organization engaged in the trade of goods, services, or both to consumers. Businesses are predominant in capitalist economies, where most of them are privately owned and administered to earn profit to increase the wealth of their owners. Businesses may also be not-for-profit...
supply chain management
Supply chain management
Supply chain management is the management of a network of interconnected businesses involved in the ultimate provision of product and service packages required by end customers...
.

In a military context, materiel relates to the specific needs of a force to complete a specific mission
Military operation
Military operation is the coordinated military actions of a state in response to a developing situation. These actions are designed as a military plan to resolve the situation in the state's favor. Operations may be of combat or non-combat types, and are referred to by a code name for the purpose...
. The term is also often used in a general sense ("men and materiel") to describe the needs of a functioning army.

Materiel in the commercial distribution
Distribution (business)
Product distribution is one of the four elements of the marketing mix. An organization or set of organizations involved in the process of making a product or service available for use or consumption by a consumer or business user.The other three parts of the marketing mix are product, pricing,...
context comprises the items being moved by the services of or as the products of the business, as distinct from those involved in operating the business itself. 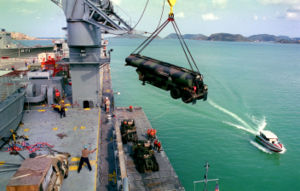