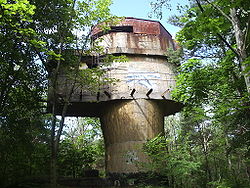 The Hel Fortified Area was a set of Polish
Second Polish Republic
The Second Polish Republic, Second Commonwealth of Poland or interwar Poland refers to Poland between the two world wars; a period in Polish history in which Poland was restored as an independent state. Officially known as the Republic of Poland or the Commonwealth of Poland , the Polish state was...
fortification
Fortification
Fortifications are military constructions and buildings designed for defence in warfare and military bases. Humans have constructed defensive works for many thousands of years, in a variety of increasingly complex designs...
s, constructed on the Hel Peninsula
Hel Peninsula
Hel Peninsula |Nehrung]]) is a 35-km-long sand bar peninsula in northern Poland separating the Bay of Puck from the open Baltic Sea. It is located in Puck County of the Pomeranian Voivodeship.- Geography :...
in northern Poland, in close proximity to the interwar border of Poland and the Third Reich. It was created in 1936, upon a decree of President
President of the Republic of Poland
The President of the Republic of Poland is the Polish head of state. His or her rights and obligations are determined in the Constitution of Poland....
Ignacy Moscicki
Ignacy Moscicki
Ignacy Mościcki was a Polish chemist, politician, and President of Poland . He was the longest-serving President of Poland .-Life:...
. It covered most part of the peninsula, and during Polish September Campaign, it was the last place of Poland to surrender to the invading Wehrmacht
Wehrmacht
The Wehrmacht – from , to defend and , the might/power) were the unified armed forces of Nazi Germany from 1935 to 1945. It consisted of the Heer , the Kriegsmarine and the Luftwaffe .-Origin and use of the term:...
(for more information, see Battle of Hel
Battle of Hel
The Battle of Hel was one of the longest battles of the Invasion of Poland during World War II.The Hel Peninsula, together with the town of Hel, was the pocket of Polish Army resistance that held out the longest against the German invasion...
). During World War II, the naval base in Hel was used as a major training facility for U-boat
U-boat
U-boat is the anglicized version of the German word U-Boot , itself an abbreviation of Unterseeboot , and refers to military submarines operated by Germany, particularly in World War I and World War II...
crews.

After Poland regained independence in the fall of 1918 (see: Partitions of Poland
Partitions of Poland
The Partitions of Poland or Partitions of the Polish–Lithuanian Commonwealth took place in the second half of the 18th century and ended the existence of the Polish–Lithuanian Commonwealth, resulting in the elimination of sovereign Poland for 123 years...
), and the symbolic wedding ceremony with the Baltic Sea
Baltic Sea
The Baltic Sea is a brackish mediterranean sea located in Northern Europe, from 53°N to 66°N latitude and from 20°E to 26°E longitude. It is bounded by the Scandinavian Peninsula, the mainland of Europe, and the Danish islands. It drains into the Kattegat by way of the Øresund, the Great Belt and...
by units of the Polish Army under General Józef Haller de Hallenburg
Józef Haller de Hallenburg
Józef Haller de Hallenburg was a Lieutenant General of the Polish Army, legionary in Polish Legions, harcmistrz , the President of The Polish Scouting and Guiding Association , political and social activist, Stanisław Haller de Hallenburg's cousin.Haller was born in Jurczyce...
(Puck
Puck, Poland
Puck is a town in northwestern Poland with 11,350 inhabitants. It is in Gdańsk Pomerania on the south coast of the Baltic Sea . Previously in the Gdańsk Voivodeship , Puck has been the capital of Puck County in the Pomeranian Voivodeship since 1999.-History:The settlement became a marketplace...
, February 10, 1920), Polish military authorities began preparations of a fortified army garrison along the coast. As early as July 22, 1920 General Kazimierz Sosnkowski
Kazimierz Sosnkowski
Kazimierz Sosnkowski was a Polish independence fighter, politician and Polish Army general.-Life:Sosnkowski served successively as founder and first commander of Związek Walki Czynnej , chief of staff of the 1st Brigade of the Polish Legions, Polish minister of military affairs, vice-president of...
ordered construction of a strategic rail line which ran from Puck, through Wladyslawowo
Wladyslawowo
Władysławowo is a town on the south coast of the Baltic Sea in the Kashubia in Eastern Pomerania region, northern Poland, with 15,015 inhabitants.-Overview:...
, to Hel
Hel, Poland
Hel is a town in Puck County, Pomeranian Voivodeship, Poland, located on the tip of the Hel Peninsula, some 33 kilometres from the Polish mainland.-Early developments:...
. The line was completed in 1921, together with telegraph connection, by the logistics
Military logistics
Military logistics is the discipline of planning and carrying out the movement and maintenance of military forces. In its most comprehensive sense, it is those aspects or military operations that deal with:...
units of the Polish Army. Furthermore, a road, which ran along the line, was constructed.

In 1931, Polish Army began the construction of the naval base in Hel. At the same time, the tip of the peninsula, from Jurata
Jurata
Jurata - popular Polish sea side resort, part of the town of Jastarnia. Located on the Hel Peninsula in forested area between Jastarnia and Hel, on the Baltic Sea, Puck County, Pomeranian Voivodeship.-History:...
to Hel, was placed under military administration. Construction of new houses and tourist facilities was forbidden, movement of civilians was strictly limited. These regulations were strengthened by the decree of President Ignacy Moscicki
Ignacy Moscicki
Ignacy Mościcki was a Polish chemist, politician, and President of Poland . He was the longest-serving President of Poland .-Life:...
, signed on August 21, 1936, which officially created the Hel Fortified Area.

Soon afterwards, large-scale works began. A network of rail connections, mostly narrow-gauge, was built, together with concrete-strengthened artillery positions. Armaments and various kinds of military equipment were brought. Also, the Army started modernization of the naval base at Hel. The base, designed by Wlodzimierz Szawernowski, had been built in 1931, by a Polish-French Enterprise in a location known as Stary Hel (Old Hel). An underground power plant was placed some 1.5 kilometers north of the port, also in adjacent forests, shelters for ammunition, mines and torpedoes were built. Furthermore, underground petroleum storage reservoir was constructed, with a pipeline to the port. It must be noted that even though the Hel Fortified Area was not officially created until 1936, Polish Army had been purchasing equipment for it earlier. In July 1935, four Swedish
Sweden
Sweden , officially the Kingdom of Sweden , is a Nordic country on the Scandinavian Peninsula in Northern Europe. Sweden borders with Norway and Finland and is connected to Denmark by a bridge-tunnel across the Öresund....
-made Bofors
Bofors
The name Bofors has been associated with the iron industry for more than 350 years.Located in Karlskoga, Sweden, the company originates from the hammer mill "Boofors" founded 1646. The modern corporate structure was created in 1873 with the foundation of Aktiebolaget Bofors-Gullspång...
guns (152 mm) were bought and brought to Gdynia
Gdynia
Gdynia is a city in the Pomeranian Voivodeship of Poland and an important seaport of Gdańsk Bay on the south coast of the Baltic Sea.Located in Kashubia in Eastern Pomerania, Gdynia is part of a conurbation with the spa town of Sopot, the city of Gdańsk and suburban communities, which together...
aboard transport ship ORP Wilia. Transported to Hel by train, the guns were mounted in October 1935. 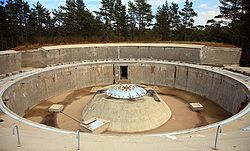 The battle of Hel was one of the longest battles of the Polish September Campaign. Units of the Wehrmacht
Wehrmacht
The Wehrmacht – from , to defend and , the might/power) were the unified armed forces of Nazi Germany from 1935 to 1945. It consisted of the Heer , the Kriegsmarine and the Luftwaffe .-Origin and use of the term:...
approached the peninsula on September 9, 1939. Hel, manned by some 2000 Polish soldiers, was the longest-defended pocket of the Polish Army during the whole campaign. Cut off from the mainland on September 14, and shelled with 280 millimeter guns, it surrendered on October 1, 1939, after a fierce defense, during which many German planes were shot down. Some sources, such as Dictionary of Battles and Sieges, put the date of surrender on October 2, 1939.

During German occupation of Poland, Hel, renamed into German name Hela, was a major training facility of the U-boat
U-boat
U-boat is the anglicized version of the German word U-Boot , itself an abbreviation of Unterseeboot , and refers to military submarines operated by Germany, particularly in World War I and World War II...
crews. Almost immediately after cessation of hostilities, the Germans began works in the base. Among others, a Schleswig-Holstein battery was built for three 40.6 cm SK C/34 guns ("Adolfguns"). These guns shot missiles up to 1030 kilograms, and their range was up to 56 kilometers. In late stages of the war, the Germans began construction of a field airport, but it was never completed. Furthermore, the Wehrmacht added radar stations Würzburg-Riese, as Hel was supposed to defend the main naval port of Gdynia, renamed into Gotenhafen. In the night of April 3–4, 1945, the Germans carried out Operation Walpurgisnacht, during which thousands of soldiers and refugees were transported from Gdynia to Hel. The peninsula repelled several Soviet attacks, and surrendered on May 9, 1945.

In People's Republic of Poland
People's Republic of Poland
The People's Republic of Poland was the official name of Poland from 1952 to 1990. Although the Soviet Union took control of the country immediately after the liberation from Nazi Germany in 1944, the name of the state was not changed until eight years later...
, Hel did not lose its strategic importance. The peninsula was among the most protected military bases of the country. The base was rebuilt and strengthened, with Soviet-made guns of 130mm. However, as time went on, new military doctrine reduced the value of coastal artillery. Because of that, all coastal batteries in Poland were decommissioned. Everything that remained was in 1999 designated as military monuments.

Till this day the entry to some areas of the Hel Fortified Area is restricted by the military, but most places are open to tourists. Among the most notable monuments are: 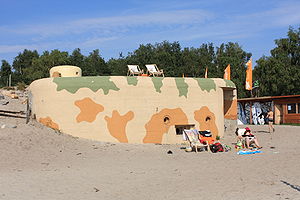 All fortifications of Hel were in 1999 added to the Polish military monuments register.