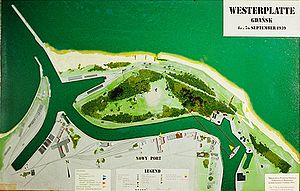 Westerplatte is a peninsula
Peninsula
A peninsula is a piece of land that is bordered by water on three sides but connected to mainland. In many Germanic and Celtic languages and also in Baltic, Slavic and Hungarian, peninsulas are called "half-islands"....
in Gdańsk
Gdansk
Gdańsk is a Polish city on the Baltic coast, at the centre of the country's fourth-largest metropolitan area.The city lies on the southern edge of Gdańsk Bay , in a conurbation with the city of Gdynia, spa town of Sopot, and suburban communities, which together form a metropolitan area called the...
, Poland
Poland
Poland , officially the Republic of Poland , is a country in Central Europe bordered by Germany to the west; the Czech Republic and Slovakia to the south; Ukraine, Belarus and Lithuania to the east; and the Baltic Sea and Kaliningrad Oblast, a Russian exclave, to the north...
, located on the Baltic Sea
Baltic Sea
The Baltic Sea is a brackish mediterranean sea located in Northern Europe, from 53°N to 66°N latitude and from 20°E to 26°E longitude. It is bounded by the Scandinavian Peninsula, the mainland of Europe, and the Danish islands. It drains into the Kattegat by way of the Øresund, the Great Belt and...
coast mouth of the Dead Vistula (one of the Vistula
Vistula
The Vistula is the longest and the most important river in Poland, at 1,047 km in length. The watershed area of the Vistula is , of which lies within Poland ....
delta estuaries
Estuary
An estuary is a partly enclosed coastal body of water with one or more rivers or streams flowing into it, and with a free connection to the open sea....
), in the Gdańsk harbour channel. From 1926 to 1939 it was the location of a Polish Military Transit Depot (WST), sanctioned within the territory of the Free City of Danzig
Free City of Danzig
The Free City of Danzig was a semi-autonomous city-state that existed between 1920 and 1939, consisting of the Baltic Sea port of Danzig and surrounding areas....
(now Gdańsk).

The resort/health spa on the peninsula Westerplatte was established around 1830 and had a beach, forested park, oceanside baths and health spa facilities.

In 1925 the Council of the League of Nations
League of Nations
The League of Nations was an intergovernmental organization founded as a result of the Paris Peace Conference that ended the First World War. It was the first permanent international organization whose principal mission was to maintain world peace...
allowed Poland to keep 88 soldiers on Westerplatte. By September 1939 the crew of Westerplatte had increased to 182 soldiers. They were armed with one 75 mm field gun
Field gun
A field gun is an artillery piece. Originally the term referred to smaller guns that could accompany a field army on the march and when in combat could be moved about the battlefield in response to changing circumstances, as to opposed guns installed in a fort, or to siege cannon or mortars which...
, two 37 mm Bofors antitank guns
Bofors 37 mm
The Bofors 37 mm gun was an anti-tank gun designed by Swedish manufacturer Bofors in the early 1930s. Licensed copies were produced in a number of countries. The gun was used by some European armies during World War II, mainly at the early stage of the war.-Development history:The gun was...
, four mortars
Mortar (weapon)
A mortar is an indirect fire weapon that fires explosive projectiles known as bombs at low velocities, short ranges, and high-arcing ballistic trajectories. It is typically muzzle-loading and has a barrel length less than 15 times its caliber....
and a number of medium machine gun
Medium machine gun
A medium machine gun or MMG, in modern terms, usually refers to a belt-fed automatic firearm firing a full-power rifle cartridge.-History:...
s. There were no real fortifications, only several concrete guardhouse
Guardhouse
A guardhouse is a building used to house personnel and security equipment...
s hidden in the peninsula's forest.

The Polish garrison was separated from Free City of Danzig
Free City of Danzig
The Free City of Danzig was a semi-autonomous city-state that existed between 1920 and 1939, consisting of the Baltic Sea port of Danzig and surrounding areas....
(Gdańsk) by the harbor channel, with only a narrow isthmus
Isthmus
An isthmus is a narrow strip of land connecting two larger land areas usually with waterforms on either side.Canals are often built through isthmuses where they may be particularly advantageous to create a shortcut for marine transportation...
connecting the area to the mainland. In case of war, the defenders were supposed to withstand a sustained attack for 12 hours after which a relief from the main units of the Polish Army were to arrive.

The Polish garrison's commanding officer was Major
Major
Major is a rank of commissioned officer, with corresponding ranks existing in almost every military in the world.When used unhyphenated, in conjunction with no other indicator of rank, the term refers to the rank just senior to that of an Army captain and just below the rank of lieutenant colonel. ...
Henryk Sucharski
Henryk Sucharski
Henryk Sucharski was a Polish military officer and a major in the Polish Army. At the outbreak of World War II, he was one of the commanders of the Westerplatte position in Danzig, which troops under his command defended for seven days against overwhelming odds. Sucharski survived the war and was...
, the executive officer was Captain Franciszek Dąbrowski
Franciszek Dąbrowski
Franciszek Dąbrowski – was an officer of the Polish Navy during the Polish Defensive War against the Nazi German aggression in 1939. In September 1939 he served at Westerplatte military transit depot which took part in the Battle of Westerplatte...
. 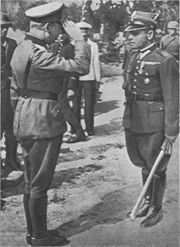 On September 1, 1939, only minutes after the German Luftwaffe
Luftwaffe
Luftwaffe is a generic German term for an air force. It is also the official name for two of the four historic German air forces, the Wehrmacht air arm founded in 1935 and disbanded in 1946; and the current Bundeswehr air arm founded in 1956....
(Airforce) had begun the invasion of Poland
Invasion of Poland (1939)
The Invasion of Poland, also known as the September Campaign or 1939 Defensive War in Poland and the Poland Campaign in Germany, was an invasion of Poland by Germany, the Soviet Union, and a small Slovak contingent that marked the start of World War II in Europe...
by dropping bombs in a series of raids on the city of Wieluń
Wielun
Wieluń is a city in central Poland with 24,347 inhabitants . Situated in the Łódź Voivodeship , it was previously in Sieradz Voivodeship .- History :...
by Junkers Ju 87 Stukas, at 04:45 local time, the battleship Schleswig-Holstein
German battleship Schleswig-Holstein
SMS Schleswig-Holstein, one of the five s, was the last pre-dreadnought battleship built by the German Kaiserliche Marine. The ship was laid down in the Germaniawerft dockyard in Kiel in August 1905 and commissioned into the fleet nearly three years later in July 1908...
, then on a "courtesy visit" to the Free City of Danzig, opened fire on the Polish garrison without warning. This was followed by an attack by Lt. Willhem Henningsen’s storm unit from the Schleswig-Holstein and the "Wehrmacht pioneers." However, soon after crossing the artillery-breached brick wall, the attackers were ambushed by the Polish defenders, with small arms, mortar and machine gun fire from concealed and well-positioned firing points that caught them in a crossfire. Another two assaults that day were repelled as well, with the Germans suffering unexpectedly high losses.

Over the coming days, the Germans repeatedly bombarded Westerplatte with naval artillery
Naval artillery
Naval artillery, or naval riflery, is artillery mounted on a warship for use in naval warfare. Naval artillery has historically been used to engage either other ships, or targets on land; in the latter role it is currently termed naval gunfire fire support...
and heavy field artillery
Field artillery
Field artillery is a category of mobile artillery used to support armies in the field. These weapons are specialized for mobility, tactical proficiency, long range, short range and extremely long range target engagement....
along with dive-bombing raids by Junkers Ju 87 Stukas. Repeated attacks by 3500 German soldiers were repelled by the 180 Polish soldiers for seven days. Major Henryk Sucharski
Henryk Sucharski
Henryk Sucharski was a Polish military officer and a major in the Polish Army. At the outbreak of World War II, he was one of the commanders of the Westerplatte position in Danzig, which troops under his command defended for seven days against overwhelming odds. Sucharski survived the war and was...
had been informed that no help from the Polish Army would come. Cut off, with no reinforcements or chance of resupply, he continued his defense, keeping the main German force stalled at Westerplatte and so preventing further attacks along the Polish coast.

On September 7 the Major decided to surrender, due to lack of ammunition and supplies. As a sign of honor for the soldiers of Westerplatte, German commander, Gen. Eberhardt, allowed Major Sucharski to keep his sword while being taken prisoner.

The ruins of the defenders' barracks and guardhouses are still there. After the war, one of the guardhouses (#1) was converted into a museum. Two 280mm shells from the Schleswig-Holstein prop up its entrance.

A Monument of the Coast Defenders (Pomnik Obrońców Wybrzeża) was unveiled in 1966.