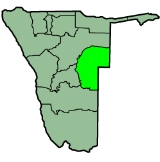 Encyclopedia
Omaheke is one of the thirteen regions of Namibia
Regions of Namibia
The administrative division of Namibia is tabled by Delimitation Commissions and accepted or declined by the National Assembly. The First Delimitation Commission chaired by Judge President Johan Strydom suggested in 1992 that Namibia be divided into 13 Regions, a number that has not been amended...
. Omaheke lies on the eastern border of Namibia and is the Western extension of the Kalahari desert. The name Omaheke is the Herero
Herero language
The Herero language is a language of the Bantu family . It is spoken by the Herero people in Namibia and Botswana...
word for Sandveld. A large part of this region is known as the Sandveld. Gobabis
Gobabis
Gobabis is a town in eastern Namibia. It is the regional capital of the Omaheke Region, and the district capital of the Gobabis electoral constituency. Gobabis is situated down the B6 motorway from Windhoek to Botswana. The town is from the Buitepos border post with Botswana, and serves as an...
is the main centre of this area and also its main business area, as it is linked with the capital of Namibia, Windhoek
Windhoek
Windhoek is the capital and largest city of the Republic of Namibia. It is located in central Namibia in the Khomas Highland plateau area, at around above sea level. The 2001 census determined Windhoek's population was 233,529...
, by rail and paved roads. This infrastructure serves as the main supply line for the region.

All the other population centres in the region are linked with Gobabis by road. Many other services are rendered from Gobabis to the region, such as the Police Divisional Head Quarters, which is situated in Gobabis. Clinics in the region are served by medical practitioners based in Gobabis, and there are two hospitals and a clinic serving the region.

The agricultural patterns of this region is to a large extent homogenous. Most of the 900 commercial and 3,500 communal farmers in this area are cattle
Cattle
Cattle are the most common type of large domesticated ungulates. They are a prominent modern member of the subfamily Bovinae, are the most widespread species of the genus Bos, and are most commonly classified collectively as Bos primigenius...
breeders. A regional office of the Ministry of Agriculture, serving the whole region, is based in Gobabis.

Hunting, including trophy hunting, is one of the major sources of income for the region. This takes place mainly in the winter months, from June to August. During these months, tourists from the northern hemisphere can be seen in the area, enjoying the mild and dry winter climate and collecting trophies.

The northeastern part of the region is still very much a wilderness and beautiful wild Kalahari scenes can be seen by people willing to travel tedious roads and spend nights in the open.

Antropologically, almost the entire Mbanderu and Gobabis-Ju/wa ethnic groups are residing in the region. Furthermore, it is a rich cultural area for Herero, Damara-Nama, Tswana, Afrikaner and German, with a sprinkling of northerners.

A notable event is the annual Meat Festival, which draws visitors from all over.

On the 11th of August 1904 a German armed force with artillery and machine guns which had encircled the Herero who had fled to the Waterberg
Waterberg National Park
Waterberg National Park is a national park in central Namibia on the Waterberg Plateau, 68 km east of Otjiwarongo.The Waterburg Plateau is a particularly prominent location, elevating high above the plains of the Kalahari of Eastern Namibia. Waterburg Park and some 405 km² of surrounding land were...
in Namibia
Namibia
Namibia, officially the Republic of Namibia , is a country in southern Africa whose western border is the Atlantic Ocean. It shares land borders with Angola and Zambia to the north, Botswana to the east and South Africa to the south and east. It gained independence from South Africa on 21 March...
attacked and forced the survivors to flee to the Omaheke desert, where large numbers died. Those who tried to emerge from the desert were killed by German patrols along the perimeter of the Omaheke. This was the turning point in the Herero and Namaqua Genocide
Herero and Namaqua Genocide
The Herero and Namaqua Genocide is considered to have been the first genocide of the 20th century. It took place between 1904 and 1907 in German South-West Africa , during the scramble for Africa...
.

In the 2004 presidential election, the Omaheke Region supported SWAPO's Hifikepunye Pohamba
Hifikepunye Pohamba
Hifikepunye Lucas Pohamba is the second and current President of Namibia. He won the 2004 and 2009 presidential elections overwhelmingly as the candidate of the South West Africa People's Organisation ruling party, taking office in March 2005. He has also been the President of SWAPO since...
with 13,005 votes (46%) but the Ohangwena Region
Ohangwena Region
Ohangwena is one of the thirteen regions of Namibia. The northern and western parts of the region are the most densely populated of this essentially subsistence agricultural region in which small scale mahangu cultivation and the keeping of cattle form the predominant activities...
native did not win a majority of the votes in the region. NUDO's Kuaima Riruako
Kuaima Riruako
Kuaima Riruako is a politician in Namibia. Riruako is also the paramount chief of the Herero and a National Unity Democratic Organisation representative in Parliament, also called "Okahandja Herero" by some...
, chief of the Herero people, received over 7,000 votes (25%), and the DTA's Katuutire Kaura
Katuutire Kaura
Katuutire Kaura is a Namibian politician. He has been President of the Democratic Turnhalle Alliance since 1998 and was Leader of the Official Opposition from 2000 to 2005.Kaura was born in Ombujondjupa, Otjozondjupa Region...
received over 3,700 votes (13%). Only in the much more populated Khomas Region
Khomas Region
Khomas is one of the thirteen regions of Namibia. It contains the capital city Windhoek and provides for this reason superior transportation infrastructure. It has well-developed economical, financial, and trade sectors. Khomas Region occupies 4.5% of the land area of Namibia but has the highest...
and neighboring Otjozondjupa Region did Riruako gain more votes and in no other region did NUDO's candidate gain a higher percentage of the votes.

According to the 2001 census, 39% of the population speak Otjiherero languages, 27% speak Nama/Damara and 12% speak Afrikaans
Afrikaans
Afrikaans is a West Germanic language, spoken natively in South Africa and Namibia. It is a daughter language of Dutch, originating in its 17th century dialects, collectively referred to as Cape Dutch .Afrikaans is a daughter language of Dutch; see , , , , , .Afrikaans was historically called Cape...
at home.