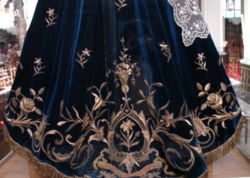 Goldwork is the art of embroidery
Embroidery
Embroidery is the art or handicraft of decorating fabric or other materials with needle and thread or yarn. Embroidery may also incorporate other materials such as metal strips, pearls, beads, quills, and sequins....
using metal threads. It is particularly prized for the way light plays on it. The term "goldwork" is used even when the threads are imitation gold, silver, or copper. The metal wires used to make the threads have never been entirely gold
Gold
Gold is a chemical element with the symbol Au and an atomic number of 79. Gold is a dense, soft, shiny, malleable and ductile metal. Pure gold has a bright yellow color and luster traditionally considered attractive, which it maintains without oxidizing in air or water. Chemically, gold is a...
; they have always been gold-coated silver
Silver
Silver is a metallic chemical element with the chemical symbol Ag and atomic number 47. A soft, white, lustrous transition metal, it has the highest electrical conductivity of any element and the highest thermal conductivity of any metal...
(silver-gilt
Silver-gilt
Silver-gilt or gilded/gilt silver, sometimes known in American English by the French term vermeil, is silver gilded with gold. Most large objects made in goldsmithing that appear to be gold are actually silver-gilt; for example most sporting trophies, medals , and many crown jewels...
) or cheaper metals, and even then the "gold" often contains a very low percent of real gold. Most metal threads are available in silver and sometimes copper
Copper
Copper is a chemical element with the symbol Cu and atomic number 29. It is a ductile metal with very high thermal and electrical conductivity. Pure copper is soft and malleable; an exposed surface has a reddish-orange tarnish...
as well as gold; some are available in colors as well.

Goldwork is always surface embroidery
Surface embroidery
Surface embroidery is any form of embroidery in which the pattern is worked using decorative stitches and laid threads on top of the foundation fabric or canvas rather than through the fabric; it is contrasted with canvas work....
and free embroidery; the vast majority is a form of laid work or couching; that is, the gold threads are held onto the surface of the fabric by a second thread
Yarn
Yarn is a long continuous length of interlocked fibres, suitable for use in the production of textiles, sewing, crocheting, knitting, weaving, embroidery and ropemaking. Thread is a type of yarn intended for sewing by hand or machine. Modern manufactured sewing threads may be finished with wax or...
, usually of fine silk
Silk
Silk is a natural protein fiber, some forms of which can be woven into textiles. The best-known type of silk is obtained from the cocoons of the larvae of the mulberry silkworm Bombyx mori reared in captivity...
. The ends of the thread, depending on type, are simply cut off, or are pulled through to the back of the embroidery and carefully secured with the couching thread. A tool called a mellore or a stilleto is used to help position the threads and create the holes needed to pull them through.

Goldwork was originally developed in Asia, and has been used for at least 2000 years. Its use reached a remarkable level of skill in the Middle Ages
Middle Ages
The Middle Ages is a periodization of European history from the 5th century to the 15th century. The Middle Ages follows the fall of the Western Roman Empire in 476 and precedes the Early Modern Era. It is the middle period of a three-period division of Western history: Classic, Medieval and Modern...
, when a style called Opus Anglicanum
Opus Anglicanum
Opus Anglicanum or English work is a contemporary term for fine needlework of Medieval England done for ecclesiastical or secular use on clothing, hangings or other textiles, often using gold and silver threads on rich velvet or linen grounds...
was developed in England
England
England is a country that is part of the United Kingdom. It shares land borders with Scotland to the north and Wales to the west; the Irish Sea is to the north west, the Celtic Sea to the south west, with the North Sea to the east and the English Channel to the south separating it from continental...
and used extensively in church vestments and hangings. After this period it was also used frequently in the clothing and furnishings of the royalty and nobility throughout Europe, and still later on military and other regalia.

Goldwork is currently a fairly uncommon skill, even among embroiderers who work in other free embroidery styles; it is now most commonly used for the highest-quality church vestments and art embroidery. It has always been reserved for occasional and special use only, due to both the expense of the materials and the time to create the embroidery, and because the threads - no matter how expertly applied - will not hold up to frequent laundering of any kind.

A variety of threads exists, in order to create differing textures.

Passing is the most basic and common thread used in goldwork; it consists of a thin strip of metal wound around a core of cotton
Cotton
Cotton is a soft, fluffy staple fiber that grows in a boll, or protective capsule, around the seeds of cotton plants of the genus Gossypium. The fiber is almost pure cellulose. The botanical purpose of cotton fiber is to aid in seed dispersal....
or silk
Silk
Silk is a natural protein fiber, some forms of which can be woven into textiles. The best-known type of silk is obtained from the cocoons of the larvae of the mulberry silkworm Bombyx mori reared in captivity...
. For gold thread this is typically yellow, or in older examples orange; for silver, white or gray. This is always attached by couching, either one or two threads at a time, and pulled through to the back to secure it. When multiple threads must be laid next to each other, a technique called bricking is used: the position of the couching stitches is offset between rows, producing an appearance similar to a brick wall. This same type of thread is used in making cloth of gold
Cloth of gold
Cloth of gold is a fabric woven with a gold-wrapped or spun weft - referred to as "a spirally spun gold strip". In most cases, the core yarn is silk wrapped with a band or strip of high content gold filé...
.

Japan thread, sometimes called jap, is a cheaper replacement for passing, and is far more commonly used in modern goldwork. It appears nearly identical, but rather than a strip of metal, a strip of foil paper is wrapped around the core.

Buillion or Purl is structurally a very long spring, hollow at the core; it can be stretched apart slightly and couched between the wraps of wire, or cut into short lengths and applied like beads. This thread comes in both shiny and matte versions.

Jaceron or Pearl purl is similar to buillion, but with a much wider piece of metal used in making it, such that it looks like a string of pearl-like beads when couched down between the wraps of metal. Lizerine is a very similar thread.

Freize or Check purl is again similar, but the metal used is shaped differently, producing a faceted, sparkly look.

Faconnee or Crimped purl is almost identical to buillion, but has been crimped at intervals.

Rococco and the similar Crinkle cordonnet are made of wire tightly wrapped around a cotton
Cotton
Cotton is a soft, fluffy staple fiber that grows in a boll, or protective capsule, around the seeds of cotton plants of the genus Gossypium. The fiber is almost pure cellulose. The botanical purpose of cotton fiber is to aid in seed dispersal....
core, with a wavy or kinked appearance.

Milliary wire is a wire core wrapped with finer wire.

Plate is a strip of metal a few millimeters (1/8") wide; often this is used to fill small shapes by folding it back and forth, hiding the couching stitches under the folds.

Flat Worm or simply Oval thread is a thin plate wrapped around a yarn core and flattened slightly. This is used like plate, but is considerably easier to work with.

Twists or Torsade, threads made of multiple strands of metal twisted together are also sometimes used, some of which, such as Soutache
Soutache
A soutache is narrow flat decorative braid, a type of galloon, used in the trimming of drapery or clothing. In clothing soutache is used to conceal a seam....
, sometimes have different colored metals or colored non-metal threads twisted together. These are either couched like passing, with the couching thread visible, or with the thread angled with the twist to make it invisible.

In addition, paillettes or spangles (sequins of real metal), small pieces of applique
Applique
In its broadest sense, an appliqué is a smaller ornament or device applied to another surface. In the context of ceramics, for example, an appliqué is a separate piece of clay added to the primary work, generally for the purpose of decoration...
d rich fabric
Fabric
A fabric is a textile material, short for "textile fabric".Fabric may also refer to:*Fabric , the spatial and geometric configuration of elements within a rock*Fabric , a nightclub in London, England...
or kid leather
Leather
Leather is a durable and flexible material created via the tanning of putrescible animal rawhide and skin, primarily cattlehide. It can be produced through different manufacturing processes, ranging from cottage industry to heavy industry.-Forms:...
, pearls, and real or imitation gems are commonly used as accents, and felt
Felt
Felt is a non-woven cloth that is produced by matting, condensing and pressing woollen fibres. While some types of felt are very soft, some are tough enough to form construction materials. Felt can be of any colour, and made into any shape or size....
or string padding may be used to create raised areas or texture. Silk
Silk
Silk is a natural protein fiber, some forms of which can be woven into textiles. The best-known type of silk is obtained from the cocoons of the larvae of the mulberry silkworm Bombyx mori reared in captivity...
thread work in satin stitch
Satin stitch
In sewing and embroidery, a satin stitch or damask stitch is a series of flat stitches that are used to completely cover a section of the background fabric...
or other stitches is often combined with goldwork, and in some periods goldwork was combined with blackwork embroidery
Blackwork Embroidery
Blackwork Embroidery is a form embroidery using black thread. Sometimes it is counted-thread embroidery which is usually stitched on even-weave fabric. Any black thread can be used, but firmly twisted threads give a better look than embroidery floss. Traditionally blackwork is stitched in silk...
as well.

'Or nué' is a special technique invented in the 15th century, wherein many threads of passing or Japan thread are laid down parallel and touching. By varying the spacing and color of the couching stitches, elaborate, gleaming images can be created. This is not uncommonly used to depict the garments of saints in church embroidery.