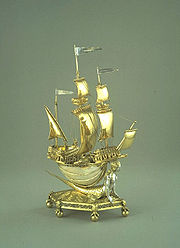 Silver-gilt or gilded/gilt silver, sometimes known in American English by the French term vermeil
Vermeil
Vermeil is a combination of sterling silver, gold, and other precious metals, commonly used as a component in jewelry. A typical example is sterling silver coated with 14 carat gold. To be considered vermeil, the gold must be at least 10 carat and be at least 2.5 micrometres thick...
, is silver
Silver
Silver is a metallic chemical element with the chemical symbol Ag and atomic number 47. A soft, white, lustrous transition metal, it has the highest electrical conductivity of any element and the highest thermal conductivity of any metal...
gilded
Gilding
The term gilding covers a number of decorative techniques for applying fine gold leaf or powder to solid surfaces such as wood, stone, or metal to give a thin coating of gold. A gilded object is described as "gilt"...
with gold
Gold
Gold is a chemical element with the symbol Au and an atomic number of 79. Gold is a dense, soft, shiny, malleable and ductile metal. Pure gold has a bright yellow color and luster traditionally considered attractive, which it maintains without oxidizing in air or water. Chemically, gold is a...
. Most large objects made in goldsmithing that appear to be gold are actually silver-gilt; for example most sporting trophies, medals (such as "gold medal
Gold medal
A gold medal is typically the medal awarded for highest achievement in a non-military field. Its name derives from the use of at least a fraction of gold in form of plating or alloying in its manufacture...
s" in all Olympic Games
Olympic Games
The Olympic Games is a major international event featuring summer and winter sports, in which thousands of athletes participate in a variety of competitions. The Olympic Games have come to be regarded as the world’s foremost sports competition where more than 200 nations participate...
after 1912), and many crown jewels. Apart from being much cheaper than gold, large silver-gilt objects are also much lighter if required to be lifted, and stronger. Compared to plain silver, for delicate objects like the Nef (illustrated), or those with much intricate detail like monstrance
Monstrance
A monstrance is the vessel used in the Roman Catholic, Old Catholic, and Anglican churches to display the consecrated Eucharistic host, during Eucharistic adoration or Benediction of the Blessed Sacrament. Created in the medieval period for the public display of relics, the monstrance today is...
s, gilding greatly reduced the need for cleaning and polishing, and so reduced the risk of damage to them. The "gold" threads used in embroidered goldwork
Goldwork (embroidery)
Goldwork is the art of embroidery using metal threads. It is particularly prized for the way light plays on it. The term "goldwork" is used even when the threads are imitation gold, silver, or copper...
are normally also silver-gilt.

Silver-gilt objects have been made since ancient times across Eurasia
Eurasia
Eurasia is a continent or supercontinent comprising the traditional continents of Europe and Asia ; covering about 52,990,000 km2 or about 10.6% of the Earth's surface located primarily in the eastern and northern hemispheres...
, using a variety of gilding techniques, and a distinctive depletion gilding
Depletion gilding
Depletion gilding is a method for producing a layer of nearly pure gold on an object made of gold alloy by removing the other metals from its surface. It is sometimes referred to as a "surface enrichment" process.-Process:...
technique was developed by the Incas in Pre-Columbian South America. "Overlaying" or folding or hammering on gold foil or gold leaf
Gold leaf
right|thumb|250px|[[Burnishing]] gold leaf with an [[agate]] stone tool, during the water gilding processGold leaf is gold that has been hammered into extremely thin sheets and is often used for gilding. Gold leaf is available in a wide variety of karats and shades...
is mentioned in Homer
Homer
In the Western classical tradition Homer , is the author of the Iliad and the Odyssey, and is revered as the greatest ancient Greek epic poet. These epics lie at the beginning of the Western canon of literature, and have had an enormous influence on the history of literature.When he lived is...
's Odyssey
Odyssey
The Odyssey is one of two major ancient Greek epic poems attributed to Homer. It is, in part, a sequel to the Iliad, the other work ascribed to Homer. The poem is fundamental to the modern Western canon, and is the second—the Iliad being the first—extant work of Western literature...
(Bk vi, 232), and fire-gilding with mercury
Mercury (element)
Mercury is a chemical element with the symbol Hg and atomic number 80. It is also known as quicksilver or hydrargyrum...
dates to at least the 4th century BC, and was the most common method until the Early Modern period
Early modern period
In history, the early modern period of modern history follows the late Middle Ages. Although the chronological limits of the period are open to debate, the timeframe spans the period after the late portion of the Middle Ages through the beginning of the Age of Revolutions...
at least, though dangerous for the workers, as has been known for centuries: Today electroplating
Electroplating
Electroplating is a plating process in which metal ions in a solution are moved by an electric field to coat an electrode. The process uses electrical current to reduce cations of a desired material from a solution and coat a conductive object with a thin layer of the material, such as a metal...
is the most commonly-used method. Keum-boo
Keum-boo
Keum-boo is an ancient Korean gilding technique used to apply thin sheets of gold to silver, to make silver-gilt. Traditionally, this technique is accomplished by first depleting the surface of sterling silver to bring up a thin layer of fine silver...
is a special Korean technique of silver-gilding, using depletion gilding. In China gilt-bronze, also known as ormolu, was more common.

In America the French term vermeil
Vermeil
Vermeil is a combination of sterling silver, gold, and other precious metals, commonly used as a component in jewelry. A typical example is sterling silver coated with 14 carat gold. To be considered vermeil, the gold must be at least 10 carat and be at least 2.5 micrometres thick...
was sometimes used from the mid-19th century, but "silver-gilt" remains the usual term in English and is preferred in academic usage, except for describing American modern jewellery ("vermeil" has a legal definition in the USA).

Silver objects could be gilded at any point, not just when first made, and items regularly handled, such as sets for dressing-tables or tableware, often needed regilding after a few years, as the gold began to wear off. In 18th century London two different silversmiths charged 3 shillings per ounce
Ounce
The ounce is a unit of mass with several definitions, the most commonly used of which are equal to approximately 28 grams. The ounce is used in a number of different systems, including various systems of mass that form part of the imperial and United States customary systems...
of silver for an initial gilding, and 1 shilling and 9 pence
Penny
A penny is a coin or a type of currency used in several English-speaking countries. It is often the smallest denomination within a currency system.-Etymology:...
per ounce for regilding. Often only the interior of cups was gilded, perhaps from concern at the chemical compounds used to clean tarnish from silver.

Fully silver-gilt items are visually indistinguishable from gold, and were no doubt often thought to be solid gold. When the English Commonwealth sold the Crown Jewels of England after the execution of Charles I
Charles I of England
Charles I was King of England, King of Scotland, and King of Ireland from 27 March 1625 until his execution in 1649. Charles engaged in a struggle for power with the Parliament of England, attempting to obtain royal revenue whilst Parliament sought to curb his Royal prerogative which Charles...
they were disappointed in the medieval "Queen Edith's Crowne, formerly thought to be of massy gold, but upon trial found to be of silver gilt", which was valued at only £16, compared to £1,110 for the "imperial crowne". The English Gothic Revival architect, Sir George Gilbert Scott
George Gilbert Scott
Sir George Gilbert Scott was an English architect of the Victorian Age, chiefly associated with the design, building and renovation of churches, cathedrals and workhouses...
was concerned by the morality of this. Gilding of the interior only he accepted, but with all-over gilding "we ... reach the actual boundary of truth and falsehood; and I am convinced that if we adopt this custom we overstep it.... why make our gift look more costly than it is? We increase its beauty, but it is at the sacrifice of truth." Indeed, some Early Medieval silver-gilt Celtic brooch
Celtic brooch
The Celtic brooch, more properly called the penannular brooch, and its closely related type, the pseudo-penannular brooch, are types of brooch clothes fasteners, often rather large...
es had compartments, apparently for small lead weights to aid such deception.
The source of this article is wikipedia, the free encyclopedia.  The text of this article is licensed under the GFDL.