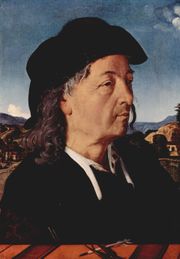 Giuliano da Sangallo was an Italian
Italy
Italy , officially the Italian Republic languages]] under the European Charter for Regional or Minority Languages. In each of these, Italy's official name is as follows:;;;;;;;;), is a unitary parliamentary republic in South-Central Europe. To the north it borders France, Switzerland, Austria and...
sculptor, architect and military engineer
Military engineer
In military science, engineering refers to the practice of designing, building, maintaining and dismantling military works, including offensive, defensive and logistical structures, to shape the physical operating environment in war...
active during the Italian Renaissance.

During the early part of his life Giuliano worked chiefly for Lorenzo de' Medici
Lorenzo de' Medici
Lorenzo de' Medici was an Italian statesman and de facto ruler of the Florentine Republic during the Italian Renaissance. Known as Lorenzo the Magnificent by contemporary Florentines, he was a diplomat, politician and patron of scholars, artists and poets...
, known as 'the Magnificent', for whom he built a fine palace at Poggio a Caiano
Poggio a Caiano
Poggio a Caiano is a town and comune in the Province of Prato, Tuscany region Italy. The town lies 9 km south of the provincial capital of Prato.-The Medici villa:...
, begun in 1485, between Florence and Pistoia
Pistoia
Pistoia is a city and comune in the Tuscany region of Italy, the capital of a province of the same name, located about 30 km west and north of Florence and is crossed by the Ombrone Pistoiese, a tributary of the River Arno.-History:...
, and strengthened the fortifications of Florence, Castellana and other places. Lorenzo also employed him to build a monastery of Augustinian Friars outside the Florentine gate of San Gallo, which was destroyed during the siege of Florence in 1530.

It was from this building that Giuliano received the name of Sangallo, which was afterwards used by so many Italian architects. While still in the pay of Lorenzo, Giuliano visited Naples
Naples
Naples is a city in Southern Italy, situated on the country's west coast by the Gulf of Naples. Lying between two notable volcanic regions, Mount Vesuvius and the Phlegraean Fields, it is the capital of the region of Campania and of the province of Naples...
, and worked there for the king, who sent him back to Florence with presents of money, plate and antique sculpture, the last of which Giuliano presented to his patron Lorenzo. After Lorenzo's death in 1492, Giuliano visited Loreto
Loreto (AN)
Loreto is a hilltown and comune of the Italian province of Ancona, in the Marche. It is mostly famous as the seat of the Basilica della Santa Casa, a popular Catholic pilgrimage site.-Location:...
, and built the dome of the Basilica of the Madonna
Chiesa della Casa Santa, Loreto
The Shrine of the Holy House , is a Catholic place of pilgrimage in Loreto, Italy, containing, according to tradition, the house in which the Virgin Mary lived.-Basilica of the Holy House:...
, in spite of serious difficulties arising from its defective piers, which were already built. In order to gain strength by means of a strong cement, Giuliano built his dome with pozzolana
Pozzolana
Pozzolana, also known as pozzolanic ash , is a fine, sandy volcanic ash. Pozzolanic ash was first discovered and dug in Italy, at Pozzuoli. It was later discovered at a number of other sites as well...
brought from Rome. Soon after this, at the invitation of Pope Alexander VI
Pope Alexander VI
Pope Alexander VI , born Roderic Llançol i Borja was Pope from 1492 until his death on 18 August 1503. He is one of the most controversial of the Renaissance popes, and his Italianized surname—Borgia—became a byword for the debased standards of the Papacy of that era, most notoriously the Banquet...
, Giuliano went to Rome
Rome
Rome is the capital of Italy and the country's largest and most populated city and comune, with over 2.7 million residents in . The city is located in the central-western portion of the Italian Peninsula, on the Tiber River within the Lazio region of Italy.Rome's history spans two and a half...
, and designed the fine panelled ceiling of Santa Maria Maggiore. He was also largely employed by Pope Julius II
Pope Julius II
Pope Julius II , nicknamed "The Fearsome Pope" and "The Warrior Pope" , born Giuliano della Rovere, was Pope from 1503 to 1513...
, both for fortification walls round the Castel Sant'Angelo
Castel Sant'Angelo
The Mausoleum of Hadrian, usually known as the Castel Sant'Angelo, is a towering cylindrical building in Parco Adriano, Rome, Italy. It was initially commissioned by the Roman Emperor Hadrian as a mausoleum for himself and his family...
, and also to build a palace adjoining the church of San Pietro in Vincoli
San Pietro in Vincoli
San Pietro in Vincoli is a Roman Catholic titular church and minor basilica in Rome, Italy, best known for being the home of Michelangelo's statue of Moses, part of the tomb of Pope Julius II.-History:...
, of which Julius had been titular cardinal. Giuliano was much disappointed that Bramante was preferred to himself as architect for the new Basilica of St. Peter, and this led to his returning to Florence, where he did much service as a military engineer and builder of fortresses during the war between Florence and Pisa
Pisa
Pisa is a city in Tuscany, Central Italy, on the right bank of the mouth of the River Arno on the Tyrrhenian Sea. It is the capital city of the Province of Pisa...
. Soon after this Giuliano was recalled to Rome by Julius II, who had much need for his military talents both in Rome itself and also during his attack upon Bologna
Bologna
Bologna is the capital city of Emilia-Romagna, in the Po Valley of Northern Italy. The city lies between the Po River and the Apennine Mountains, more specifically, between the Reno River and the Savena River. Bologna is a lively and cosmopolitan Italian college city, with spectacular history,...
. For about eighteen months in 1514-1515 Giuliano acted as joint-architect to St. Peter's together with Raphael
Raphael
Raffaello Sanzio da Urbino , better known simply as Raphael, was an Italian painter and architect of the High Renaissance. His work is admired for its clarity of form and ease of composition and for its visual achievement of the Neoplatonic ideal of human grandeur...
, but owing to age and ill-health he resigned this office about two years before his death.