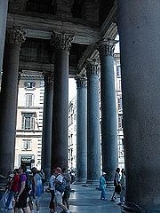 Overview
A portico is a porch
Porch
A porch is external to the walls of the main building proper, but may be enclosed by screen, latticework, broad windows, or other light frame walls extending from the main structure.There are various styles of porches, all of which depend on the architectural tradition of its location...
leading to the entrance of a building, or extended as a colonnade
Colonnade
In classical architecture, a colonnade denotes a long sequence of columns joined by their entablature, often free-standing, or part of a building....
, with a roof structure over a walkway, supported by column
Column
A column or pillar in architecture and structural engineering is a vertical structural element that transmits, through compression, the weight of the structure above to other structural elements below. For the purpose of wind or earthquake engineering, columns may be designed to resist lateral forces...
s or enclosed by walls. This idea was widely used in Ancient Greece
Ancient Greece
Ancient Greece is a civilization belonging to a period of Greek history that lasted from the Archaic period of the 8th to 6th centuries BC to the end of antiquity. Immediately following this period was the beginning of the Early Middle Ages and the Byzantine era. Included in Ancient Greece is the...
and has influenced many cultures, including most Western cultures.

Some noteworthy examples of porticos are the East Portico of the United States Capitol
United States Capitol
The United States Capitol is the meeting place of the United States Congress, the legislature of the federal government of the United States. Located in Washington, D.C., it sits atop Capitol Hill at the eastern end of the National Mall...
, the portico adorning the Pantheon
Pantheon, Rome
The Pantheon ,Rarely Pantheum. This appears in Pliny's Natural History in describing this edifice: Agrippae Pantheum decoravit Diogenes Atheniensis; in columnis templi eius Caryatides probantur inter pauca operum, sicut in fastigio posita signa, sed propter altitudinem loci minus celebrata.from ,...
in Rome
Rome
Rome is the capital of Italy and the country's largest and most populated city and comune, with over 2.7 million residents in . The city is located in the central-western portion of the Italian Peninsula, on the Tiber River within the Lazio region of Italy.Rome's history spans two and a half...
and the portico of University College London
University College London
University College London is a public research university located in London, United Kingdom and the oldest and largest constituent college of the federal University of London...
.

Bologna
Bologna
Bologna is the capital city of Emilia-Romagna, in the Po Valley of Northern Italy. The city lies between the Po River and the Apennine Mountains, more specifically, between the Reno River and the Savena River. Bologna is a lively and cosmopolitan Italian college city, with spectacular history,...
, Italy
Italy
Italy , officially the Italian Republic languages]] under the European Charter for Regional or Minority Languages. In each of these, Italy's official name is as follows:;;;;;;;;), is a unitary parliamentary republic in South-Central Europe. To the north it borders France, Switzerland, Austria and...
, is famous for its porticos.

I am living in Italy temporarily and recently visited Bologna. I was impressed by all the porticoes. Being a practical person, I wondered why they had...
More
x