Encyclopedia
The Georgia Gold Rush was the second significant gold rush
Gold rush
A gold rush is a period of feverish migration of workers to an area that has had a dramatic discovery of gold. Major gold rushes took place in the 19th century in Australia, Brazil, Canada, South Africa, and the United States, while smaller gold rushes took place elsewhere.In the 19th and early...
in the United States
United States
The United States of America is a federal constitutional republic comprising fifty states and a federal district...
. It started in 1828 in the present day Lumpkin County
Lumpkin County, Georgia
Lumpkin County is a county located in the U.S. state of Georgia. As of the 2010 census, the population was 29,966. Its county seat is Dahlonega.- History :...
near county seat Dahlonega, and soon spread through the North Georgia mountains
North Georgia mountains
The Georgia Mountains Region or North Georgia mountains or Northeast Georgia is an area that starts in the northeast corner of Georgia, United States, and spreads in a westerly direction. The mountains in this region are in the Blue Ridge mountain chain that ends in Georgia...
, following the Georgia Gold Belt
Georgia Gold Belt
The largest quantities of gold found in the eastern United States were found in the Georgia Gold Belt, which extends from eastern Alabama to Rabun County, Georgia. The biggest concentration of gold was found in White, Lumpkin, and northern Cherokee counties in Georgia. The gold in the Georgia Gold...
. By the early 1840s, gold became harder to find. When gold was discovered in California
California
California is a state located on the West Coast of the United States. It is by far the most populous U.S. state, and the third-largest by land area...
in 1848 to start the California Gold Rush
California Gold Rush
The California Gold Rush began on January 24, 1848, when gold was found by James W. Marshall at Sutter's Mill in Coloma, California. The first to hear confirmed information of the gold rush were the people in Oregon, the Sandwich Islands , and Latin America, who were the first to start flocking to...
, many Georgia miners moved west.

Although the discovery of gold in Georgia in 1828 was the event that led to the Georgia Gold Rush, there was knowledge of gold in the North Georgia Mountains much earlier. Since the 16th century, American Indians
Indigenous peoples of the Americas
The indigenous peoples of the Americas are the pre-Columbian inhabitants of North and South America, their descendants and other ethnic groups who are identified with those peoples. Indigenous peoples are known in Canada as Aboriginal peoples, and in the United States as Native Americans...
in Georgia told Europe
Europe
Europe is, by convention, one of the world's seven continents. Comprising the westernmost peninsula of Eurasia, Europe is generally 'divided' from Asia to its east by the watershed divides of the Ural and Caucasus Mountains, the Ural River, the Caspian and Black Seas, and the waterways connecting...
an explorers that the small amounts of gold which they possessed came from mountains of the interior. Some poorly documented accounts exist of Spanish or French mining gold in north Georgia between 1560 and 1690, but they are based on supposition and on rumors passed on by Indians. In summing up known sources, Yeates observed: “Many of these accounts and traditions seem to be quite plausible. Nevertheless, it is hardly probable, that the Spaniards would have abandoned mines, which were afterwards found to be quite profitable, as those in North Georgia.” In 1799, gold was discovered in North Carolina
North Carolina
North Carolina is a state located in the southeastern United States. The state borders South Carolina and Georgia to the south, Tennessee to the west and Virginia to the north. North Carolina contains 100 counties. Its capital is Raleigh, and its largest city is Charlotte...
spurring a gold rush there, which led to speculation that there was probably gold in Georgia, too.

Two factors connected with the Georgia gold discovery created the conditions that led to the Georgia Gold Rush in 1829. First, the placer deposit
Placer deposit
In geology, a placer deposit or placer is an accumulation of valuable minerals formed by gravity separation during sedimentary processes. The name is from the Spanish word placer, meaning "alluvial sand". Placer mining is an important source of gold, and was the main technique used in the early...
s found in Georgia meant that gold was relatively easy to collect. Second, word of Georgia’s gold deposits spread rapidly, with stories that captured the imagination.

No one knows which version of the original find is accurate:

These stories and others spread rapidly and “gold fever” soon took hold. 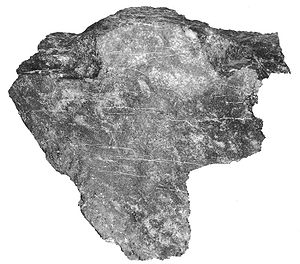 No matter who made the gold discovery in 1828, the gold rush started in 1829 in Lumpkin County and began spreading rapidly. One of the first public accounts was on August 1, 1829, when the Georgia Journal (a Milledgeville
Milledgeville, Georgia
Milledgeville is a city in and the county seat of Baldwin County in the U.S. state of Georgia. It is northeast of Macon, located just before Eatonton on the way to Athens along U.S. Highway 441, and it is located on the Oconee River. The relatively rapid current of the Oconee here made this an...
newspaper), ran the following notice.

GOLD.—A gentleman of the first respectability in Habersham county, writes us thus under date of 22d July: "Two gold mines have just been discovered in this county, and preparations are making to bring these hidden treasures of the earth to use." So it appears that what we long anticipated has come to pass at last, namely, that the gold region of North and South Carolina, would be found to extend into Georgia.

By the early 1840s, most of the “easy” gold had been found, and efforts began to shift to working the known deposits. When news of the California Gold Rush reached Georgia, many miners moved west in search of more gold. The assayer of the Dahlonega Mint tried to convince them to stay. However, even with the departure of many miners, the mines in the Georgia Gold Belt continued to produce gold for years. There were some 500 mines in 37 different counties. It is estimated that Georgia produced about 870,000 troy ounces (24,000 kg) of gold between 1828 and the mid-20th century, when commercial gold production ceased.

Before they were expelled, the Cherokee
Cherokee
The Cherokee are a Native American people historically settled in the Southeastern United States . Linguistically, they are part of the Iroquoian language family...
s gained enough gold-mining experience to participate in later gold rushes in California in 1849 and Colorado
Colorado
Colorado is a U.S. state that encompasses much of the Rocky Mountains as well as the northeastern portion of the Colorado Plateau and the western edge of the Great Plains...
in 1859. Cherokee gold miners gave the name to the town of Cherokee, California
Cherokee, California
Cherokee is a census-designated place in Butte County, California An area inhabited by Maidu Indians prior to the gold rush. But that conversly takes its name from a band of Cherokee prospectors who perfected a mining claim on the site. The population was 69 at the 2010 census...
, as well as to a number of other geographic features in the California gold-mining region.

Experienced gold miners from Georgia played key roles in the beginning of gold mining in Colorado. Georgia gold miners Lewis and Samuel Ralston, along with some displaced Georgia Cherokees, noticed placer gold near the present site of Denver
Denver, Colorado
The City and County of Denver is the capital and the most populous city of the U.S. state of Colorado. Denver is a consolidated city-county, located in the South Platte River Valley on the western edge of the High Plains just east of the Front Range of the Rocky Mountains...
on their way to the new California gold fields in 1850. They returned east in 1857, having failed to strike it rich, but remembered the gold just east of the Rocky Mountains
Rocky Mountains
The Rocky Mountains are a major mountain range in western North America. The Rocky Mountains stretch more than from the northernmost part of British Columbia, in western Canada, to New Mexico, in the southwestern United States...
. William Greeneberry Russell
William Greeneberry Russell
William Greeneberry "Green" Russell was an American prospector and miner.Green Russell lived in Georgia and worked in the California gold fields in the 1850s. Russell was married to a Cherokee woman, and through his connections to the tribe, he heard about an 1849 discovery of gold along the...
led a party of Cherokees and Georgia gold miners back to Colorado in 1858, and began placer mining along the South Platte River
South Platte River
The South Platte River is one of the two principal tributaries of the Platte River and itself a major river of the American Midwest and the American Southwest/Mountain West, located in the U.S. states of Colorado and Nebraska...
in present-day Denver. Other Georgians founded Auraria, Colorado, named after the gold-mining town in Georgia. Auraria merged with Denver soon after, but the neighborhood is still known as Auraria. The town of Golden, Colorado
Golden, Colorado
The City of Golden is a home rule municipality that is the county seat of Jefferson County, Colorado, United States. Golden lies along Clear Creek at the edge of the foothills of the Front Range of the Rocky Mountains. Founded during the Pike's Peak Gold Rush on 16 June 1859, the mining camp was...
is named after Georgia miner Thomas L. Golden
Thomas L. Golden
Thomas L. Golden was a miner from Georgia, United States, who was one of the earliest prospectors in today's Jefferson County, Colorado. Arriving during the Pike's Peak Gold Rush in 1858, he was partners with another prospector, George Andrew Jackson from Missouri...
. Another Georgia gold miner, John H. Gregory, discovered the first lode gold in Colorado in 1859.

In 1864, four prospectors known as "the Georgians" found one of the early gold placers in Montana
Montana
Montana is a state in the Western United States. The western third of Montana contains numerous mountain ranges. Smaller, "island ranges" are found in the central third of the state, for a total of 77 named ranges of the Rocky Mountains. This geographical fact is reflected in the state's name,...
, at Last Chance Gulch. The site became the state capital of Helena, Montana
Helena, Montana
Helena is the capital city of the U.S. state of Montana and the county seat of Lewis and Clark County. The 2010 census put the population at 28,180. The local daily newspaper is the Independent Record. The Helena Brewers minor league baseball and Helena Bighorns minor league hockey team call the...
.