Frederik, Crown Prince of Denmark, Count of Monpezat, is the heir apparent
Heir apparent
An heir apparent or heiress apparent is a person who is first in line of succession and cannot be displaced from inheriting, except by a change in the rules of succession....
to the throne of Denmark. Frederik is the elder son of Queen Margrethe II
Margrethe II of Denmark
Margrethe II is the Queen regnant of the Kingdom of Denmark. In 1972 she became the first female monarch of Denmark since Margaret I, ruler of the Scandinavian countries in 1375-1412 during the Kalmar Union.-Early life:...
and Henrik, the Prince Consort
Henrik, Prince Consort of Denmark
Henrik, Prince Consort of Denmark , is the husband of the Queen of Denmark, Margrethe II.-Early life:Henrik was born in Talence, Gironde, France...
.

On 14 January 1972 he became Crown Prince of Denmark while his mother succeeded to the throne as Margrethe II.

The Crown Prince attended elementary school at Krebs' Skole during the years 1974–1981, from 1974–1976 as a private pupil at Amalienborg Palace, and from the third form at Krebs' Skole. In the period 1982–1983, the Crown Prince was a boarder at École des Roches in Normandy
Normandy
Normandy is a geographical region corresponding to the former Duchy of Normandy. It is in France.The continental territory covers 30,627 km² and forms the preponderant part of Normandy and roughly 5% of the territory of France. It is divided for administrative purposes into two régions:...
, France. In 1986, Crown Prince Frederik graduated from the upper secondary school of Øregaard Gymnasium
High school
High school is a term used in parts of the English speaking world to describe institutions which provide all or part of secondary education. The term is often incorporated into the name of such institutions....
.

He has completed extensive military studies and training in all three services, notably completing education as a sailor
Sailing
Sailing is the propulsion of a vehicle and the control of its movement with large foils called sails. By changing the rigging, rudder, and sometimes the keel or centre board, a sailor manages the force of the wind on the sails in order to move the boat relative to its surrounding medium and...
in the naval elite special operations forces
Danish Frogman Corps
The Danish Frogman Corps is an elite special forces frogman corps in the Royal Danish Navy.This corps was set up on June 17, 1957 based on the model of the British SBS...
(members of this are known as frogmen or frømænd in Danish). His frogman nickname is "Pingo".

The Crown Prince’s mother tongue is Danish. In addition, Crown Prince Frederik is fluent in French, English and German.

In the Council of State
Danish Council of State
The Council of State is the privy council of Denmark. The body of advisors to the Danish sovereign, the council is a formal institution, with largely ceremonial functions. Chaired by the sovereign, the council comprises all cabinet ministers and the Crown prince or hereditary princess when he or...
on 8 October 2003, Queen Margrethe gave her consent to the marriage of Crown Prince Frederik to Mary Elizabeth Donaldson
Mary, Crown Princess of Denmark
Mary, Crown Princess of Denmark, Countess of Monpezat, is the wife of Frederik, Crown Prince of Denmark...
, an Australian marketing consultant whom the prince met when he was attending the Sydney Olympics in 2000
2000 Summer Olympics
The Sydney 2000 Summer Olympic Games or the Millennium Games/Games of the New Millennium, officially known as the Games of the XXVII Olympiad, were an international multi-sport event which was celebrated between 15 September and 1 October 2000 in Sydney, New South Wales, Australia...
. The wedding took place on 14 May 2004 at Copenhagen Cathedral, Copenhagen.

On 25 April 2005 the Danish royal court announced that Crown Princess Mary was pregnant with the couple's first child, and on 15 October 2005 she gave birth to a Prince. As it is a tradition in the Royal House that kings are named either Frederik or Christian, the baby was baptised Prince Christian Valdemar Henri John
Prince Christian of Denmark
Prince Christian Valdemar Henri John of Denmark, Count of Monpezat , is a member of the Danish Royal Family. He is the elder son of Crown Prince Frederik and his wife, the Australian born Crown Princess Mary. He is a grandson of Queen Margrethe II of Denmark and her husband Prince Henrik...
on 21 January 2006.

On 26 October 2006, the Danish court announced that the Crown Princess was pregnant with her second child. On 21 April 2007, The Crown Princess gave birth to a baby daughter at Copenhagen University Hospital
Rigshospitalet
Rigshospitalet - Copenhagen University Hospital, or simply Riget, is the national hospital of Denmark, located in the capital city of Copenhagen, between the streets of Blegdamsvej, Tagensvej and Nørre Allé...
, the first Danish princess born since 1946. The Crown Prince was at his wife's side the entire time. Their daughter was christened Princess Isabella Henrietta Ingrid Margrethe
Princess Isabella of Denmark
Princess Isabella Henrietta Ingrid Margrethe of Denmark, Countess of Monpezat , is a member of the Danish Royal Family. She is the daughter of Crown Prince Frederik and his wife, the Australian-born Crown Princess Mary....
on 1 July 2007.

Frederik has a special interest in scientific research, climate change and sustainability. The Prince was interviewed by Financial Times
Financial Times
The Financial Times is an international business newspaper. It is a morning daily newspaper published in London and printed in 24 cities around the world. Its primary rival is the Wall Street Journal, published in New York City....
and CNN
CNN
Cable News Network is a U.S. cable news channel founded in 1980 by Ted Turner. Upon its launch, CNN was the first channel to provide 24-hour television news coverage, and the first all-news television channel in the United States...
International, in the Future Cities program, for their commitment to sustainability. He participated in expeditions, forums and events on climate. The prince has represented Denmark as a promoter of sustainable Danish energy. The prince was one of the authors of the Polartokt Kongelig (Polar Cruise Royal), about the challenges of climate, published in 2009 with a preface written by Kofi Annan
Kofi Annan
Kofi Atta Annan is a Ghanaian diplomat who served as the seventh Secretary-General of the UN from 1 January 1997 to 31 December 2006...
. In 2010, wrote the book's foreword Naturen og klimaændringerne i Nordøstgrønland (The nature and climate change in Greenland). Supports scientific research projects, as a patron, as expeditionary, with regular attendance at events and through his foundation, Kronprins Frederiks Fond.

The Prince encourages Danish participation in sports. He is a patron and honorary member of various sports organizations and a member of the International Olympic Committee. He also promotes an active lifestyle in society.

Frederik is an avid sportsman, running marathons in Copenhagen, New York and Paris, and completing the 42 kilometers with a respectable time of 3 hours, 22 minutes and 50 seconds in the Copenhagen Marathon. Frederik is a keen sailor, being a competitive Farr 40 skipper as well as an accomplished Dragon sailor. He won victories and was a leader in the steps championships. He finished in fourth place in the European Championship Dragon Class 2003 (with 51 boats participating), and at number 4 in the Farr 40 Worlds 2008 (with 33 boats participating). He was the first in his class boat in Fyn Cup 2010 in Denmark, and at number 2 in the Dragon DM 2011 (with 25 boats participating). 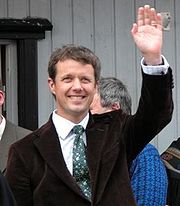 The Crown Prince has announced that his point of focus and reason for joining the International Olympic Committee is to promote an active lifestyle among youth. He is elected for an eight-year period, and made it clear that he would terminate his membership upon ascending the Danish throne.

The Crown Prince couple currently reside at Frederik VIII's Palace, one of the four palaces that make up the Amalienborg Palace
Amalienborg Palace
Amalienborg Palace is the winter home of the Danish royal family, and is located in Copenhagen, Denmark. It consists of four identical classicizing palace façades with rococo interiors around an octagonal courtyard ; in the centre of the square is a monumental equestrian statue of Amalienborg's...
complex. From May 2004 to mid-December 2010, they resided at The Chancellery House, a side building at Fredensborg Palace
Fredensborg Palace
Fredensborg Palace, , is a palace located on the eastern shore of Lake Esrum in Fredensborg on the island of Zealand in Denmark. It is the Danish Royal Family’s spring and autumn residence, and is often the site of important state visits and events in the Royal Family...
.

The Crown Prince receives an allowance or appanage
Appanage
An apanage or appanage or is the grant of an estate, titles, offices, or other things of value to the younger male children of a sovereign, who would otherwise have no inheritance under the system of primogeniture...
set by the Folketing
Folketing
The Folketing , is the national parliament of Denmark. The name literally means "People's thing"—that is, the people's governing assembly. It is located in Christiansborg Palace, on the islet of Slotsholmen in central Copenhagen....
of approximately DKK 14,500,000 or about €1,950,000, of which the Crown Princess is entitled to 10%.

He also has had many years in the Danish Armed Forces and in April 2004, the Crown Prince was appointed commander
Commander
Commander is a naval rank which is also sometimes used as a military title depending on the individual customs of a given military service. Commander is also used as a rank or title in some organizations outside of the armed forces, particularly in police and law enforcement.-Commander as a naval...
, senior grade in the navy, lieutenant colonel
Lieutenant colonel
Lieutenant colonel is a rank of commissioned officer in the armies and most marine forces and some air forces of the world, typically ranking above a major and below a colonel. The rank of lieutenant colonel is often shortened to simply "colonel" in conversation and in unofficial correspondence...
in the army and lieutenant colonel in the air force.

His official title in Danish is Hans Kongelige Højhed Kronprins Frederik til Danmark, Greve af Monpezat.
If he succeeds to the throne and uses his first given name as his regnal name, he would be known as Frederik X.

He has a number of decorations, the most notable of which are: