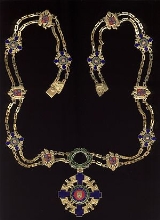 Order of the Star of Romania
Topic Home
Discussion
0
Definition

Encyclopedia
The Order of the Star of Romania (Romanian: Steaua României or Ordinul Naţional "Steaua României" - National Order "Star of Romania") is Romania
Romania
Romania is a country located at the crossroads of Central and Southeastern Europe, on the Lower Danube, within and outside the Carpathian arch, bordering on the Black Sea...
's highest civil order
Order (decoration)
An order or order of merit is a visible honour, awarded by a government, dynastic house or international organization to an individual, usually in recognition of distinguished service to a nation or to humanity. The distinction between orders and decorations is somewhat vague, except that most...
. It is awarded by the President of Romania
President of Romania
The President of Romania is the head of state of Romania. The President is directly elected by a two-round system for a five-year term . An individual may serve two terms...
. It has 6 ranks, from lowest to the highest: Knight (Cavaler), Officer (Ofiţer), Commodore or Commander (Comandor), Grand Officer (Mare Ofiţer), Grand Cross (Mare Cruce) and Sash (Colan).

In 1863 Alexandru Ioan Cuza asked the Romanian representative to Paris
Paris
Paris is the capital and largest city in France, situated on the river Seine, in northern France, at the heart of the Île-de-France region...
to contact a well-known jewellery house, to manufacture a decoration
Military decoration
A military decoration is a decoration given to military personnel or units for heroism in battle or distinguished service. They are designed to be worn on military uniform....
. The Krétly House presented a model, immediately accepted by the domnitor
Domnitor
Domnitor was the official title of the ruler of the United Principalities of Wallachia and Moldavia between 1859 and 1866....
, and based on his agreement, 1,000 pieces of the order would be made. It was established that the award would have five ranks: Knight (Cavaler), Officer (Ofiţer), Comandor (Comandor), Grand Officer (Mare Ofiţer), and Grand Cross (Mare Cruce).

Unlike all the other projects of decorations, realized in the country, or inspired by the French
France
The French Republic , The French Republic , The French Republic , (commonly known as France , is a unitary semi-presidential republic in Western Europe with several overseas territories and islands located on other continents and in the Indian, Pacific, and Atlantic oceans. Metropolitan France...
Légion d'honneur
Légion d'honneur
The Legion of Honour, or in full the National Order of the Legion of Honour is a French order established by Napoleon Bonaparte, First Consul of the Consulat which succeeded to the First Republic, on 19 May 1802...
, or by other orders that had as their insignia a Maltese cross
Maltese cross
The Maltese cross, also known as the Amalfi cross, is identified as the symbol of an order of Christian warriors known as the Knights Hospitaller or Knights of Malta and through them came to be identified with the Mediterranean island of Malta and is one of the National symbols of Malta...
, the model proposed by the Krétly house was a blue cross crosslet (cruce repetată), a design that, at that time, was not used before in decoration design.

Cuza decided that the name of the decoration would be "The Order of the Union" ("Ordinul Unirii"). It was planned to institute it on January 24, 1864, when it would be celebrated the fifth anniversary of his election, moment that marked the Small Union
Danubian Principalities
Danubian Principalities was a conventional name given to the Principalities of Moldavia and Wallachia, which emerged in the early 14th century. The term was coined in the Habsburg Monarchy after the Treaty of Küçük Kaynarca in order to designate an area on the lower Danube with a common...
. Because of this, tha motto of the order was established to fit the event: "GENERE ET CORDES FRATRES" ("BROTHERS THROUGH ORIGINS AND FEELINGS"). The obverse would bear the numbers "5" and "24", the days of January when he was elected in Moldova
Moldova
Moldova , officially the Republic of Moldova is a landlocked state in Eastern Europe, located between Romania to the West and Ukraine to the North, East and South. It declared itself an independent state with the same boundaries as the preceding Moldavian Soviet Socialist Republic in 1991, as part...
and Wallachia
Wallachia
Wallachia or Walachia is a historical and geographical region of Romania. It is situated north of the Danube and south of the Southern Carpathians...
.

Being unable to institute and award the decoration, Cuza gives the insignia as a personal present, not as an actual decoration. Most of the insignia remained stored in the Royal Palace
National Museum of Art of Romania
The National Museum of Art of Romania is located in the former royal palace in Revolution Square, central Bucharest, Romania, completed in 1937...
's dungeons. 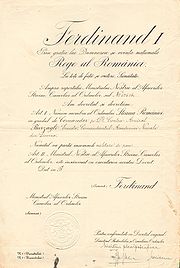 The name "Steaua României" ("The Star of Romania") appeared on May 10, 1887, when the law was voted in the Parliament
Parliament of Romania
The Parliament of Romania is made up of two chambers:*The Chamber of Deputies*The SenatePrior to the modifications of the Constitution in 2003, the two houses had identical attributes. A text of a law had to be approved by both houses...
, as the first law of the Sovereign Romania
Romania
Romania is a country located at the crossroads of Central and Southeastern Europe, on the Lower Danube, within and outside the Carpathian arch, bordering on the Black Sea...
.

By Royal Decree no. 1545/1932, King Carol II
Carol II of Romania
Carol II reigned as King of Romania from 8 June 1930 until 6 September 1940. Eldest son of Ferdinand, King of Romania, and his wife, Queen Marie, a daughter of Prince Alfred, Duke of Edinburgh, the second eldest son of Queen Victoria...
modified the shape and the place of the decoration in the national hierarchy. As a result, in 1932, it dropped from first place (where it had been since 1906) to fourth place (after the Order Carol I and the Order Ferdinand I). In 1937, it dropped to seventh place. The main shape of the order, the blue repeated cross (called also "Romanian cross") was kept, but the rays between the cross' arms were replaced by four heraldic eagles with wings spread, the insignia of King Carol I was placed on the obverse, and the reverse bore the year of its establishment, "1877". Also the number of persons that could be awarded The Star of Romania is increased, as follows:


In 1938, the order was given a superior rank, called "Clasa I" (First Class in English
English language
English is a West Germanic language that arose in the Anglo-Saxon kingdoms of England and spread into what was to become south-east Scotland under the influence of the Anglian medieval kingdom of Northumbria...
), between the Grand Officer rank and the Grand Cross rank, with a maximum of 50 civilians and 15 military personnel.

The rules established by King Carol II were changed by General
General
A general officer is an officer of high military rank, usually in the army, and in some nations, the air force. The term is widely used by many nations of the world, and when a country uses a different term, there is an equivalent title given....
Ion Antonescu
Ion Antonescu
Ion Victor Antonescu was a Romanian soldier, authoritarian politician and convicted war criminal. The Prime Minister and Conducător during most of World War II, he presided over two successive wartime dictatorships...
(who became Conducător
Conducator
Conducător was the title used officially in two instances by Romanian politicians, and earlier by Carol II.-History:...
on September 4, 1940). Generally, the rules were the ones used during World War I
World War I
World War I , which was predominantly called the World War or the Great War from its occurrence until 1939, and the First World War or World War I thereafter, was a major war centred in Europe that began on 28 July 1914 and lasted until 11 November 1918...
. The order "The Star of Romania" became the second in the national hierarchy, after The Order "Michael the Brave".

Inspired by the German
Germany
Germany , officially the Federal Republic of Germany , is a federal parliamentary republic in Europe. The country consists of 16 states while the capital and largest city is Berlin. Germany covers an area of 357,021 km2 and has a largely temperate seasonal climate...
Iron Cross
Iron Cross
The Iron Cross is a cross symbol typically in black with a white or silver outline that originated after 1219 when the Kingdom of Jerusalem granted the Teutonic Order the right to combine the Teutonic Black Cross placed above a silver Cross of Jerusalem....
, Ion Antonescu
Ion Antonescu
Ion Victor Antonescu was a Romanian soldier, authoritarian politician and convicted war criminal. The Prime Minister and Conducător during most of World War II, he presided over two successive wartime dictatorships...
decided that the first three grades of the orders the Star of Romania and the Crown of Romania, with spades (swords), and the ribbon of The Medal "The Military Virtue" would be awarded for exceptionally brave acts with an oak leaf, attached to the ribbon.

After 1948, all the existing decorations were outlawed, and their wearing was forbidden. Just by keeping the insignia one was considered a delinquent in the first years of communism.

After many attempts, in 1998/1999 the National Order "The Star of Romania" was reinstituted, with a design similar to the one used in 1932, but without the insignia of King Carol I
Carol I of Romania
Carol I , born Prince Karl of Hohenzollern-Sigmaringen was reigning prince and then King of Romania from 1866 to 1914. He was elected prince of Romania on 20 April 1866 following the overthrow of Alexandru Ioan Cuza by a palace coup...
, and with the republican insignia.