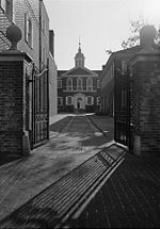 Encyclopedia
The First Continental Congress was a convention of delegates from twelve of the thirteen North America
North America
North America is a continent wholly within the Northern Hemisphere and almost wholly within the Western Hemisphere. It is also considered a northern subcontinent of the Americas...
n colonies that met on September 5, 1774, at Carpenters' Hall
Carpenters' Hall
Carpenters' Hall is a two-story brick building in the Old City neighborhood of Philadelphia, Pennsylvania, that was a key meeting place in the early history of the United States. Completed in 1773 and set back from Chestnut Street, the meeting hall was built for and is still owned by the...
in Philadelphia, Pennsylvania
Pennsylvania
The Commonwealth of Pennsylvania is a U.S. state that is located in the Northeastern and Mid-Atlantic regions of the United States. The state borders Delaware and Maryland to the south, West Virginia to the southwest, Ohio to the west, New York and Ontario, Canada, to the north, and New Jersey to...
, early in the American Revolution
American Revolution
The American Revolution was the political upheaval during the last half of the 18th century in which thirteen colonies in North America joined together to break free from the British Empire, combining to become the United States of America...
. It was called in response to the passage of the Coercive Acts (also known as Intolerable Acts
Intolerable Acts
The Intolerable Acts or the Coercive Acts are names used to describe a series of laws passed by the British Parliament in 1774 relating to Britain's colonies in North America...
by the Colonial Americans) by the British Parliament
Parliament of Great Britain
The Parliament of Great Britain was formed in 1707 following the ratification of the Acts of Union by both the Parliament of England and Parliament of Scotland...
. The Intolerable Acts had punished Boston for the Boston Tea Party
Boston Tea Party
The Boston Tea Party was a direct action by colonists in Boston, a town in the British colony of Massachusetts, against the British government and the monopolistic East India Company that controlled all the tea imported into the colonies...
.

The Congress was attended by 56 members appointed by the legislatures of twelve of the Thirteen Colonies
Thirteen Colonies
The Thirteen Colonies were English and later British colonies established on the Atlantic coast of North America between 1607 and 1733. They declared their independence in the American Revolution and formed the United States of America...
, the exception being the Province of Georgia
Province of Georgia
The Province of Georgia was one of the Southern colonies in British America. It was the last of the thirteen original colonies established by Great Britain in what later became the United States...
, which did not send delegates. At the time, Georgia was considered a convict state and was not taken into consideration in the colonies.

The Congress met briefly to consider options, including an economic boycott
Boycott
A boycott is an act of voluntarily abstaining from using, buying, or dealing with a person, organization, or country as an expression of protest, usually for political reasons...
of British trade; rights and grievances; and petitioning King George III
George III of the United Kingdom
George III was King of Great Britain and King of Ireland from 25 October 1760 until the union of these two countries on 1 January 1801, after which he was King of the United Kingdom of Great Britain and Ireland until his death...
for redress of those grievances.

Patrick Henry
Patrick Henry
Patrick Henry was an orator and politician who led the movement for independence in Virginia in the 1770s. A Founding Father, he served as the first and sixth post-colonial Governor of Virginia from 1776 to 1779 and subsequently, from 1784 to 1786...
already considered the government dissolved, and was seeking a new system. Pennsylvania delegate Joseph Galloway
Joseph Galloway
Joseph Galloway was an American Loyalist during the American Revolution, after serving as delegate to the First Continental Congress from Pennsylvania.-Early life:...
sought reconciliation with Britain. He put forth a "Plan of Union
Galloway's Plan of Union
Galloway's Plan of Union was put forward in the First Continental Congress of 1774. Joseph Galloway was a Pennsylvania delegate who wanted to keep the Thirteen Colonies in the British Empire. He suggested the creation of an American colonial parliament to act together with the Parliament of Great...
", which suggested an American legislative body be formed, with some authority, and whose consent would be required for imperial measures. John Jay
John Jay
John Jay was an American politician, statesman, revolutionary, diplomat, a Founding Father of the United States, and the first Chief Justice of the United States ....
, Edward Rutledge
Edward Rutledge
Edward Rutledge was an American politician and youngest signer of the United States Declaration of Independence. He later served as the 39th Governor of South Carolina.-Early years and career:...
, and other conservatives supported Galloway's plan.(Galloway would later join the Loyalists
Loyalist (American Revolution)
Loyalists were American colonists who remained loyal to the Kingdom of Great Britain during the American Revolutionary War. At the time they were often called Tories, Royalists, or King's Men. They were opposed by the Patriots, those who supported the revolution...
).

The Congress had two primary accomplishments. The first was a compact among the colonies to boycott British goods beginning on December 1, 1774. The West Indies were threatened with a boycott unless the islands agreed to non importation of British goods. Imports from Britain dropped by 97 percent in 1775, compared with the previous year. Committees of observation and inspection were to be formed in each colony for enforcement of the Association. All of the colonial Houses of Assembly approved the proceedings of the congress with the exception of New York and Georgia
Province of New York
The Province of New York was an English and later British crown territory that originally included all of the present U.S. states of New York, New Jersey, Delaware and Vermont, along with inland portions of Connecticut, Massachusetts, and Maine, as well as eastern Pennsylvania...
.

The second accomplishment of the Congress was to provide for a Second Continental Congress
Second Continental Congress
The Second Continental Congress was a convention of delegates from the Thirteen Colonies that started meeting on May 10, 1775, in Philadelphia, Pennsylvania, soon after warfare in the American Revolutionary War had begun. It succeeded the First Continental Congress, which met briefly during 1774,...
to meet on May 10, 1775. In addition to the colonies which had sent delegates to the First Continental Congress, the Congress resolved on October 21, 1774 to send letters of invitation to Quebec
Province of Quebec (1763-1791)
The Province of Quebec was a colony in North America created by Great Britain after the Seven Years' War. Great Britain acquired Canada by the Treaty of Paris when King Louis XV of France and his advisors chose to keep the territory of Guadeloupe for its valuable sugar crops instead of New France...
, Saint John's Island (now Prince Edward Island
Prince Edward Island
Prince Edward Island is a Canadian province consisting of an island of the same name, as well as other islands. The maritime province is the smallest in the nation in both land area and population...
), Nova Scotia
Nova Scotia
Nova Scotia is one of Canada's three Maritime provinces and is the most populous province in Atlantic Canada. The name of the province is Latin for "New Scotland," but "Nova Scotia" is the recognized, English-language name of the province. The provincial capital is Halifax. Nova Scotia is the...
, Georgia
Province of Georgia
The Province of Georgia was one of the Southern colonies in British America. It was the last of the thirteen original colonies established by Great Britain in what later became the United States...
, East Florida
East Florida
East Florida was a colony of Great Britain from 1763–1783 and of Spain from 1783–1822. East Florida was established by the British colonial government in 1763; as its name implies it consisted of the eastern part of the region of Florida, with West Florida comprising the western parts. Its capital...
, and West Florida
West Florida
West Florida was a region on the north shore of the Gulf of Mexico, which underwent several boundary and sovereignty changes during its history. West Florida was first established in 1763 by the British government; as its name suggests it largely consisted of the western portion of the region...
. However, letters appear to have been sent only to Quebec (three letters in all). None of these other colonies sent delegates to the opening of the second Congress, though a delegation from Georgia arrived the following July.