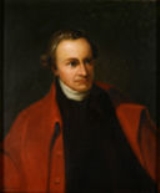 Overview
Patrick Henry was an orator and politician who led the movement for independence in Virginia in the 1770s. A Founding Father
Founding Fathers of the United States
The Founding Fathers of the United States of America were political leaders and statesmen who participated in the American Revolution by signing the United States Declaration of Independence, taking part in the American Revolutionary War, establishing the United States Constitution, or by some...
, he served as the first and sixth post-colonial Governor of Virginia
Governor of Virginia
The governor of Virginia serves as the chief executive of the Commonwealth of Virginia for a four-year term. The position is currently held by Republican Bob McDonnell, who was inaugurated on January 16, 2010, as the 71st governor of Virginia....
from 1776 to 1779 and subsequently, from 1784 to 1786. Henry led the opposition to the Stamp Act of 1765 and is well remembered for his "Give me Liberty, or give me Death!
Give me Liberty, or give me Death!
"Give me Liberty, or Give me Death!" is a quotation attributed to Patrick Henry from a speech he made to the Virginia Convention. It was given on March 23, 1775, at St. John's Church in Richmond, Virginia, and is credited with having swung the balance in convincing the Virginia House of Burgesses...
" speech. Along with Samuel Adams
Samuel Adams
Samuel Adams was an American statesman, political philosopher, and one of the Founding Fathers of the United States. As a politician in colonial Massachusetts, Adams was a leader of the movement that became the American Revolution, and was one of the architects of the principles of American...
and Thomas Paine
Thomas Paine
Thomas "Tom" Paine was an English author, pamphleteer, radical, inventor, intellectual, revolutionary, and one of the Founding Fathers of the United States...
, he is remembered as one of the most influential exponents of Republicanism
Republicanism in the United States
Republicanism is the political value system that has been a major part of American civic thought since the American Revolution. It stresses liberty and inalienable rights as central values, makes the people as a whole sovereign, supports activist government to promote the common good, rejects...
, promoters of the American Revolution and Independence, especially in his denunciations of corruption in government officials and his defense of historic rights.

Why did patrick henry oppose the goverment plan of the philadelphia convention?

what movements did patrick henry do wen he did his speech?

What was his role in the American Revolution?
More

I am not a Virginian, but an American.

Suspicion is a virtue as long as its object is the public good, and as long as it stays within proper bounds. ... Guard with jealous attention the public liberty. Suspect every one who approaches that precious jewel.

Show me that age and country where the rights and liberties of the people were placed on the sole chance of their rulers being good men, without a consequent loss of liberty?

This is all the inheritance I can give my dear family. The religion of Christ can give them one which will make them rich indeed.

Last Will and Testament (20 November 1798), as quoted in Patrick Henry : Life, Correspondences and Speeches (1891) by William Wirt Henry, Vol. H, p. 631; also in America's God and Country : Encyclopedia of Quotations (1996) by William Joseph

United we stand, divided we fall, Let us not split into factions which must destroy that union upon which our existence hangs.

I have but one lamp by which my feet are guided, and that is the lamp of experience. I know no way of judging of the future but by the past.

Compare: "You can never plan the future by the past", Edmund Burke, Letter to a Member of the National Assembly, Vol. iv. p. 55.
More
x