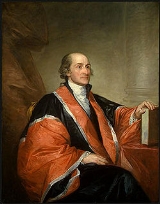 Jay served as the President of the Continental Congress
President of the Continental Congress
The President of the Continental Congress was the presiding officer of the Continental Congress, the convention of delegates that emerged as the first national government of the United States during the American Revolution...
from 1778 to 1779. During and after the American Revolution
American Revolution
The American Revolution was the political upheaval during the last half of the 18th century in which thirteen colonies in North America joined together to break free from the British Empire, combining to become the United States of America...
, Jay was a minister (ambassador) to Spain
United States Ambassador to Spain
-Ambassadors:*John Jay**Appointed: September 29, 1779**Title: Minister Plenipotentiary**Presented credentials:**Terminated mission: ~May 20, 1782*William Carmichael**Appointed: April 20, 1790**Title: Chargé d'Affaires...
and France
United States Ambassador to France
This article is about the United States Ambassador to France. There has been a United States Ambassador to France since the American Revolution. The United States sent its first envoys to France in 1776, towards the end of the four-centuries-old Bourbon dynasty...
, helping to fashion United States foreign policy, and to secure favorable peace terms from Great Britain
Kingdom of Great Britain
The former Kingdom of Great Britain, sometimes described as the 'United Kingdom of Great Britain', That the Two Kingdoms of Scotland and England, shall upon the 1st May next ensuing the date hereof, and forever after, be United into One Kingdom by the Name of GREAT BRITAIN. was a sovereign...
(with Jay's Treaty of 1794) and the First French Republic. Jay also co-wrote the Federalist Papers
Federalist Papers
The Federalist Papers are a series of 85 articles or essays promoting the ratification of the United States Constitution. Seventy-seven of the essays were published serially in The Independent Journal and The New York Packet between October 1787 and August 1788...
, along with Alexander Hamilton
Alexander Hamilton
Alexander Hamilton was a Founding Father, soldier, economist, political philosopher, one of America's first constitutional lawyers and the first United States Secretary of the Treasury...
and James Madison
James Madison
James Madison, Jr. was an American statesman and political theorist. He was the fourth President of the United States and is hailed as the “Father of the Constitution” for being the primary author of the United States Constitution and at first an opponent of, and then a key author of the United...
.

As a leader of the new Federalist Party
Federalist Party (United States)
The Federalist Party was the first American political party, from the early 1790s to 1816, the era of the First Party System, with remnants lasting into the 1820s. The Federalists controlled the federal government until 1801...
, Jay was the Governor of New York State from 1795 to 1801, and he became the state's leading opponent of slavery
Slavery
Slavery is a system under which people are treated as property to be bought and sold, and are forced to work. Slaves can be held against their will from the time of their capture, purchase or birth, and deprived of the right to leave, to refuse to work, or to demand compensation...
.

What was his wifes name? How many babies did they have ? How many children lived to adulthood? Where were their letters kept? Please quote the prayer...
More

What role did he play in the American Revolution?

Political career after the Revolution

What did the Jay Treaty of 1795 establish?