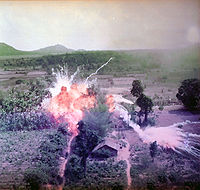 Firebombing is a bomb
Bomb
A bomb is any of a range of explosive weapons that only rely on the exothermic reaction of an explosive material to provide an extremely sudden and violent release of energy...
ing technique designed to damage a target, generally an urban area, through the use of fire
Fire
Fire is the rapid oxidation of a material in the chemical process of combustion, releasing heat, light, and various reaction products. Slower oxidative processes like rusting or digestion are not included by this definition....
, caused by incendiary device
Incendiary device
Incendiary weapons, incendiary devices or incendiary bombs are bombs designed to start fires or destroy sensitive equipment using materials such as napalm, thermite, chlorine trifluoride, or white phosphorus....
s, rather than from the blast effect of large bombs.

Although simple incendiary bombs have been used to destroy buildings since the start of gunpowder warfare, World War II
World War II
World War II, or the Second World War , was a global conflict lasting from 1939 to 1945, involving most of the world's nations—including all of the great powers—eventually forming two opposing military alliances: the Allies and the Axis...
saw the first use of strategic bombing
Strategic bombing
Strategic bombing is a military strategy used in a total war with the goal of defeating an enemy nation-state by destroying its economic ability and public will to wage war rather than destroying its land or naval forces...
from the air to destroy the ability of the enemy to wage war. London, Coventry
Coventry Blitz
The Coventry blitz was a series of bombing raids that took place in the English city of Coventry. The city was bombed many times during the Second World War by the German Air Force...
and many other British cities were firebombed during the Blitz
The Blitz
The Blitz was the sustained strategic bombing of Britain by Nazi Germany between 7 September 1940 and 10 May 1941, during the Second World War. The city of London was bombed by the Luftwaffe for 76 consecutive nights and many towns and cities across the country followed...
. Most large German cities were extensively firebombed starting in 1942 and almost all large Japanese cities were firebombed during the last six months of World War II.

This technique makes use of small incendiary bombs (possibly delivered by a cluster bomb
Cluster bomb
A cluster munition is a form of air-dropped or ground-launched explosive weapon that releases or ejects smaller sub-munitions. Commonly, this is a cluster bomb that ejects explosive bomblets that are designed to kill enemy personnel and destroy vehicles...
such as the Molotov bread basket
Molotov bread basket
The RRAB-3, nicknamed the Molotov bread basket , was a Soviet-made droppable bomb dispenser that combined a large high-explosive charge with a cluster of incendiary bombs. It was used against the cities of Finland during the Winter War of 1939–1940...
). If a fire catches, it could spread, taking in adjacent buildings that would have been largely unaffected by a high explosive bomb. This is a more effective use of the payload that a bomber could carry.

The use of incendiaries alone does not generally start uncontrollable fires where the targets are roofed with nonflammable materials such as tiles or slates. The use of a mixture of bombers carrying high explosive bombs, such as the British blockbuster bomb
Blockbuster bomb
Blockbuster or "cookie" was the name given to several of the largest conventional bombs used in World War II by the Royal Air Force...
s, which blew out windows and roofs and exposed the interior of buildings to the incendiary bombs, are much more effective. Alternatively, a preliminary bombing with conventional bombs can be followed by subsequent attacks by incendiary carrying bombers. 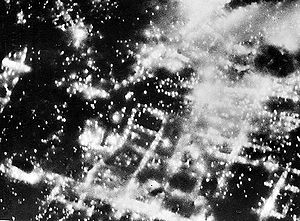 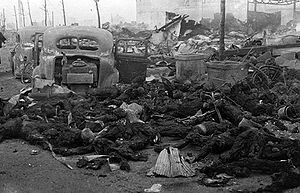 The United States Army Air Force (USAAF) officially only bombed precision targets over Europe, but for example, when 316 B-17 Flying Fortresses bombed Dresden
Dresden
Dresden is the capital city of the Free State of Saxony in Germany. It is situated in a valley on the River Elbe, near the Czech border. The Dresden conurbation is part of the Saxon Triangle metropolitan area....
in a follow-up raid at around noon on the 14 February 1945, because of cloud the later waves bombed using H2X radar
H2X radar
H2X radar was an American development of the British H2S radar, the first ground mapping radar to be used in combat. It was used by the USAAF during World War II as a navigation system for daylight overcast and nighttime operations...
for targeting. The mix of bombs to be used on the Dresden raid was about 40% incendiaries, much closer to the RAF city-busting mix than the bomb
Bomb
A bomb is any of a range of explosive weapons that only rely on the exothermic reaction of an explosive material to provide an extremely sudden and violent release of energy...
-load usually used by the Americans in precision bombardments. This was quite a common mix when the USAAF anticipated cloudy conditions over the target.

In its attacks on Japan the USAAF abandoned its policy of precision bombing, and used a mix of incendiaries and high explosives to burn Japanese cities to the ground. These tactics were used to devastating effect with many urban areas burned out. The first raid using low-flying B-29 Superfortress
B-29 Superfortress
The B-29 Superfortress is a four-engine propeller-driven heavy bomber designed by Boeing that was flown primarily by the United States Air Forces in late-World War II and through the Korean War. The B-29 was one of the largest aircraft to see service during World War II...
bombers carrying incendiary bombs to drop on Tokyo
Tokyo
, ; officially , is one of the 47 prefectures of Japan. Tokyo is the capital of Japan, the center of the Greater Tokyo Area, and the largest metropolitan area of Japan. It is the seat of the Japanese government and the Imperial Palace, and the home of the Japanese Imperial Family...
was on the night of 24/25 February 1945 when 174 B-29s destroyed around fifty square mile (150 km²) of the city. Changing their tactics to expand the coverage and increase the damage, 279 B-29s raided on the night of 9/10 March, dropping around 1,700 tons of bombs. Approximately 16 square miles (41 km²) of the city were destroyed and some 100,000 people are estimated to have died in the resulting firestorm
Firestorm
A firestorm is a conflagration which attains such intensity that it creates and sustains its own wind system. It is most commonly a natural phenomenon, created during some of the largest bushfires, forest fires, and wildfires...
, more than the immediate deaths of either the Hiroshima
Hiroshima
is the capital of Hiroshima Prefecture, and the largest city in the Chūgoku region of western Honshu, the largest island of Japan. It became best known as the first city in history to be destroyed by a nuclear weapon when the United States Army Air Forces dropped an atomic bomb on it at 8:15 A.M...
or Nagasaki, Japan atomic bombings.