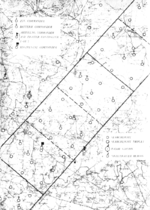 The first version of the Line consisted of a series of radar stations with overlapping coverage, layered three deep from Denmark to the middle of France, each covering a zone about 32 km long (north-south) and 20 km wide (east-west). Each control centre was known as a Himmelbett zone, consisting of a Freya radar
Freya radar
Freya was an early warning radar deployed by Germany during World War II, named after the Norse Goddess Freyja. During the war over a thousand stations were built. A naval version operating on a slightly different wavelength was also developed as Seetakt...
with a range of about 100 km, a "master searchlight" directed by the radar, and a number of manually directed searchlights spread through the cell. Each cell was also assigned one primary and one backup night fighter. The fighter used was usually a Dornier Do 17
Dornier Do 17
The Dornier Do 17, sometimes referred to as the Fliegender Bleistift , was a World War II German light bomber produced by Claudius Dornier's company, Dornier Flugzeugwerke...
, Junkers Ju 88
Junkers Ju 88
The Junkers Ju 88 was a World War II German Luftwaffe twin-engine, multi-role aircraft. Designed by Hugo Junkers' company through the services of two American aviation engineers in the mid-1930s, it suffered from a number of technical problems during the later stages of its development and early...
or Messerschmitt Bf 110
Messerschmitt Bf 110
The Messerschmitt Bf 110, often called Me 110, was a twin-engine heavy fighter in the service of the Luftwaffe during World War II. Hermann Göring was a proponent of the Bf 110, and nicknamed it his Eisenseiten...
. This technique of Ground-controlled interception
Ground-controlled interception
Ground-controlled interception an air defense tactic whereby one or more radar stations are linked to a command communications centre which guides interceptor aircraft to an airborne target. This tactic was pioneered during World War II by the Royal Air Force with the Luftwaffe to follow closely...
(GCI) was preceded by the use of single-engined non-radar equipped BF 109
Messerschmitt Bf 109
The Messerschmitt Bf 109, often called Me 109, was a German World War II fighter aircraft designed by Willy Messerschmitt and Robert Lusser during the early to mid 1930s...
s guided-onto the attacking bombers by the illumination of searchlight
Searchlight
A searchlight is an apparatus that combines a bright light source with some form of curved reflector or other optics to project a powerful beam of light of approximately parallel rays in a particular direction, usually constructed so that it can be swiveled about.-Military use:The Royal Navy used...
s, termed; Helle Nachtjagd - illuminated night fighting.

RAF bombers flying into Germany or France had to cross the line at some point, at which time the Freya radar operators directed the master searchlight to illuminate the plane. Once this had happened other manually-controlled searchlights also picked up the plane, and the night fighters were directed to intercept the illuminated bomber. Demands by the Bürgermeister
Mayor
In many countries, a Mayor is the highest ranking officer in the municipal government of a town or a large urban city....
s in Germany led to the recall of the searchlights to the major cities which undermined this system.

Later versions of the Himmelbett added two Würzburg radar
Würzburg radar
The Würzburg radar was the primary ground-based gun laying radar for both the Luftwaffe and the German Army during World War II. Initial development took place before the war, entering service in 1940. Eventually over 4,000 Würzburgs of various models were produced...
s, with a range of about 30 km. Unlike the early-warning Freya, Würzburg's were accurate (and complex) tracking radars. One was locked onto the night fighter as soon as it entered the cell and as soon as the Freya picked up a target the second Würzburg locked onto it. All position reports were sent to the Himmelbett control centre thereby allowing controllers in the Himmelbett centre to get continual readings of the positions of both planes.

A Jägerleitoffizier directed the German night-fighter to a visual interception with the RAF bomber using radio. Operations were manually coordinated using an "Auswertetisch" (the precursor of a "Seeburg" table).To aid interception a number of the night fighters were fitted with a short-range infrared
Infrared
Infrared light is electromagnetic radiation with a wavelength longer than that of visible light, measured from the nominal edge of visible red light at 0.74 micrometres , and extending conventionally to 300 µm...
device known as Spanner but these proved almost useless. Later the short-range Lichtenstein radar
Lichtenstein radar
Lichtenstein radar was a German airborne radar in use during World War II. It was available in at least four major revisions, the FuG 202 Lichtenstein B/C, FuG 212 Lichtenstein C-1, FuG 220 Lichtenstein SN-2 and FuG 228 Lichtenstein SN-3.- FuG 202 Lichtenstein B/C :Early FuG 202 Lichtenstein B/C...
was added to the aircraft, allowing them to detect aircraft once the operators had directed them into the area, making searchlights largely redundant. The battle stations were known as "Kammhuber's opera houses" and procedures developed in 1942 were used until the end of the war.

British intelligence soon discovered the nature of the Kammhuber Line and started studying ways to defeat it. At the time RAF Bomber Command
RAF Bomber Command
RAF Bomber Command controlled the RAF's bomber forces from 1936 to 1968. During World War II the command destroyed a significant proportion of Nazi Germany's industries and many German cities, and in the 1960s stood at the peak of its postwar military power with the V bombers and a supplemental...
sent in their planes one at a time to force the defenses to be spread as far apart as possible, meaning that any one aircraft had to deal with little concentrated flak. This also meant the Himmelbett centres were only dealing with perhaps one or two planes at a time, making their job much easier.

At the urging of R.V. Jones
Reginald Victor Jones
Reginald Victor Jones, CH CB CBE FRS, was a British physicist and scientific military intelligence expert who played an important role in the defence of Britain in -Education:...
, Bomber Command reorganized their attacks into streams of bombers - the so-called Bomber stream
Bomber stream
The bomber stream was a tactic developed by the Royal Air Force Bomber Command to overwhelm the German aerial defences of the Kammhuber Line during World War II....
, carefully positioned so the stream flew down the middle of a single cell. Data provided to the British scientists allowed them to calculate that the bomber stream would overwhelm the six potential interceptions per hour that the German "Tame Boar" (Zahme Sau
Zahme Sau
Zahme Sau was a night fighter intercept tactic introduced by the German Luftwaffe in 1943. At the indication of a forthcoming raid, the fighters were be scrambled and collected together to orbit one of several radio beacons throughout Germany, ready to be directed en masse into the bomber stream...
) night fighters could manage in a Himmelbett zone. It was then a matter of calculating the statistical loss from collisions against the statistical loss from night fighters to calculate how close the bombers should fly to minimise RAF losses. The introduction of Gee
GEE (navigation)
Gee was the code name given to a radio navigation system used by the Royal Air Force during World War II.Different sources record the name as GEE or Gee. The naming supposedly comes from "Grid", so the lower case form is more correct, and is the form used in Drippy's publications. See Drippy 1946....
radio navigation in 1942 allowed the RAF bombers to fly by a common route and at the same speed to and from the target, each aircraft being allotted a height band and a time slot in a bomber stream to minimize the risk of collision. The first use of the bomber stream was the first 1,000 bomber raid against Cologne on the night of 30/31 May 1942. This tactic was extremely effective, leading to fighting between Kammhuber and Erhard Milch
Erhard Milch
Erhard Milch was a German Field Marshal who oversaw the development of the Luftwaffe as part of the re-armament of Germany following World War I, and served as founding Director of Deutsche Luft Hansa...
, his boss.

Although the success rate of the Line dropped, the network of radars and plotting stations continued to prove their worth. Now when a raid started, night fighters from any base within range were directed into the stream, where it was hoped they would be able to find aircraft with their radar. At the same time a massive building program started to add hundreds of Würzburgs to the system, although the infrastructure needed was extensive. The boxes were initially the radius of the Würzburg radars, about 22 miles but more powerful radar later on made the boxes up to 100 miles across. Eventually, the line of boxes was several deep, especially around larger towns and the Ruhr valley. Once again the system started to score increasing successes against the British raids.

The British were ready for this development and as soon as the rates started to improve - for the Germans - they introduced "Window
Chaff (radar countermeasure)
Chaff, originally called Window by the British, and Düppel by the Second World War era German Luftwaffe , is a radar countermeasure in which aircraft or other targets spread a cloud of small, thin pieces of aluminium, metallized glass fibre or plastic, which either appears as a cluster of secondary...
". Droppping strips of foil from a number of "lead" bombers, the German radar operators saw what appeared to be a stream entering their box, each packet of chaff appearing to be a bomber on their displays. Night fighters were then sent to attack this stream, only to find empty space. Just as the fighters reached the false stream, the "real" stream appeared hundreds of miles away, too far to be attacked. The first time this was used was during Operation Gomorrah (a week-long bombing campaign against Hamburg
Hamburg
-History:The first historic name for the city was, according to Claudius Ptolemy's reports, Treva.But the city takes its modern name, Hamburg, from the first permanent building on the site, a castle whose construction was ordered by the Emperor Charlemagne in AD 808...
) and proved spectacularly effective. The German radar operators eventually learned to spot the lead bombers at the edge of the windowing, making it less effective. The British had held back from introducing Window for over a year lest the technique be adopted by the Germans and used against British cities.

A more sophisticated method for blinding the German radar was "Mandrel", a jamming signal broadcast from aircraft accompanying the bomber stream or later certain bombers themselves. This progressed into jamming techniques against individual German radar types and spoofing radars to see bomber streams that weren't there.
The British also attacked the communications between ground stations and fighters broadcasting false directions in authentic accents over the radio.

One other element was long range nightfighters operating against the German nightfighters, using a system called "Serrate" to home in on the German nightfighter radar signals. At least three squadrons equipped with Bristol Beaufighter
Bristol Beaufighter
The Bristol Type 156 Beaufighter, often referred to as simply the Beau, was a British long-range heavy fighter modification of the Bristol Aeroplane Company's earlier Beaufort torpedo bomber design...
and de Havilland Mosquito
De Havilland Mosquito
The de Havilland DH.98 Mosquito was a British multi-role combat aircraft that served during the Second World War and the postwar era. It was known affectionately as the "Mossie" to its crews and was also nicknamed "The Wooden Wonder"...
were part of No. 100 Group RAF
No. 100 Group RAF
No. 100 Group was a special duties group within RAF Bomber Command.It was formed on 11 November 1943 to consolidate the increasingly complex business of electronic warfare and countermeasures within one organisation. The group was responsible for the development, operational trial and use of...
supporting Bomber Command with electronic countermeasures.