Encyclopedia
Military tactics, the science and art of organizing an army
Army
An army An army An army (from Latin arma "arms, weapons" via Old French armée, "armed" (feminine), in the broadest sense, is the land-based military of a nation or state. It may also include other branches of the military such as the air force via means of aviation corps...
or an air force, are the techniques for using weapons or military units in combination for engaging and defeating an enemy in battle
Battle
Generally, a battle is a conceptual component in the hierarchy of combat in warfare between two or more armed forces, or combatants. In a battle, each combatant will seek to defeat the others, with defeat determined by the conditions of a military campaign...
. Changes in philosophy and technology over time have been reflected in changes to military tactics. In current military thought, tactics are the lowest of three planning levels. The highest tier of planning is the strategy
Military strategy
Military strategy is a set of ideas implemented by military organizations to pursue desired strategic goals. Derived from the Greek strategos, strategy when it appeared in use during the 18th century, was seen in its narrow sense as the "art of the general", 'the art of arrangement' of troops...
, which is about how force is translated into political objectives, or more specifically how you bridge the means and ends of war together. An intermediate level, which converts strategy into tactics is the operational level
Operational warfare
Operational mobility, beginning as a military theory concept during the period of mechanisation of armed forces, became a method of managing movement of forces by strategic commanders from the staging area to their Tactical Area of Responsibility....
that deals with formations of units. In common vernacular, "tactical" decisions are those made to achieve greatest immediate value and "strategic" decisions are those made to achieve the greatest overall value irrespective of immediate return. 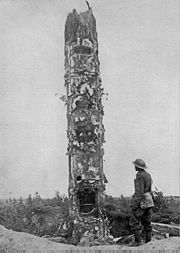 Military tactics are at once both a science and an art. There are basic principles which — if followed — at least lend competency, 'battle drills' which try to promote automatic responses to given situations, and dozens of guides and instructions that have been written over the centuries. Some practices have not changed since the dawn of warfare: ambushes, seeking and turning flanks, maintaining reconnaissance, creating and using obstacles and defences, etc. Using ground to best advantage has not changed much either. Heights, rivers, swamps, passes, choke points, and natural cover
Cover (military)
In military combat, the concept of cover refers to anything which is capable of physically protecting an individual from enemy fire. This differentiates it from the similar concept of concealment, in that an object or area of concealment only affords the benefit of stealth, not actual protection...
, can all be used in multiple ways. Before the nineteenth century, many military tactics were confined to battle
Battle
Generally, a battle is a conceptual component in the hierarchy of combat in warfare between two or more armed forces, or combatants. In a battle, each combatant will seek to defeat the others, with defeat determined by the conditions of a military campaign...
field concerns: how to maneuver units during combat in open terrain. Nowadays, specialized tactics exist for many situations, for example for securing a room in a building.

What does change constantly is the technological dimension, as well as the sociology of combatants. One might wish to reflect on the differences in the technology and society that produced such different types of soldier or warrior as the Roman Legionary
Legionary
The Roman legionary was a professional soldier of the Roman army after the Marian reforms of 107 BC. Legionaries had to be Roman citizens under the age of 45. They enlisted in a legion for twenty-five years of service, a change from the early practice of enlisting only for a campaign...
, the Medieval Knight
Knight
A knight was a member of a class of lower nobility in the High Middle Ages.By the Late Middle Ages, the rank had become associated with the ideals of chivalry, a code of conduct for the perfect courtly Christian warrior....
, the Turk-Mongol Horse Archer, the Chinese Crossbowman, the British Redcoat
Red coat (British army)
Red coat or Redcoat is a historical term used to refer to soldiers of the British Army because of the red uniforms formerly worn by the majority of regiments. From the late 17th century to the early 20th century, the uniform of most British soldiers, , included a madder red coat or coatee...
, or an Air Cavalry trooper. Each, constrained by his weaponry, logistics
Logistics
Logistics is the management of the flow of goods between the point of origin and the point of destination in order to meet the requirements of customers or corporations. Logistics involves the integration of information, transportation, inventory, warehousing, material handling, and packaging, and...
and his social conditioning
Social conditioning
Social conditioning refers to the sociological process of training individuals in a society to act or respond in a manner generally approved by the society in general and peer groups within society. The concept is stronger than that of socialization, which refers to the process of inheriting norms,...
, would use a battlefield differently, but would usually seek the same outcomes from their use of tactics.