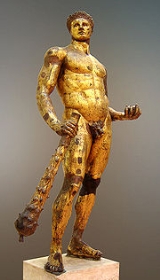 Overview
Hercules is the Roman name for Greek demigod
Demigod
The term "demigod" , meaning "half-god", is commonly used to describe mythological figures whose one parent was a god and whose other parent was human; as such, demigods are human-god hybrids...
Heracles
Heracles
Heracles ,born Alcaeus or Alcides , was a divine hero in Greek mythology, the son of Zeus and Alcmene, foster son of Amphitryon and great-grandson of Perseus...
, son of Zeus
Zeus
In the ancient Greek religion, Zeus was the "Father of Gods and men" who ruled the Olympians of Mount Olympus as a father ruled the family. He was the god of sky and thunder in Greek mythology. His Roman counterpart is Jupiter and his Etruscan counterpart is Tinia.Zeus was the child of Cronus...
(the Greek equivalent of the Roman god Jupiter
Jupiter (mythology)
In ancient Roman religion and myth, Jupiter or Jove is the king of the gods, and the god of the sky and thunder. He is the equivalent of Zeus in the Greek pantheon....
), and the mortal Alcmene
Alcmene
In Greek mythology, Alcmene or Alcmena was the mother of Heracles.-Background:Alcmene was born to Electryon, the son of Perseus and Andromeda, and king of Tiryns and Mycenae or Medea in Argolis. Her mother was Anaxo, daughter of Alcaeus and Astydamia, daughter of Pelops and Hippodameia...
. Early Roman sources suggest that the imported Greek hero supplanted a mythic Italic shepherd called "Recaranus" or "Garanus", famous for his strength who dedicated the Ara Maxima
Great Altar of Hercules
The Great Altar of Unconquered Hercules stood in the Forum Boarium of ancient Rome. It was the earliest cult-centre of Hercules in Rome, predating the circular Temple of Hercules Victor. The altar stood until it was demolished by order of Pope Sixtus IV...
that became associated with the earliest Roman cult of Hercules. While adopting much of the Greek Heracles' iconography and mythology as his own, Hercules adopted a number of myths and characteristics that were distinctly Roman.

The Walt Disney movie " Hercules " and the actually facts of the Legend, What did the movie do incorrectly to the feel facts of the legend?
More

What acts of heroism did he do?

What was his weapon of choice?

What was his fashion sense during the times?

Is Hercules Greek or Roman?

Who were Zeus's parents?
More

Wow. What a day. First that restaurant by the bay. And then that, that play, that, that, that Oedipus thing. Man! I thought I had problems.

But, Father, I've defeated every single monster I've come up against. I-I'm... I'm the most famous person in all of Greece. I'm... I-I'm an action figure!

[about Hercules] He comes on with his big, innocent farm boy routine, but I could see through that in a Peloponnesian minute.

Thanks for everything, Herc. It's been a real slice.

[while Hercules stutters for an answer] Are you always this articulate?

I'm a big tough girl. I tie my own sandals and everything.

Megara. My friends call me Meg. At least they would if I had any friends. So did they give you a name along with all those rippling pectorals?