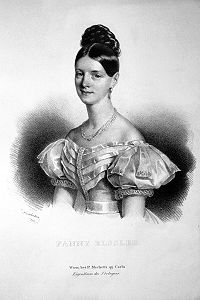 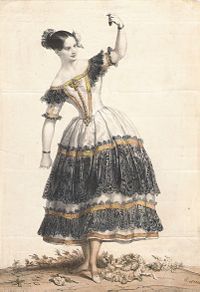 Fanny Elssler born Franziska Elßler, was an Austria
Austria
Austria , officially the Republic of Austria , is a landlocked country of roughly 8.4 million people in Central Europe. It is bordered by the Czech Republic and Germany to the north, Slovakia and Hungary to the east, Slovenia and Italy to the south, and Switzerland and Liechtenstein to the...
n ballerina of the 'Romantic Period'.

Daughter of Johann Florian Elssler, a second generation employee of Prince Esterhazy
Esterházy
The House of Esterházy was a Hungarian noble family in Hungary beginning in the Middle Ages. From the 17th century they were among the great landowner magnates of the Kingdom of Hungary, during the time it was part of the Habsburg Empire and later Austria-Hungary.-History:The Esterházys arose...
in Eisenstadt
Eisenstadt
- Politics :The current mayor of Eisenstadt is Andrea Fraunschiel ÖVP.The district council is composed as follows :* ÖVP: 17 seats* SPÖ: 8 seats* Austrian Green Party: 2 seats* FPÖ: 2 seats- Castles and palaces :...
. Both Johann and his brother Josef were employed as copyists to the Prince's Kapellmeister
Kapellmeister
Kapellmeister is a German word designating a person in charge of music-making. The word is a compound, consisting of the roots Kapelle and Meister . The words Kapelle and Meister derive from the Latin: capella and magister...
, Joseph Haydn
Joseph Haydn
Franz Joseph Haydn , known as Joseph Haydn , was an Austrian composer, one of the most prolific and prominent composers of the Classical period. He is often called the "Father of the Symphony" and "Father of the String Quartet" because of his important contributions to these forms...
. Johann was to eventually become valet to Haydn and attended Haydn up to and was present at Haydn's death.

Their success there, to which Fanny contributed more largely than her sister, led to an engagement in Berlin
Berlin
Berlin is the capital city of Germany and is one of the 16 states of Germany. With a population of 3.45 million people, Berlin is Germany's largest city. It is the second most populous city proper and the seventh most populous urban area in the European Union...
in 1830. This was the beginning of a series of triumphs for Fanny's personal beauty and skill in dancing. After captivating all hearts in Berlin and Vienna, and inspiring the aged statesman Friedrich von Gentz
Friedrich von Gentz
Friedrich von Gentz was a German publicist and statesman.-Early years:Gentz was born at Breslau.His father was an official, his mother distantly related to the Prussian minister Friedrich Ancillon...
with a remarkable passion, she paid a visit to London
London
London is the capital city of :England and the :United Kingdom, the largest metropolitan area in the United Kingdom, and the largest urban zone in the European Union by most measures. Located on the River Thames, London has been a major settlement for two millennia, its history going back to its...
, where she received much kindness at the hands of Mr. and Mrs. Grote, who practically adopted the little girl who was born three months after the mother's arrival in England
England
England is a country that is part of the United Kingdom. It shares land borders with Scotland to the north and Wales to the west; the Irish Sea is to the north west, the Celtic Sea to the south west, with the North Sea to the east and the English Channel to the south separating it from continental...
.

In September 1834 Elssler appeared with the Ballet du Théâtre de l'Académie Royale de Musique (today known as the Paris Opera Ballet
Paris Opera Ballet
The Paris Opera Ballet is the oldest national ballet company in the world, and many European and international ballet companies can trace their origins to it...
), a step to which she looked forward with much misgiving on account of Marie Taglioni
Marie Taglioni
Marie Taglioni was a famous Italian/Swedish ballerina of the Romantic ballet era, a central figure in the history of European dance.-Biography:...
's supremacy on that stage. The result, however, was another triumph for her, and the temporary eclipse of Taglioni, who, although the finer artist of the two, could not for the moment compete with the newcomer's personal fascination. This earned Elssler a place among the most talented and notable ballerina
Ballerina
A ballerina is a title used to describe a principal female professional ballet dancer in a large company; the male equivalent to this title is danseur or ballerino...
s of the Romantic ballet
Romantic ballet
The Romantic ballet is defined primarily by an era in ballet in which the ideas of Romanticism in art and literature influenced the creation of ballets. The era occurred during the early to mid 19th century primarily at the Théâtre de l'Académie Royale de Musique of the Paris Opera Ballet and Her...
period.

It was conspicuously in her performance of the Spanish La Cachucha (from the 1836 Coralli
Jean Coralli
Jean Coralli , born Jean Coralli Peracini, was a French dancer and choreographer and later held the esteemed post of First Balletmaster of the Paris Opera Ballet...
/Gide ballet ) that Elssler outshone all rivals. In 1840 she sailed with her sister for New York
New York
New York is a state in the Northeastern region of the United States. It is the nation's third most populous state. New York is bordered by New Jersey and Pennsylvania to the south, and by Connecticut, Massachusetts and Vermont to the east...
for a tour arranged by Henry Wikoff
Henry Wikoff
Henry Wikoff was an American traveller and writer.Wikoff was born about 1811, the illegitimate son of a doctor and inherited a sizeable fortune, which enabled him to travel extensively in Europe...
, and after two years unmixed success they returned to Europe
Europe
Europe is, by convention, one of the world's seven continents. Comprising the westernmost peninsula of Eurasia, Europe is generally 'divided' from Asia to its east by the watershed divides of the Ural and Caucasus Mountains, the Ural River, the Caspian and Black Seas, and the waterways connecting...
. While in New York City
New York City
New York is the most populous city in the United States and the center of the New York Metropolitan Area, one of the most populous metropolitan areas in the world. New York exerts a significant impact upon global commerce, finance, media, art, fashion, research, technology, education, and...
, Fanny dined with and was escorted by John Van Buren
John Van Buren
John Van Buren was an American lawyer and politician.-Life:He was the second son of President Martin Van Buren and graduated from Yale College in 1828. In 1831, when his father was appointed U.S. Minister to Britain, he accompanied him as secretary of the American Legation in London...
, son of the President of the United States, Martin Van Buren
Martin Van Buren
Martin Van Buren was the eighth President of the United States . Before his presidency, he was the eighth Vice President and the tenth Secretary of State, under Andrew Jackson ....
. During the following five years Fanny appeared in Germany
Germany
Germany , officially the Federal Republic of Germany , is a federal parliamentary republic in Europe. The country consists of 16 states while the capital and largest city is Berlin. Germany covers an area of 357,021 km2 and has a largely temperate seasonal climate...
, Austria
Austria
Austria , officially the Republic of Austria , is a landlocked country of roughly 8.4 million people in Central Europe. It is bordered by the Czech Republic and Germany to the north, Slovakia and Hungary to the east, Slovenia and Italy to the south, and Switzerland and Liechtenstein to the...
, France
France
The French Republic , The French Republic , The French Republic , (commonly known as France , is a unitary semi-presidential republic in Western Europe with several overseas territories and islands located on other continents and in the Indian, Pacific, and Atlantic oceans. Metropolitan France...
, England, and Russia
Russia
Russia or , officially known as both Russia and the Russian Federation , is a country in northern Eurasia. It is a federal semi-presidential republic, comprising 83 federal subjects...
. In 1845, she refused to perform along with her rivals Marie Taglioni, Carlotta Grisi
Carlotta Grisi
Carlotta Grisi, real name Caronne Adele Josephine Marie Grisi was an Italian ballet dancer born in Visinada, Istria . She was trained at the ballet school of Teatro alla Scala in Milan and later with dancer/balletmaster Jules Perrot...
, Fanny Cerrito
Fanny Cerrito
Fanny Cerrito, originally Francesca Cerrito , was an Italian ballet dancer and choreographer.Born in Naples, she studied under Carlo Blasis and the French choreographers Jules Perrot and Arthur Saint-Léon, to the latter of whom she was married from 1845–1851. Notable roles included Ondine and a...
, and Lucile Grahn
Lucile Grahn
Lucile Alexia Grahn was the first internationally renowned Danish ballerina and one of the popular dancers of the Romantic ballet era....
in Jules Perrot
Jules Perrot
Jules-Joseph Perrot was a dancer and choreographer who later became Balletmaster of the Imperial Ballet in St. Petersburg, Russia...
's Pas de Quatre
Pas de Quatre
Pas de Quatre is a ballet divertissement choreographed by Jules Perrot in 1845, on the suggestion of Benjamin Lumley, Director at His Majestys Theatre to music composed by Cesare Pugni....
in London. In the same year, having amassed a fortune, she retired from the stage and settled near Hamburg
Hamburg
-History:The first historic name for the city was, according to Claudius Ptolemy's reports, Treva.But the city takes its modern name, Hamburg, from the first permanent building on the site, a castle whose construction was ordered by the Emperor Charlemagne in AD 808...
. A few years later her sister Theresa contracted a morganatic marriage with Prince Adalbert of Prussia
Adalbert of Prussia
Prince Adalbert of Prussia was a son of Prince Wilhelm of Prussia and Landgravine Marie Anna of Hesse-Homburg. He was a naval theorist and admiral. He was instrumental during the Revolutions of 1848 in founding the first unified German fleet, the Reichsflotte...
, and was ennobled under the title of Baroness von Barnim. Fanny Elssler died in Vienna on 27 November 1884. Theresa was left a widow in 1873, and died on 19 November 1878.