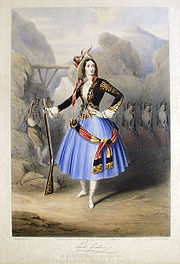 Lucile Alexia Grahn was the first internationally renowned Danish ballerina
Ballerina
A ballerina is a title used to describe a principal female professional ballet dancer in a large company; the male equivalent to this title is danseur or ballerino...
and one of the popular dancers of the Romantic ballet
Romantic ballet
The Romantic ballet is defined primarily by an era in ballet in which the ideas of Romanticism in art and literature influenced the creation of ballets. The era occurred during the early to mid 19th century primarily at the Théâtre de l'Académie Royale de Musique of the Paris Opera Ballet and Her...
era.

Grahn studied from a young age at the Royal Danish Theatre School
Royal Danish Theatre
The Royal Danish Theatre is both the national Danish performing arts institution and a name used to refer to its old purpose-built venue from 1874 located on Kongens Nytorv in Copenhagen. The theatre was founded in 1748, first serving as the theatre of the king, and then as the theatre of the...
in Copenhagen
Copenhagen
Copenhagen is the capital and largest city of Denmark, with an urban population of 1,199,224 and a metropolitan population of 1,930,260 . With the completion of the transnational Øresund Bridge in 2000, Copenhagen has become the centre of the increasingly integrating Øresund Region...
, Denmark
Denmark
Denmark is a Scandinavian country in Northern Europe. The countries of Denmark and Greenland, as well as the Faroe Islands, constitute the Kingdom of Denmark . It is the southernmost of the Nordic countries, southwest of Sweden and south of Norway, and bordered to the south by Germany. Denmark...
under the tutelage of August Bournonville
August Bournonville
August Bournonville was a Danish ballet master and choreographer. August was the son of Antoine Bournonville, a dancer and choreographer trained under the French choreographer, Jean Georges Noverre, and the nephew of Julie Alix de la Fay, née Bournonville, of the Royal Swedish Ballet.August was...
. She officially debuted in 1834 at the theater and took on the leading role of Astrid in Bournonville's Valdemar in 1835. Soon the relationship between Bournonville and Grahn began to sour as she yearned to dance with the famed Paris Opera Ballet
Paris Opera Ballet
The Paris Opera Ballet is the oldest national ballet company in the world, and many European and international ballet companies can trace their origins to it...
. She eventually received royal permission to leave; after her departure in 1836, she never returned to Denmark.

In 1839, Grahn had overstayed the terms of her formal leave, and was dropped from the Royal Danish Ballet's rolls. She had been appearing with the Paris 'Opera' Ballet; from 1839 to 1845, extending her audience base, Grahn danced in several cities, including London
London
London is the capital city of :England and the :United Kingdom, the largest metropolitan area in the United Kingdom, and the largest urban zone in the European Union by most measures. Located on the River Thames, London has been a major settlement for two millennia, its history going back to its...
, St. Petersburg, and Milan
Milan
Milan is the second-largest city in Italy and the capital city of the region of Lombardy and of the province of Milan. The city proper has a population of about 1.3 million, while its urban area, roughly coinciding with its administrative province and the bordering Province of Monza and Brianza ,...
. In 1845, her place among the accepted solists of her day was acknowledged when she was invited to dance Perrot's Pas de Quatre
Pas de Quatre
Pas de Quatre is a ballet divertissement choreographed by Jules Perrot in 1845, on the suggestion of Benjamin Lumley, Director at His Majestys Theatre to music composed by Cesare Pugni....
alongside the already famous dancers Fanny Cerrito
Fanny Cerrito
Fanny Cerrito, originally Francesca Cerrito , was an Italian ballet dancer and choreographer.Born in Naples, she studied under Carlo Blasis and the French choreographers Jules Perrot and Arthur Saint-Léon, to the latter of whom she was married from 1845–1851. Notable roles included Ondine and a...
, Carlotta Grisi
Carlotta Grisi
Carlotta Grisi, real name Caronne Adele Josephine Marie Grisi was an Italian ballet dancer born in Visinada, Istria . She was trained at the ballet school of Teatro alla Scala in Milan and later with dancer/balletmaster Jules Perrot...
, and Marie Taglioni
Marie Taglioni
Marie Taglioni was a famous Italian/Swedish ballerina of the Romantic ballet era, a central figure in the history of European dance.-Biography:...
.

After 1846, Grahn toured much of Europe, not only dancing, but also producing several ballets, including a revival of Perrot's
Jules Perrot
Jules-Joseph Perrot was a dancer and choreographer who later became Balletmaster of the Imperial Ballet in St. Petersburg, Russia...
Catarina, and her even her own play Bacchus et Ariadne. Grahn moved to Hamburg
Hamburg
-History:The first historic name for the city was, according to Claudius Ptolemy's reports, Treva.But the city takes its modern name, Hamburg, from the first permanent building on the site, a castle whose construction was ordered by the Emperor Charlemagne in AD 808...
, Germany in 1848 and became so fond of the country that she built a home in Munich
Munich
Munich The city's motto is "" . Before 2006, it was "Weltstadt mit Herz" . Its native name, , is derived from the Old High German Munichen, meaning "by the monks' place". The city's name derives from the monks of the Benedictine order who founded the city; hence the monk depicted on the city's coat...
.

Grahn retired from dancing in 1856 and was married to Friedrich Young. She became ballet mistress from 1858 to 1861 in Leipzig
Leipzig
Leipzig Leipzig has always been a trade city, situated during the time of the Holy Roman Empire at the intersection of the Via Regia and Via Imperii, two important trade routes. At one time, Leipzig was one of the major European centres of learning and culture in fields such as music and publishing...
, Germany and from 1869 to 1875 at the Court Opera in Munich. She died in Munich in 1907, and left her generous estate to the city.