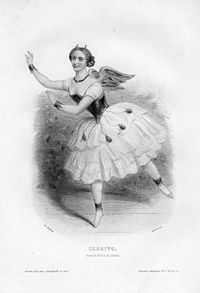 Fanny Cerrito, originally Francesca Cerrito (11 May 1817 – 6 May 1909), was an Italian
Italy
Italy , officially the Italian Republic languages]] under the European Charter for Regional or Minority Languages. In each of these, Italy's official name is as follows:;;;;;;;;), is a unitary parliamentary republic in South-Central Europe. To the north it borders France, Switzerland, Austria and...
ballet
Ballet
Ballet is a type of performance dance, that originated in the Italian Renaissance courts of the 15th century, and which was further developed in France and Russia as a concert dance form. The early portions preceded the invention of the proscenium stage and were presented in large chambers with...
dancer and choreographer.

Born in Naples
Naples
Naples is a city in Southern Italy, situated on the country's west coast by the Gulf of Naples. Lying between two notable volcanic regions, Mount Vesuvius and the Phlegraean Fields, it is the capital of the region of Campania and of the province of Naples...
, she studied under Carlo Blasis
Carlo Blasis
Carlo Blasis was an Italian dancer, choreographer and dance theoretician. He is well known for his very rigorous dance classes, sometimes lasting four hours long.Blasis was born in Naples...
and the French choreographers Jules Perrot
Jules Perrot
Jules-Joseph Perrot was a dancer and choreographer who later became Balletmaster of the Imperial Ballet in St. Petersburg, Russia...
and Arthur Saint-Léon
Arthur Saint-Leon
Arthur Saint-Léon was the Maître de Ballet of St. Petersburg Imperial Ballet from 1859 until 1869 and is famous for creating the choreography of the ballet Coppélia.-Biography:...
, to the latter of whom she was married from 1845–1851. Notable roles included Ondine
Ondine (ballet)
Ondine, ou La naïade is a ballet with choreography by Jules Perrot and music by Cesare Pugni, with a libretto inspired by the novel Undine by Friedrich de la Motte Fouqué. Pugni dedicated his score to the Duchess of Cambridge, Princess Augusta, a long-time balletomane and patron of the arts in...
and a part in Pas de Quatre
Pas de Quatre
Pas de Quatre is a ballet divertissement choreographed by Jules Perrot in 1845, on the suggestion of Benjamin Lumley, Director at His Majestys Theatre to music composed by Cesare Pugni....
(1845).
The source of this article is wikipedia, the free encyclopedia.  The text of this article is licensed under the GFDL.