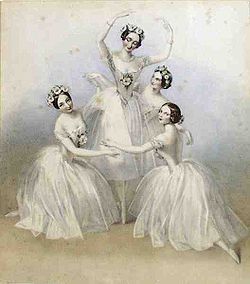 Pas de Quatre is a ballet
Ballet
Ballet is a type of performance dance, that originated in the Italian Renaissance courts of the 15th century, and which was further developed in France and Russia as a concert dance form. The early portions preceded the invention of the proscenium stage and were presented in large chambers with...
divertissement
Divertissement
Divertissement is used, in a similar sense to the Italian 'divertimento', for a light piece of music for a small group of players, however the French term has additional meanings....
choreographed by Jules Perrot
Jules Perrot
Jules-Joseph Perrot was a dancer and choreographer who later became Balletmaster of the Imperial Ballet in St. Petersburg, Russia...
in 1845, on the suggestion of Benjamin Lumley, Director at His Majestys Theatre to music composed by Cesare Pugni
Cesare Pugni
Cesare Pugni was an Italian composer of ballet music, a pianist and a violinist. In his early career he composed operas, symphonies, and various other forms of orchestral music. Pugni is most noted for the ballets he composed while serving as Composer of the Ballet Music to Her Majesty's Theatre...
.

On the night it premiered in London
London
London is the capital city of :England and the :United Kingdom, the largest metropolitan area in the United Kingdom, and the largest urban zone in the European Union by most measures. Located on the River Thames, London has been a major settlement for two millennia, its history going back to its...
, (July 1845) it caused a sensation with the critics and the public alike. The reason for this was that it brought together, on one stage, the four greatest ballerinas of the time. The ballerinas were, in order of appearance, Lucile Grahn
Lucile Grahn
Lucile Alexia Grahn was the first internationally renowned Danish ballerina and one of the popular dancers of the Romantic ballet era....
, Carlotta Grisi
Carlotta Grisi
Carlotta Grisi, real name Caronne Adele Josephine Marie Grisi was an Italian ballet dancer born in Visinada, Istria . She was trained at the ballet school of Teatro alla Scala in Milan and later with dancer/balletmaster Jules Perrot...
, Fanny Cerrito
Fanny Cerrito
Fanny Cerrito, originally Francesca Cerrito , was an Italian ballet dancer and choreographer.Born in Naples, she studied under Carlo Blasis and the French choreographers Jules Perrot and Arthur Saint-Léon, to the latter of whom she was married from 1845–1851. Notable roles included Ondine and a...
, and Marie Taglioni
Marie Taglioni
Marie Taglioni was a famous Italian/Swedish ballerina of the Romantic ballet era, a central figure in the history of European dance.-Biography:...
. The order of appearance was done by age, from youngest to oldest, to quelch further confrontations between them. The original cast of Pas de Quatre only danced four performances together; Queen Victoria and Prince Albert were in attendance on July 12, 1845, at the third of these four performances.

The fifth great Romantic ballerina of the time, Fanny Elssler
Fanny Elssler
Fanny Elssler - 27 November 1884), born Franziska Elßler, was an Austrian ballerina of the 'Romantic Period'.- Life :Daughter of Johann Florian Elssler, a second generation employee of Prince Esterhazy in Eisenstadt. Both Johann and his brother Josef were employed as copyists to the Prince's...
, was invited to take part in the gala event but declined to do so; the young Lucile Grahn accepted without hesitation.

Nearly one hundred years later, in 1941, the Ballet was restaged by choreographer Anton Dolin
Anton Dolin
Sir Anton Dolin was an English ballet dancer and choreographer.Dolin was born in Slinfold in Sussex as Sydney Francis Patrick Chippendall Healey-Kay but was generally known as Patrick Kay. He joined Sergei Diaghilev's Ballets Russes in 1921, was a principal there from 1924, and was a principal...
. The dancers he used were, in order of appearance: Nathalie Krassovska as Lucile Grahn, Mia Slavenska as Carlotta Grisi, Alexandra Danilova
Alexandra Danilova
Aleksandra Dionisyevna Danilova was a Russian-born prima ballerina who became an American citizen....
as Fanny Cerrito, and Alicia Markova
Alicia Markova
Dame Alicia Markova, DBE, DMus, was an English ballerina and a choreographer, director and teacher of classical ballet. Most noted for her career with Sergei Diaghilev's Ballets Russes and touring internationally, she was widely considered to be one of the greatest classical ballet dancers of the...
as Marie Taglioni. Since then many ballet companies and dancers have performed the piece.
The source of this article is wikipedia, the free encyclopedia.  The text of this article is licensed under the GFDL.