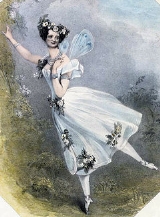 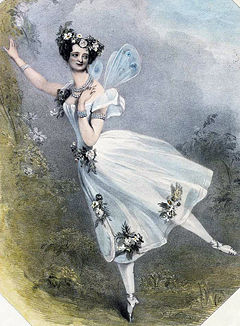 Marie Taglioni was a famous Italian/Swedish ballerina
Ballerina
A ballerina is a title used to describe a principal female professional ballet dancer in a large company; the male equivalent to this title is danseur or ballerino...
of the Romantic ballet
Romantic ballet
The Romantic ballet is defined primarily by an era in ballet in which the ideas of Romanticism in art and literature influenced the creation of ballets. The era occurred during the early to mid 19th century primarily at the Théâtre de l'Académie Royale de Musique of the Paris Opera Ballet and Her...
era, a central figure in the history of European dance
History of dance
Dance does not often leave behind clearly identifiable physical artifacts that last over millennia, such as stone tools, hunting implements or cave paintings...
.

Taglioni was born in Stockholm, Sweden, to the Italian choreographer
Choreography
Choreography is the art of designing sequences of movements in which motion, form, or both are specified. Choreography may also refer to the design itself, which is sometimes expressed by means of dance notation. The word choreography literally means "dance-writing" from the Greek words "χορεία" ...
Filippo Taglioni
Filippo Taglioni
Filippo Taglioni was an Italian dancer and choreographer and personal teacher to his own daughter, the famous Romantic ballerina Marie Taglioni. He is the son of Carlo and father of both Marie and Paul...
and the Swedish ballet dancer Sophie Karsten
Sophie Karsten
Hedvig Sophie Karsten was a Swedish ballerina and artist .Born to opera singers Christoffer Christian Karsten and Sophie Stebnowska, she was the sister of painter Elisabeth Charlotta Karsten....
, maternal granddaughter of the Swedish opera singer Christoffer Christian Karsten
Christoffer Christian Karsten
Christoffer Christian Karsten was a Swedish opera singer, sometimes called the greatest male opera singer in Swedish history...
and of the Polish opera singer and actress Sophie Stebnowska
Sophie Stebnowska
Mariane Theresia Sophie Stebnowska , was a Polish opera singer, actor and harpist. She was among the great talents of the Royal Swedish Opera in Stockholm during the reign of King Gustav III of Sweden...
. Taglioni rose to fame as a danseuse when her father (and teacher) created the ballet La Sylphide
La Sylphide
La Sylphide is one of the world's oldest surviving romantic ballets. There were two versions of the ballet; the version choreographed by the Danish balletmaster August Bournonville is the only version known to have survived....
(1832) for her. Designed as a showcase for Taglioni's talent, it was the first ballet where dancing en pointe
En pointe
En pointe means "on the tip" and is a part of classical ballet technique, usually practised using specially reinforced shoes called pointe shoes or toe shoes. The technique developed from the desire for dancers to appear weightless and sylph-like and has evolved to enable dancers to dance on the...
had an aesthetic rationale and was not merely an acrobatic stunt, often involving ungraceful arm movements and exertions, as had been the approach of dancers in the late 1820s.

In 1827 Taglioni left the Ballet of Her Majesty's Theatre to take up a three-year contract in Saint Petersburg
Saint Petersburg
Saint Petersburg is a city and a federal subject of Russia located on the Neva River at the head of the Gulf of Finland on the Baltic Sea...
with the Imperial Ballet
Mariinsky Ballet
The Mariinsky Ballet is a classical ballet company based at the Mariinsky Theatre in Saint Petersburg, Russia. Founded in the 18th century and originally known as the Imperial Russian Ballet, the Mariinsky Ballet is one of the world's leading ballet companies...
(known today as the Kirov/Mariinsky Ballet). It was in Russia after her last performance in the country (1842) and at the height of the "cult of the ballerina", that a pair of her pointe shoes
Pointe shoes
A pointe shoe is a type of shoe worn by ballet dancers when performing pointework. Pointe shoes developed from the desire for dancers to appear weightless and sylph-like and have evolved to enable dancers to dance on the tips of their toes for extended periods of time...
were sold for two hundred rubles
Russian ruble
The ruble or rouble is the currency of the Russian Federation and the two partially recognized republics of Abkhazia and South Ossetia. Formerly, the ruble was also the currency of the Russian Empire and the Soviet Union prior to their breakups. Belarus and Transnistria also use currencies with...
, reportedly to be cooked, served with a sauce and eaten by a group of balletomanes.

Taglioni was also known for shortening her skirt in the performance La Sylphide, which was considered highly scandalous at the time. She shortened all of her skirts to show off her excellent pointe work, which the long skirts hid. Her father was approving of the shortening of the skirt because he also wanted everyone to see how good his daughter was en pointe.

Taglioni retired from performing in 1847; for a time she took up residence at the Ca' d'Oro
Ca' d'Oro
Ca' d'Oro is a palace on the Grand Canal in Venice, northern Italy. One of the older palazzi, it has always been known as Ca' d'Oro due to the gilt and polychrome external decorations which once adorned its walls.The Palazzo was built between 1428 and 1430 for the Contarini family, who provided...
on the Grand Canal in Venice. When the ballet of the Paris Opera was reorganized on stricter, more professional lines, she was its guiding spirit. With the director of the new Conservatoire de danse, Lucien Petipa
Lucien Petipa
Lucien Petipa was a French ballet dancer in the early 19th century and was the brother of the famous balletmaster of the Russian Imperial Ballet , Marius Petipa...
, and Petipa's former pupil, the choreographer Louis Mérante
Louis Mérante
Louis Alexandre Mérante was a dancer and choreographer, the Maître de Ballet of the Paris Opera Ballet at the Salle Le Peletier until its destruction by fire in 1873, and subsequently the first Ballet Master at the company's new Palais Garnier, which opened in 1875...
, she figured on the six-member select jury of the first annual competition for the Corps de ballet
Corps de ballet
In ballet, the corps de ballet is the group of dancers who are not soloists. They are a permanent part of the ballet company and often work as a backdrop for the principal dancers. A corps de ballet works as one, with synchronized movements and corresponding positioning on the stage...
, held April 13, 1860.

Later she taught social dance
Social dance
Social dance is a major category or classification of danceforms or dance styles, where sociability and socializing are the primary focuses of the dancing...
to children and society ladies; she also took a limited number of ballet pupils. Her only choreographic work was Le papillon
Le Papillon (ballet)
Le papillon is a "fantastic ballet" in 2 acts, with choreography by Marie Taglioni and music by Jacques Offenbach to a libretto by Jules-Henri Vernoy de Saint-Georges....
(1860) for her student Emma Livry
Emma Livry
Emma Livry was one of the last ballerinas of the Romantic ballet era and a protégée of Marie Taglioni...
, who is remembered for dying in 1863 when her costume was set alight by a gas lamp (limelight
Limelight
Limelight is a type of stage lighting once used in theatres and music halls. An intense illumination is created when an oxyhydrogen flame is directed at a cylinder of quicklime , which can be heated to 2572 °C before melting. The light is produced by a combination of incandescence and...
) used for stage lighting
Stage lighting
Modern stage lighting is a flexible tool in the production of theatre, dance, opera and other performance arts. Several different types of stage lighting instruments are used in the pursuit of the various principles or goals of lighting. Stage lighting has grown considerably in recent years...
. Taglioni lived much longer, dying in Marseille in 1884. Johann Strauss II
Johann Strauss II
Johann Strauss II , also known as Johann Baptist Strauss or Johann Strauss, Jr., the Younger, or the Son , was an Austrian composer of light music, particularly dance music and operettas. He composed over 500 waltzes, polkas, quadrilles, and other types of dance music, as well as several operettas...
composed the Marie Taglioni Polka (Op. 173) in her honour, using music from ballets in which she had appeared.