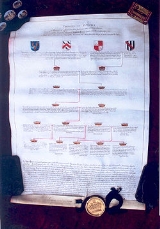 Encyclopedia
Family history is the systematic narrative and research of past events relating to a specific family
Family
In human context, a family is a group of people affiliated by consanguinity, affinity, or co-residence. In most societies it is the principal institution for the socialization of children...
, or specific families. 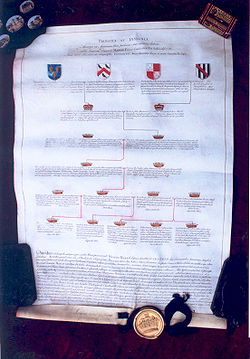 While genealogy
Genealogy
Genealogy is the study of families and the tracing of their lineages and history. Genealogists use oral traditions, historical records, genetic analysis, and other records to obtain information about a family and to demonstrate kinship and pedigrees of its members...
is the convenient label for the field, family history is the over-arching term, since genealogy in the strict sense is only concerned with tracing unified lineages. Other sectors of family history, such as one-name studies
One-name study
A one-name study is a project researching a specific surname, as opposed to a particular pedigree or descendancy...
, may pay only rudimentary attention to lineages, or may emphasize biography rather than vital data.

Forms of family history research include:

Unlike related forms of micro-history, such as corporate histories
Corporate history
A corporate history is a chronological account of a business or other co-operative organization. Usually it is produced in written format but it can also be done in audio or audiovisually...
or local studies
Local history
Local history is the study of history in a geographically local context and it often concentrates on the local community. It incorporates cultural and social aspects of history...
, family history research begins with only an approximate notion of the extent of the entity - the extended family - and never fully defines it, since the early origins of all families become invisible in prehistorical times. DNA genealogy
Genetic genealogy
Genetic genealogy is the application of genetics to traditional genealogy. Genetic genealogy involves the use of genealogical DNA testing to determine the level of genetic relationship between individuals.-History:...
offers some hope of moving this boundary further back into time.

Family history needs little justification in communitarian
Collective identity
The term collective identity may refer to a variety of concepts. In general however, these concepts generally pertain to phenomena where an individuals' perceived membership in a social group impacts upon their own identity in some way. The idea of a collective identity has received attention in a...
societies, where one's identity is defined as much by one's kin network as by individual achievement, and the question "Who are you?" would be answered by a description of father, mother, and tribe. New Zealand Māori, for example, learn whakapapa
Whakapapa
Whakapapa , or genealogy, is a fundamental principle that permeates the whole of Māori culture. However, it is more than just a genealogical 'device'...
(genealogies) to discover who they are.

Until the late 19th century, family histories were almost exclusively of interest to persons who had obtained their wealth or rank by inheritance. Other people, who had inherited nothing, might, in extreme cases, suppress their family history as a matter of shame.

In Nazi Germany, family histories were compiled to affirm individuals' affiliation with the "master race" and to adhere to legal requirements for marriage. In Germany today, family history is still often perceived as a threat to privacy rather than as a source of self-esteem. Most 20th-century sources remain unavailable
Classified information
Classified information is sensitive information to which access is restricted by law or regulation to particular groups of persons. A formal security clearance is required to handle classified documents or access classified data. The clearance process requires a satisfactory background investigation...
to the public on privacy grounds. Funding of support for family history at archives is limited. German family historians thus tend to emphasize instead how family history can contribute to learning and science.

Modern family history explores new sources of status, such as celebrating the resilience of families that survived generations of poverty or slavery, or the success of families in integrating across racial or national boundaries. Some family histories even emphasize links to celebrity criminals, such as the bushranger Ned Kelly
Ned Kelly
Edward "Ned" Kelly was an Irish Australian bushranger. He is considered by some to be merely a cold-blooded cop killer — others, however, consider him to be a folk hero and symbol of Irish Australian resistance against the Anglo-Australian ruling class.Kelly was born in Victoria to an Irish...
in Australia.

The growing interest in family history in the media coupled with easier access to online records has allowed people with a curiosity to start to investigate their ancestry. This curiosity can be particularly strong due to lost family histories, for example, through adoption
Adoption
Adoption is a process whereby a person assumes the parenting for another and, in so doing, permanently transfers all rights and responsibilities from the original parent or parents...
or bereavement.

In the narrower sense of the term, a family history is a biography of a single family over several generations, based on a tested genealogy and fleshed out with the fuller story of the family's place in society, the dramas of its achievements or failures and its acquisition or loss of wealth and rank.

Such a study mainly draws on oral history for the recent period and archival records for the period beyond living memory. Where an individual's own story is unknown, much can be inferred from other literature. For example, a single soldier's experiences can be inferred from the history of his military unit, or a migrant's journey can be described from the shipboard diary of a fellow traveler. 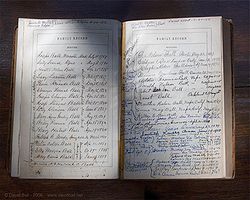 Family history can either be in the form of a printed document, electronic document or sound or video recording that preserves this history for future generations. The readers will expect it to describe where the family originated from, name the members of the family and state who they married.

Family Histories are often created as a memorial for the deceased and are written to be passed down to future generations.

Some records that are used to create family histories are:


Today many people are using these records to recover their family history. But most of these records include only technical details of a person's life, such as their birth date, whom they married, the jobs they did, and so forth, but they contain very little about the person themselves such as their likes, dislikes, hobbies, hopes and dreams. These personal details can only be gleaned by more detailed research, and the use of social history. Some family histories are published and become useful historical records in their own right.

Family history websites and indexes are also useful, and for modern researchers they are often the main source of information. Some offer resources (e.g. censuses or civil registration records) that have previously only been available in microform or as hard copies; some are designed for individual researchers to share their information with others; some exist primarily to link people who share the same ancestors, or the same research interests. Some websites offer useful free resources to family historians in addition to helpful hints and tips.

The benefits of family history projects may vary according to the people who pursue the hobby. Some schools engage students in such projects as a means to reinforce lessons regarding immigration and the history of the nation.
Other benefits include family medical histories with families with serious medical conditions that are hereditary.