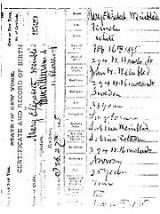 Overview
A birth certificate is a vital record
Vital record
Vital records are records of life events kept under governmental authority, including birth certificates, marriage licenses, and death certificates. In some jurisdictions, vital records may also include records of civil unions or domestic partnerships....
that documents the birth of a child. The term "birth certificate" can refer to either the original document certifying the circumstances of the birth or to a certified copy of or representation of the ensuing registration of that birth. Depending on the jurisdiction, a record of birth might or might not contain verification of the event by such as a midwife or doctor.
The documentation of births is a practice widely held throughout human civilization, especially in China, Egypt, Greece, Rome, and Persia.

What is the name of the United States Air Force base in Instanbul, Turkey?

How do I obtain a birth certificate from a child born on an Uniated Stace Air Force Base in Instanbul, Turkey?
More 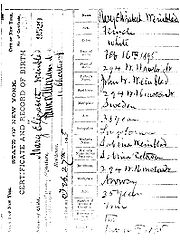 The documentation of births is a practice widely held throughout human civilization, especially in China, Egypt, Greece, Rome, and Persia. The original purpose of vital statistics was for tax purposes and for the determination of available military manpower. Births were initially registered with churches, who maintained registers of births. This practice continued into the 19th century. The compulsory registration of births with governmental agencies is a practice that originated in the United Kingdom
United Kingdom
The United Kingdom of Great Britain and Northern IrelandIn the United Kingdom and Dependencies, other languages have been officially recognised as legitimate autochthonous languages under the European Charter for Regional or Minority Languages...
in 1853.

Most countries have statutes and laws that regulate the registration of births. In all countries, it is the responsibility of the mother's physician
Physician
A physician is a health care provider who practices the profession of medicine, which is concerned with promoting, maintaining or restoring human health through the study, diagnosis, and treatment of disease, injury and other physical and mental impairments...
, midwife, hospital administrator, or the parents of the child to see that the birth is properly registered with the appropriate government agency
Government agency
A government or state agency is a permanent or semi-permanent organization in the machinery of government that is responsible for the oversight and administration of specific functions, such as an intelligence agency. There is a notable variety of agency types...
.

The actual record of birth is stored with a government agency. That agency will issue certified copies or representations of the original birth record upon request, which can be used to apply for government benefits, such as passports. The certification is signed and/or sealed by the registrar or other custodian of birth records, who is commissioned by the government.

The right of every child to a name and nationality, and the responsibility of national governments to achieve this are contained in Articles 7 and 8 in the United Nations Convention on the Rights of the Child: "The child shall be registered immediately after birth and shall have the right from birth to a name, the right to acquire a nationality..." (CRC Article 7) and "States Parties undertake to respect the right of the child to preserve his or her identity, including nationality, name and family relations..." (CRC Article 8).

"...it's a small paper but it actually establishes who you are and gives access to the rights and the privileges, and the obligations, of citizenship" - Archbishop Desmond Tutu, February 2005.


Despite 191 countries ratifying the Convention, the births of millions of children worldwide go unregistered. By their very nature, data concerning unregistered children are approximate; however, it was estimated in 2008 that 51 million babies – more than two fifths of those born worldwide – were not registered at birth. This phenomenon disproportionately impacts indigenous populations and even in many developed countries, contributes to difficulties in fully accessing civic rights.

Birth registration opens the door to rights to children and adults which many other human beings take for granted: to prove their age; to prove their nationality; to receive healthcare; to go to school; to take exams; to be adopted; to protection from under-age military service or conscription; to marry; open a bank account; to hold a driving licence; to obtain a passport; to inherit money or property; and to vote or stand for elected office.

There are many reasons why births go unregistered, including social and cultural beliefs and attitudes; alternative documents and naming ceremonies; remote areas, poor infrastructure; economic barriers; lack of office staff, equipment and training; legal and political restrictions; fear of discrimination and persecution; war, conflict and unrest or simply the fact that there is no system in place.

Retrospective registration may be necessary where there is a backlog of children whose births have gone unregistered. In Senegal, the government is facilitating retrospective registration through free local court hearings and the number of unregistered children has fallen considerably as a result.
In Sierra Leone, the government gave the National Office of Births and Deaths special permission to issue birth certificates to children over seven. In Bolivia, there was a successful three-year amnesty for the free registration of young people aged between 12 and 18.

Statelessness, or the lack of effective nationality, impacts the daily lives of some 11-12 million people around the world. Perhaps those who suffer most are stateless infants, children, and youth. Though born and raised in their parents’ country of habitual residence, they lack formal recognition of their existence.


Birth certificates in England and Wales

In England and Wales the description "birth certificate" is commonly used to describe a copy of the relevant entry in a register of births.

The national registration of births, marriages and deaths in England and Wales
England and Wales
England and Wales is a jurisdiction within the United Kingdom. It consists of England and Wales, two of the four countries of the United Kingdom...
started in 1837, but at first there was no penalty for failing to register a birth. In the system, all births are recorded in "registers", which have columns for various particulars of the birth, usually including the name of the child, sex, the names of the parents, the date of the birth, the location of the birth, and sometimes additional information such as the name of the attending physician, the race of the child, or the occupation of the parents. These birth registers are maintained by some government agency, who will issue certified copies or representations of the entry upon request.

Before the government's registration system was created evidence of births and/or baptisms (and also marriages and death or burials) was dependant on the events being recorded in the records of the Church of England or in those of other various churches not all of which maintained such records or all types of those records. Copies of such records are not issued by the General Register Office but can be obtained from these churches or from the local or national archive which usually now keeps the records in original or copy form.


Types of certified copies issued in England and Wales

Each "full" birth certificate issued is actually a certified copy of an entry from the register of births, either that held by the local Register office
Register office
A register office is a British term for a civil registry, a government office and depository where births, deaths and marriages are officially recorded and where you can get officially married, without a religious ceremony...
or at the General Register Office for England and Wales, Southport; it does not certify the birth but the information given in the register entry thus being legally conclusive evidence of the event unless proved otherwise. The full certificate is a copy of the entry, showing the child's surname, forename(s), date of birth, sex, place of birth, the parent(s) name(s), their address and occupations at the time of registration. Modern certified copies issued by the General Register Office will usually be photocopies of the page or relevant part of a page in the GRO's registers but will be written or typed copies if the original is poor or e.g. contains intrusions from adjacent records or annotations which do not form part of the prescribed record.

In addition, one can obtain a "short" birth certificate, which is an abstract of the original entry and only includes the surname, forename(s), date of birth, sex, registration district and sub-district in which the birth took place. No fee is chargeable for this when issued at the time of registration and these are commonly found among personal documents inherited from older relatives whose parents might have had no practical need for a full extract; short extracts issued after the original registration was made are subject to a prescribed fee. These extracts nowadays have little practical usability due to the reduced information shown, in the past often being used to avoid revealing the marital status of the parents or as a cheaper written statement of somebody's birth date and place when a recipient did not need the amount of corrobarative detail which is now often required due to e.g. occurrences of identity theft
Identity theft
Identity theft is a form of stealing another person's identity in which someone pretends to be someone else by assuming that person's identity, typically in order to access resources or obtain credit and other benefits in that person's name...
.

The original registrations are required by law to be issued in the form of certified copies to any person who identifies an index entry and pays the prescribed fee. They can be ordered by registered users from the General Register Office Certificate Ordering Service or by postal or telephone ordering from the General Register Office or by post or in person from local registrars.


Birth certificates in the United States

In the U.S., the issuance of birth certificates is a function of the states, even though birthplace is a determinant of American citizenship.

The U.S. National Center for Health Statistics creates standard forms that are recommended for use by the individual states to document births. However, states are free to create their own forms. As a result, neither the appearance nor the information content of birth certificate forms is uniform across states. These forms are completed by the attendant at birth or a hospital administrator, which are then forwarded to a local or state registrar, who stores the record and issues certified copies upon request.

According to the Department of Health and Human Services, Office of Inspector General, as of 2000 there were more than 6,000 entities issuing birth certificates. The Inspector General report states that according to staff at the Immigration and Naturalization Service’s Forensics Document Laboratory the number of legitimate birth certificate versions in use exceeded 14,000.

In the case of applying for a US passport, not all legitimate birth certificates are acceptable:

Beginning April 1, 2011, all birth certificates must also include the full names of the applicant's parent(s).

Most hospitals in the U.S. issue a souvenir birth certificate which typically includes the footprints of the newborn. However, these birth certificates are not legally accepted as proof of age or citizenship, and are frequently rejected by the Bureau of Consular Affairs
Bureau of Consular Affairs
The Bureau of Consular Affairs is a bureau of the United States Department of State within that department's management office. The mission of the Bureau is to administer laws, formulate regulations and implement policies relating to the broad range of consular services and immigration. , the...
during passport
United States passport
United States passports are passports issued to citizens and non-citizen nationals of the United States of America. They are issued exclusively by the U.S. Department of State. Besides issuing passports , also limited use passport cards are issued by the same organization subject to the same...
applications. Many Americans believe the souvenir records to be their official birth certificates, when in reality they hold little legal value.


Birth certificates in cases of adoptions