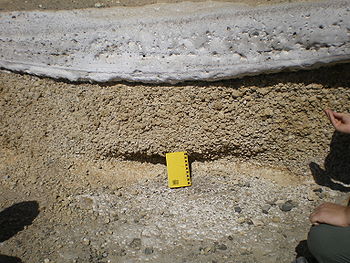 Phreatomagmatic eruptions are defined as juvenile
Ejecta
Ejecta can mean:*In volcanology, particles that came out of a volcanic vent, traveled through the air or under water, and fell back on the ground surface or on the ocean floor...
forming eruptions as a result of interaction between water and magma
Magma
Magma is a mixture of molten rock, volatiles and solids that is found beneath the surface of the Earth, and is expected to exist on other terrestrial planets. Besides molten rock, magma may also contain suspended crystals and dissolved gas and sometimes also gas bubbles. Magma often collects in...
. They are different from magmatic and phreatic eruptions. The products of phreatomagmatic eruptions contain juvenile clasts, unlike phreatic eruptions, and are the result of interaction between magma and water, unlike magmatic eruptions. It is very common for a large explosive eruption to have magmatic and phreatomagmatic components.

Several competing theories exist as to the exact mechanism of ash formation. The most common is the theory of explosive thermal contraction of particles under rapid cooling from contact with water. In many cases the water is supplied by the sea, for example with Surtsey
Surtsey
Surtsey is a volcanic island off the southern coast of Iceland. At it is also the southernmost point of Iceland. It was formed in a volcanic eruption which began 130 metres below sea level, and reached the surface on 15 November 1963. The eruption lasted until 5 June 1967, when the island...
. In other cases the water may be present in a lake or Caldera
Caldera
A caldera is a cauldron-like volcanic feature usually formed by the collapse of land following a volcanic eruption, such as the one at Yellowstone National Park in the US. They are sometimes confused with volcanic craters...
-lake, for example Santorini
Santorini
Santorini , officially Thira , is an island located in the southern Aegean Sea, about southeast from Greece's mainland. It is the largest island of a small, circular archipelago which bears the same name and is the remnant of a volcanic caldera...
, where the phreatomagmatic component of the Minoan eruption was a result of both a lake and later the sea. There have also been examples of interaction between magma and water in an aquifer. Many of the cinder cones on Tenerife
Tenerife
Tenerife is the largest and most populous island of the seven Canary Islands, it is also the most populated island of Spain, with a land area of 2,034.38 km² and 906,854 inhabitants, 43% of the total population of the Canary Islands. About five million tourists visit Tenerife each year, the...
are believed to be phreatomagmatic because of these circumstances.

The other competing theory is based on fuel-coolant reactions, which have been modeled for the nuclear industry. Under this theory the fuel (in this case, the magma) fragments upon contact with a coolant (the sea, a lake or aquifer). The propagating stress waves and thermal contraction widen cracks and increase the interaction surface area, leading to explosively rapid cooling rates. The two mechanisms proposed are very similar and the reality is most likely a combination of both.

This is the term used to describe glass found with pillow basalts that were produced by non-explosive quenching and fracturing of basaltic glass. These are still classed as phreatomagmatic eruptions, as they produce juvenile clasts from the interaction of water and magma. They can be formed at water depths of >500 m,, where hydrostatic pressure is high enough to inhibit vesiculation in basaltic magma.

Hyalotuff is the term used to define rocks formed by the explosive fragmentation of glass during phreatomagmatic eruptions at shallow water depths (or within aquifers). Hyalotuffs have a layered nature that is believed to be a result of dampened oscillation in discharge rate, with a period of several minutes. The deposits are much finer grained than the deposits of magmatic eruptions, due to the much higher fragmentation of the type of eruption. The deposits appear better sorted than magmatic deposits in the field because of their fine nature, but grain size analysis reveals that the deposits are much more poorly sorted than their magmatic counterparts. A clast known as an accretionary lapilli
Lapilli
Lapilli is a size classification term for tephra, which is material that falls out of the air during a volcanic eruption or during some meteorite impacts. Lapilli means "little stones" in Latin. They are in some senses similar to ooids or pisoids in calcareous sediments.By definition lapilli range...
is distinctive to phreatomagmatic deposits, and is a major factor for identification in the field. Accretionary lapilli form as a result of the cohesive properties of wet ash, causing the particles to bind. They have a circular structure when specimens are viewed in hand and under the microscope.

A further control on the morphology
Morphology
Morphology may mean:*Morphology , the study of the structure and content of word forms*Morphology , the study of the form or shape of an organism or part thereof...
and characteristics of a deposit is the water to magma ratio. It is believed that the products of phreatomagmatic eruptions are fine grained and poorly sorted where the magma/water ratio is high, but when there is a lower magma/water ratio the deposits may be coarser and better sorted.

There are two types of vent landforms from the explosive interaction of magma and ground or surface water; Tuff Cones and Tuff Rings. Both of the landforms are associated with monogenetic volcanoes and polygenetic volcanoes. In the case of polygenetic volcanoes they are often interbedded with lavas, ignimbrites and ash- and lapilli
Lapilli
Lapilli is a size classification term for tephra, which is material that falls out of the air during a volcanic eruption or during some meteorite impacts. Lapilli means "little stones" in Latin. They are in some senses similar to ooids or pisoids in calcareous sediments.By definition lapilli range...
-fall deposits.

Tuff Rings have a low profile apron of tephra
Tephra
200px|thumb|right|Tephra horizons in south-central [[Iceland]]. The thick and light coloured layer at center of the photo is [[rhyolitic]] tephra from [[Hekla]]....
surrounding a wide crater (called a maar
Maar
A maar is a broad, low-relief volcanic crater that is caused by a phreatomagmatic eruption, an explosion caused by groundwater coming into contact with hot lava or magma. A maar characteristically fills with water to form a relatively shallow crater lake. The name comes from the local Moselle...
crater) that is generally lower than the surrounding topography. The tephra is often unaltered and thinly bedded, and is generally considered to be an ignimbrite
Ignimbrite
An ignimbrite is the deposit of a pyroclastic density current, or pyroclastic flow, a hot suspension of particles and gases that flows rapidly from a volcano, driven by a greater density than the surrounding atmosphere....
, or the product of a pyroclastic density current. They are built around a volcanic vent located in a lake
Lake
A lake is a body of relatively still fresh or salt water of considerable size, localized in a basin, that is surrounded by land. Lakes are inland and not part of the ocean and therefore are distinct from lagoons, and are larger and deeper than ponds. Lakes can be contrasted with rivers or streams,...
, coastal zone, marsh
Marsh
In geography, a marsh, or morass, is a type of wetland that is subject to frequent or continuous flood. Typically the water is shallow and features grasses, rushes, reeds, typhas, sedges, other herbaceous plants, and moss....
or an area of abundant groundwater
Groundwater
Groundwater is water located beneath the ground surface in soil pore spaces and in the fractures of rock formations. A unit of rock or an unconsolidated deposit is called an aquifer when it can yield a usable quantity of water. The depth at which soil pore spaces or fractures and voids in rock...
. 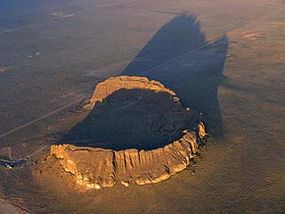 Tuff Cones are steep sloped and cone shaped. They have wide craters and are formed of highly altered, thickly bedded tephra. They are considered to be a taller variant of a tuff ring.

Santorini
Santorini
Santorini , officially Thira , is an island located in the southern Aegean Sea, about southeast from Greece's mainland. It is the largest island of a small, circular archipelago which bears the same name and is the remnant of a volcanic caldera...
is part of the Southern Aegean volcanic arc, 140 km north of Crete. The Minoan eruption of Santorini, was the latest eruption and occurred in the first half of the 17th century B.C. The eruption was of predominantly rhyodacite composition. The Minoan eruption had four phases. Phase 1 was a white to pink pumice fallout with dispersal axis trending ESE. The deposit has a maximum thickness of 6 m and ash flow layers are interbedded at the top. Phase 2 has ash and lapilli beds that are cross stratified with mega-ripples and dune like structures. The deposit thicknesses vary from 10 cm to 12 m. Phases 3 and 4 are pyroclastic density current deposits. Phases 1 and 3 were phreatomagmatic.

Mount Pinatubo
Mount Pinatubo
Mount Pinatubo is an active stratovolcano located on the island of Luzon, near the tripoint of the Philippine provinces of Zambales, Tarlac, and Pampanga. It is located in the Tri-Cabusilan Mountain range separating the west coast of Luzon from the central plains, and is west of the dormant and...
is on the Central Luzon landmass between the South China Sea
South China Sea
The South China Sea is a marginal sea that is part of the Pacific Ocean, encompassing an area from the Singapore and Malacca Straits to the Strait of Taiwan of around...
and the Philippine Sea
Philippine Sea
The Philippine Sea is a marginal sea east and north of the Philippines occupying an estimated surface area of 2 million mi² on the western part of the North Pacific Ocean...
. The 1991 eruption of Pinatubo was andesite and dacite in the pre-climactic phase but only dacite in the climactic phase. The climactic phase had a volume of 3.7-5.3 km³. The eruption consisted of sequentially increasing ash emissions, dome growth, 4 vertical eruptions with continued dome growth, 13 pyroclastic flows and a climactic vertical eruption with associated pyroclastic flows. The pre-climactic phase was phreatomagmatic.

The Hatepe eruption
Hatepe eruption
The Hatepe eruption around the year 180 CE was Lake Taupo's most recent major eruption, and New Zealand's largest eruption during the last 20,000 years. It ejected some of material , of which was ejected in the space of a few minutes...
in 180 AD was the latest major eruption at Lake Taupo
Lake Taupo
Lake Taupo is a lake situated in the North Island of New Zealand. With a surface area of , it is the largest lake by surface area in New Zealand, and the second largest freshwater lake by surface area in geopolitical Oceania after Lake Murray ....
in New Zealand
New Zealand
New Zealand is an island country in the south-western Pacific Ocean comprising two main landmasses and numerous smaller islands. The country is situated some east of Australia across the Tasman Sea, and roughly south of the Pacific island nations of New Caledonia, Fiji, and Tonga...
's Taupo Volcanic Zone
Taupo Volcanic Zone
The Taupo Volcanic Zone is a highly active volcanic V shaped area in the North Island of New Zealand that is spreading east -west at the rate of about 8mm per year...
. There was minor initial phreatomagmatic activity followed by the dry venting of 6 km3 of rhyolite forming the Hatepe Plinian Pumice. The vent was then infiltrated by large amounts of water causing the phreatomagmatic eruption that deposited the 2.5 km3 Hatepe Ash. The water eventually stopped the eruption though large amounts of water were still erupted from the vent. The eruption resumed with phreatomagmatic activity that deposited the Rotongaio Ash.