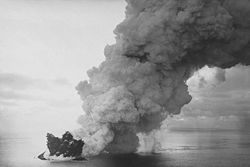 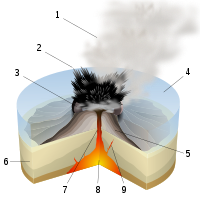 A Surtseyan eruption is a type of volcanic eruption that takes place in shallow sea
Sea
A sea generally refers to a large body of salt water, but the term is used in other contexts as well. Most commonly, it means a large expanse of saline water connected with an ocean, and is commonly used as a synonym for ocean...
s or lake
Lake
A lake is a body of relatively still fresh or salt water of considerable size, localized in a basin, that is surrounded by land. Lakes are inland and not part of the ocean and therefore are distinct from lagoons, and are larger and deeper than ponds. Lakes can be contrasted with rivers or streams,...
s. It is named after the island of Surtsey
Surtsey
Surtsey is a volcanic island off the southern coast of Iceland. At it is also the southernmost point of Iceland. It was formed in a volcanic eruption which began 130 metres below sea level, and reached the surface on 15 November 1963. The eruption lasted until 5 June 1967, when the island...
off the southern coast of Iceland
Iceland
Iceland , described as the Republic of Iceland, is a Nordic and European island country in the North Atlantic Ocean, on the Mid-Atlantic Ridge. Iceland also refers to the main island of the country, which contains almost all the population and almost all the land area. The country has a population...
.

These eruptions are commonly phreatomagmatic eruption
Phreatomagmatic eruption
Phreatomagmatic eruptions are defined as juvenile forming eruptions as a result of interaction between water and magma. They are different from magmatic and phreatic eruptions. The products of phreatomagmatic eruptions contain juvenile clasts, unlike phreatic eruptions, and are the result of...
s, representing violent explosions caused by rising basaltic or andesitic magma coming into contact with abundant, shallow groundwater or surface water. Tuff rings, pyroclastic cones of primarily ash, are built by explosive disruption of rapidly cooled magma. Other examples of these volcanoes: Capelinhos
Capelinhos
The Capelinhos is a monogenetic volcano located on the western coast of the island of Faial in the Azores. It is part of the larger Volcanic Complex of Capelo, that includes 20 escoria cones and lava fields that are aligned west-northwest to east-southeast from the Cabeço Gordo caldera...
, Faial Island
Faial Island
Faial Island , also known in English as Fayal, is a Portuguese island of the Central Group of the Azores....
, Azores
Azores
The Archipelago of the Azores is composed of nine volcanic islands situated in the middle of the North Atlantic Ocean, and is located about west from Lisbon and about east from the east coast of North America. The islands, and their economic exclusion zone, form the Autonomous Region of the...
; and Taal Volcano
Taal Volcano
Taal Volcano is a complex volcano located on the island of Luzon in the Philippines. Historical eruptions are concentrated on Volcano Island, an island near the middle of Lake Taal. The lake partially fills Taal Caldera, which was formed by powerful prehistoric eruptions between 140,000 to 5,380 BP...
, Batangas
Batangas
Batangas is a first class province of the Philippines located on the southwestern part of Luzon in the CALABARZON region. Its capital is Batangas City and it is bordered by the provinces of Cavite and Laguna to the north and Quezon to the east. Across the Verde Island Passages to the south is the...
, Philippines
Philippines
The Philippines , officially known as the Republic of the Philippines , is a country in Southeast Asia in the western Pacific Ocean. To its north across the Luzon Strait lies Taiwan. West across the South China Sea sits Vietnam...
.

Although similar in nature to phreatomagmatic eruptions, there are several specific characteristics: