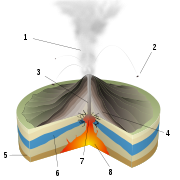 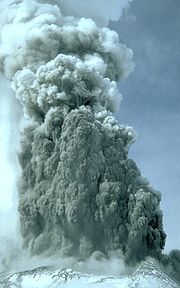 A phreatic eruption, also called a phreatic explosion or ultravulcanian eruption, occurs when rising magma
Magma
Magma is a mixture of molten rock, volatiles and solids that is found beneath the surface of the Earth, and is expected to exist on other terrestrial planets. Besides molten rock, magma may also contain suspended crystals and dissolved gas and sometimes also gas bubbles. Magma often collects in...
makes contact with ground or surface water. The extreme temperature of the magma (anywhere from 600 to 1170 °C (1,112 to 2,138 F)) causes near-instantaneous evaporation to steam
Steam
Steam is the technical term for water vapor, the gaseous phase of water, which is formed when water boils. In common language it is often used to refer to the visible mist of water droplets formed as this water vapor condenses in the presence of cooler air...
, resulting in an explosion of steam, water, ash, rock, and volcanic bomb
Volcanic bomb
A volcanic bomb is a mass of molten rock larger than 65 mm in diameter, formed when a volcano ejects viscous fragments of lava during an eruption. They cool into solid fragments before they reach the ground. Because volcanic bombs cool after they leave the volcano, they do not have grains...
s. At Mount St. Helens
Mount St. Helens
Mount St. Helens is an active stratovolcano located in Skamania County, Washington, in the Pacific Northwest region of the United States. It is south of Seattle, Washington and northeast of Portland, Oregon. Mount St. Helens takes its English name from the British diplomat Lord St Helens, a...
, hundreds of steam explosions preceded a 1980 plinian eruption
Plinian eruption
Plinian eruptions, also known as 'Vesuvian eruptions', are volcanic eruptions marked by their similarity to the eruption of Mount Vesuvius in AD 79 ....
of the volcano
Volcano
2. Bedrock3. Conduit 4. Base5. Sill6. Dike7. Layers of ash emitted by the volcano8. Flank| 9. Layers of lava emitted by the volcano10. Throat11. Parasitic cone12. Lava flow13. Vent14. Crater15...
. A less intense geothermal event may result in a mud volcano
Mud volcano
The term mud volcano or mud dome are used to refer to formations created by geo-excreted liquids and gases, although there are several different processes which may cause such activity. Hot water mixes with mud and surface deposits. Mud volcanoes are associated with subduction zones and about 700...
. In 1949, Thomas Jaggar
Thomas Jaggar
Thomas Augustus Jaggar, Jr. was an American volcanologist. He founded the Hawaiian Volcano Observatory and directed it from 1912 to 1940.-Biography:...
described this type of activity as a steam-blast eruption.

Phreatic
Phreatic
The term phreatic is used in Earth sciences to refer to matters relating to ground water below the water table . The term 'phreatic surface' indicates the location where the pore water pressure is under atmospheric conditions...
eruptions typically include steam and rock fragments; the inclusion of lava is unusual. The temperature of the fragments can range from cold to incandescent. If molten material is included, the term phreato-magmatic
Phreatomagmatic eruption
Phreatomagmatic eruptions are defined as juvenile forming eruptions as a result of interaction between water and magma. They are different from magmatic and phreatic eruptions. The products of phreatomagmatic eruptions contain juvenile clasts, unlike phreatic eruptions, and are the result of...
may be used. These eruptions occasionally create broad, low-relief crater
Volcanic crater
A volcanic crater is a circular depression in the ground caused by volcanic activity. It is typically a basin, circular in form within which occurs a vent from which magma erupts as gases, lava, and ejecta. A crater can be of large dimensions, and sometimes of great depth...
s called maar
Maar
A maar is a broad, low-relief volcanic crater that is caused by a phreatomagmatic eruption, an explosion caused by groundwater coming into contact with hot lava or magma. A maar characteristically fills with water to form a relatively shallow crater lake. The name comes from the local Moselle...
s. Phreatic explosions can be accompanied by carbon dioxide
Carbon dioxide
Carbon dioxide is a naturally occurring chemical compound composed of two oxygen atoms covalently bonded to a single carbon atom...
or hydrogen sulfide
Hydrogen sulfide
Hydrogen sulfide is the chemical compound with the formula . It is a colorless, very poisonous, flammable gas with the characteristic foul odor of expired eggs perceptible at concentrations as low as 0.00047 parts per million...
gas emissions. The former can asphyxiate
Asphyxia
Asphyxia or asphyxiation is a condition of severely deficient supply of oxygen to the body that arises from being unable to breathe normally. An example of asphyxia is choking. Asphyxia causes generalized hypoxia, which primarily affects the tissues and organs...
at sufficient concentration; the latter is a broad spectrum poison. A 1979 phreatic eruption on the island of Java killed 142 people, most of whom were overcome by poisonous gases.

It is believed that the 1883 eruption of Krakatoa
1883 eruption of Krakatoa
The 1883 eruption of Krakatoa began in May 1883 and culminated with the destruction of Krakatoa on 27 August 1883. Minor seismic activity continued to be reported until February 1884, though reports after October 1883 were later dismissed by Rogier Verbeek's investigation.-Early phase:In the years...
, which obliterated most of the volcanic island and created the loudest sound in recorded history, was a phreatic event. Kilauea
Kilauea
Kīlauea is a volcano in the Hawaiian Islands, and one of five shield volcanoes that together form the island of Hawaii. Kīlauea means "spewing" or "much spreading" in the Hawaiian language, referring to its frequent outpouring of lava. The Puu Ōō cone has been continuously erupting in the eastern...
, in Hawaii
Hawaii
Hawaii is the newest of the 50 U.S. states , and is the only U.S. state made up entirely of islands. It is the northernmost island group in Polynesia, occupying most of an archipelago in the central Pacific Ocean, southwest of the continental United States, southeast of Japan, and northeast of...
, has a long record of phreatic explosions; a 1924 phreatic eruption hurled rocks estimated at eight tons up to a distance of one kilometer. Additional examples are the 1963–65 eruption of Surtsey
Surtsey
Surtsey is a volcanic island off the southern coast of Iceland. At it is also the southernmost point of Iceland. It was formed in a volcanic eruption which began 130 metres below sea level, and reached the surface on 15 November 1963. The eruption lasted until 5 June 1967, when the island...
, the 1965 eruption of Taal Volcano
Taal Volcano
Taal Volcano is a complex volcano located on the island of Luzon in the Philippines. Historical eruptions are concentrated on Volcano Island, an island near the middle of Lake Taal. The lake partially fills Taal Caldera, which was formed by powerful prehistoric eruptions between 140,000 to 5,380 BP...
, and the 1982 Mount Tarumae
Mount Tarumae
is located in the Shikotsu-Toya National Park in Hokkaidō, Japan. It is located near both Tomakomai and Chitose towns and can be seen clearly from both. It is on the shores of Lake Shikotsu, a caldera lake. Tarumae is a 1,041 metre active andesitic stratovolcano, with a lava dome.-Eruptions:The...
eruption.
The source of this article is wikipedia, the free encyclopedia.  The text of this article is licensed under the GFDL.