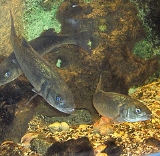 For other fish called "bass", see bass (fish)
Bass (fish)
Bass is a name shared by many different species of popular gamefish. The term encompasses both freshwater and marine species. All belong to the large order Perciformes, or perch-like fishes, and in fact the word bass comes from Middle English bars, meaning "perch."-Types of basses:*The temperate...
.

The European seabass, Dicentrarchus labrax, also known as Morone labrax, is a primarily ocean-going fish that sometimes enters brackish and fresh water
Fresh Water
Fresh Water is the debut album by Australian rock and blues singer Alison McCallum, released in 1972. Rare for an Australian artist at the time, it came in a gatefold sleeve...
s. It is also known as the sea dace. Highly regarded as a food fish, it is often marketed as Mediterranean seabass, bronzini or branzini (branzino is the name of the fish in Northern Italy
Italy
Italy , officially the Italian Republic languages]] under the European Charter for Regional or Minority Languages. In each of these, Italy's official name is as follows:;;;;;;;;), is a unitary parliamentary republic in South-Central Europe. To the north it borders France, Switzerland, Austria and...
; in other parts of Italy, it is called spigola or ragno). In Spain, where, due to its popularity, it is farmed
Fish farming
Fish farming is the principal form of aquaculture, while other methods may fall under mariculture. Fish farming involves raising fish commercially in tanks or enclosures, usually for food. A facility that releases young fish into the wild for recreational fishing or to supplement a species'...
, it is called lubina or róbalo, and in France bar commun.

The European bass is a member of the Moronidae
Moronidae
Temperate Bass is in the Family PercichthyidaeHow to know the freshwater fishes Samuel Eddy, James C. Underhill.Moronidae, also known as the "temperate basses", is a family of perciform fish consisting of 6 freshwater and marine species...
family. The name Dicentrarchus derives from the presence of two dorsal fins. It has silver sides and a white belly. Juvenile fish maintain black spots on the back and sides, a feature that can create confusion with Dicentrarchus punctatus
Dicentrarchus punctatus
The spotted seabass, Dicentrarchus punctatus, is a fish from the seabass family, living in brackish or pelagic-neritic waters, at depth below 30m, in subtropical areas.-References :*...
. This fish's operculum
Operculum (fish)
The operculum of a bony fish is the hard bony flap covering and protecting the gills. In most fish, the rear edge of the operculum roughly marks the division between the head and the body....
is serrated and spined. It can grow to a total length
Fish measurement
Fish measurement refers to the measuring of the length of individual fish and of various parts of their anatomy. These data are used in many areas of ichthyology, including taxonomy and fisheries biology.-Overall length:...
of over 1 m (3.3 ft) and 15 kg of weight.

Its habitats include estuaries
Estuary
An estuary is a partly enclosed coastal body of water with one or more rivers or streams flowing into it, and with a free connection to the open sea....
, lagoon
Lagoon
A lagoon is a body of shallow sea water or brackish water separated from the sea by some form of barrier. The EU's habitat directive defines lagoons as "expanses of shallow coastal salt water, of varying salinity or water volume, wholly or partially separated from the sea by sand banks or shingle,...
s, coastal waters and rivers. It is found in the waters in and around Europe
Europe
Europe is, by convention, one of the world's seven continents. Comprising the westernmost peninsula of Eurasia, Europe is generally 'divided' from Asia to its east by the watershed divides of the Ural and Caucasus Mountains, the Ural River, the Caspian and Black Seas, and the waterways connecting...
, including the eastern Atlantic Ocean
Atlantic Ocean
The Atlantic Ocean is the second-largest of the world's oceanic divisions. With a total area of about , it covers approximately 20% of the Earth's surface and about 26% of its water surface area...
(from Norway
Norway
Norway , officially the Kingdom of Norway, is a Nordic unitary constitutional monarchy whose territory comprises the western portion of the Scandinavian Peninsula, Jan Mayen, and the Arctic archipelago of Svalbard and Bouvet Island. Norway has a total area of and a population of about 4.9 million...
to Senegal
Senegal
Senegal , officially the Republic of Senegal , is a country in western Africa. It owes its name to the Sénégal River that borders it to the east and north...
), the Mediterranean Sea
Mediterranean Sea
The Mediterranean Sea is a sea connected to the Atlantic Ocean surrounded by the Mediterranean region and almost completely enclosed by land: on the north by Anatolia and Europe, on the south by North Africa, and on the east by the Levant...
and the Black Sea
Black Sea
The Black Sea is bounded by Europe, Anatolia and the Caucasus and is ultimately connected to the Atlantic Ocean via the Mediterranean and the Aegean seas and various straits. The Bosphorus strait connects it to the Sea of Marmara, and the strait of the Dardanelles connects that sea to the Aegean...
.

It is mostly a night hunter, feeding on small fish, polychaete
Polychaete
The Polychaeta or polychaetes are a class of annelid worms, generally marine. Each body segment has a pair of fleshy protrusions called parapodia that bear many bristles, called chaetae, which are made of chitin. Indeed, polychaetes are sometimes referred to as bristle worms. More than 10,000...
s, cephalopod
Cephalopod
A cephalopod is any member of the molluscan class Cephalopoda . These exclusively marine animals are characterized by bilateral body symmetry, a prominent head, and a set of arms or tentacles modified from the primitive molluscan foot...
s and crustacean
Crustacean
Crustaceans form a very large group of arthropods, usually treated as a subphylum, which includes such familiar animals as crabs, lobsters, crayfish, shrimp, krill and barnacles. The 50,000 described species range in size from Stygotantulus stocki at , to the Japanese spider crab with a leg span...
s.

The fish has come under increasing pressure from commercial fishing and has recently become the focus in the United Kingdom
United Kingdom
The United Kingdom of Great Britain and Northern IrelandIn the United Kingdom and Dependencies, other languages have been officially recognised as legitimate autochthonous languages under the European Charter for Regional or Minority Languages...
of a conservation
Conservation movement
The conservation movement, also known as nature conservation, is a political, environmental and a social movement that seeks to protect natural resources including animal, fungus and plant species as well as their habitat for the future....
effort by recreational anglers. In Italy the bass is the subject of intensive breeding in salt waters.

In the Republic of Ireland, there are strict laws regarding bass. All commercial fishing for the species is banned and there are several restrictions in place for recreational anglers, a closed season May 15- June 15 inclusive every year, a minimum size of 400mm, and a bag limit of two fish per day.

Debate has been ferocious in Britain in recent years as to the origin of the word "seabass". The traditional word was "bass" but that has changed with the recent popularity of cooking programmes and the expansion of restaurant marketing, both of which have adopted the phrase "seabass". There is only one type of bass in the British Isles and thus the expression "seabass" is probably unnecessary , although the Large Mouth (or Black) Bass indigenous to North America has been widely stocked in Southern Europe with significant breeding populations in many lakes and rivers in South Western France. Thus the distinction is valid in a European context.

In Greek
Greek language
Greek is an independent branch of the Indo-European family of languages. Native to the southern Balkans, it has the longest documented history of any Indo-European language, spanning 34 centuries of written records. Its writing system has been the Greek alphabet for the majority of its history;...
, the vernacular name of this fish, as well as that of the related Dicentrarchus punctatus
Dicentrarchus punctatus
The spotted seabass, Dicentrarchus punctatus, is a fish from the seabass family, living in brackish or pelagic-neritic waters, at depth below 30m, in subtropical areas.-References :*...
, is lavraki (λαβράκι). In Greek cuisine, the fish can be prepared in a variety of ways (e.g. grilled, steamed in parchment) and is often considered a delicacy. Greek journalists use the same word (lavraki) to refer to high-value exclusive news stories, a cultural reference to the perceived luck of an angler when catching this fish.

European seabass was one of the first types of fish after salmon to be farmed commercially in Europe. The most important farming countries are Greece, Turkey, Italy, Spain, Croatia and Egypt. The annual production is some 60,000 tonnes and is increasing quickly.
The source of this article is wikipedia, the free encyclopedia.  The text of this article is licensed under the GFDL.