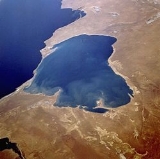 Encyclopedia
A lagoon is a body of shallow sea water or brackish water
Brackish water
Brackish water is water that has more salinity than fresh water, but not as much as seawater. It may result from mixing of seawater with fresh water, as in estuaries, or it may occur in brackish fossil aquifers. The word comes from the Middle Dutch root "brak," meaning "salty"...
separated from the sea
Sea
A sea generally refers to a large body of salt water, but the term is used in other contexts as well. Most commonly, it means a large expanse of saline water connected with an ocean, and is commonly used as a synonym for ocean...
by some form of barrier. The EU's habitat directive defines lagoons as "expanses of shallow coastal salt water, of varying salinity or water volume, wholly or partially separated from the sea by sand banks or shingle, or, less frequently, by rocks. Salinity may vary from brackish water to hypersalinity depending on rainfall, evaporation and through the addition of fresh seawater from storms, temporary flooding by the sea in winter or tidal exchange". 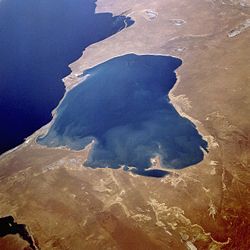 These applications of lagoon in English
English language
English is a West Germanic language that arose in the Anglo-Saxon kingdoms of England and spread into what was to become south-east Scotland under the influence of the Anglian medieval kingdom of Northumbria...
date from 1769. It adapted and extended the sense of the Venetian laguna
Venetian Lagoon
The Venetian Lagoon is the enclosed bay of the Adriatic Sea in which the city of Venice is situated. Its name in the Venetian language, Laguna Veneta— cognate of Latin lacus, "lake"— has provided the international name for an enclosed, shallow embayment of saltwater, a lagoon.The Venetian Lagoon...
(cf Latin lacuna, ‘empty space’), which specifically referred to Venice
Venice
Venice is a city in northern Italy which is renowned for the beauty of its setting, its architecture and its artworks. It is the capital of the Veneto region...
’s shallow, island-studded stretch of saltwater, protected from the Adriatic
Adriatic Sea
The Adriatic Sea is a body of water separating the Italian Peninsula from the Balkan peninsula, and the system of the Apennine Mountains from that of the Dinaric Alps and adjacent ranges...
by the barrier beaches
Bar (landform)
A shoal, sandbar , or gravelbar is a somewhat linear landform within or extending into a body of water, typically composed of sand, silt or small pebbles. A spit or sandspit is a type of shoal...
of the Lido. Lagoon refers to both coastal lagoons formed by the build-up of sandbanks or reefs along shallow coastal waters, and the lagoons in atolls formed by the growth of coral reefs on slowly sinking central islands. Lagoons that are fed by freshwater streams are also called estuaries
Estuary
An estuary is a partly enclosed coastal body of water with one or more rivers or streams flowing into it, and with a free connection to the open sea....
.

In Latin America often the use of “laguna”, which lagoon translates to, is used to describe a lake
Lake
A lake is a body of relatively still fresh or salt water of considerable size, localized in a basin, that is surrounded by land. Lakes are inland and not part of the ocean and therefore are distinct from lagoons, and are larger and deeper than ponds. Lakes can be contrasted with rivers or streams,...
, such as Laguna Catemaco
Laguna Catemaco
Laguna Catemaco is a freshwater lake located at the center of the Sierra de Los Tuxtlas in south central Veracruz, in east central Mexico. In English the word lagoon generally describes a body of water exposed to the sea. In Mexican Spanish laguna seems to be used to refer to lagoons plus lakes in...
.