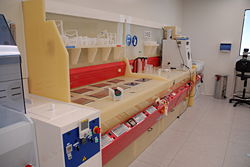 For many etch steps, part of the wafer is protected from the etchant by a "masking" material which resists etching. In some cases, the masking material is a photoresist
Photoresist
A photoresist is a light-sensitive material used in several industrial processes, such as photolithography and photoengraving to form a patterned coating on a surface.-Tone:Photoresists are classified into two groups: positive resists and negative resists....
which has been patterned using photolithography
Photolithography
Photolithography is a process used in microfabrication to selectively remove parts of a thin film or the bulk of a substrate. It uses light to transfer a geometric pattern from a photomask to a light-sensitive chemical "photoresist", or simply "resist," on the substrate...
. Other situations require a more durable mask, such as silicon nitride
Silicon nitride
Silicon nitride is a chemical compound of silicon and nitrogen. If powdered silicon is heated between 1300° and 1400°C in an atmosphere of nitrogen, trisilicon tetranitride, Si3N4, is formed. The silicon sample weight increases progressively due to the chemical combination of silicon and nitrogen...
.

If the etch is intended to make a cavity in a material, the depth of the cavity may be controlled approximately using the etching time and the known etch rate. More often, though, etching must entirely remove the top layer of a multilayer structure, without damaging the underlying or masking layers. The etching system's ability to do this depends on the ratio of etch rates in the two materials (selectivity).

Some etches undercut
Undercut (manufacturing)
In manufacturing, an undercut is a special type of recessed surface. In turning it refers to a recess in a diameter. In machining it refers to a recess in a corner. In molding it refers to a feature that cannot be molded using only a single pull mold...
the masking layer and form cavities with sloping sidewalls. The distance of undercutting is called bias. Etchants with large bias are called isotropic, because they erode the substrate equally in all directions. Modern processes greatly prefer anisotropic etches, because they produce sharp, well-controlled features.

The two fundamental types of etchants are liquid
Liquid
Liquid is one of the three classical states of matter . Like a gas, a liquid is able to flow and take the shape of a container. Some liquids resist compression, while others can be compressed. Unlike a gas, a liquid does not disperse to fill every space of a container, and maintains a fairly...
-phase ("wet") and plasma
Plasma (physics)
In physics and chemistry, plasma is a state of matter similar to gas in which a certain portion of the particles are ionized. Heating a gas may ionize its molecules or atoms , thus turning it into a plasma, which contains charged particles: positive ions and negative electrons or ions...
-phase ("dry"). Each of these exists in several varieties.

The first etching processes used liquid
Liquid
Liquid is one of the three classical states of matter . Like a gas, a liquid is able to flow and take the shape of a container. Some liquids resist compression, while others can be compressed. Unlike a gas, a liquid does not disperse to fill every space of a container, and maintains a fairly...
-phase ("wet") etchants. The wafer can be immersed in a bath of etchant, which must be agitated to achieve good process control. For instance, buffered hydrofluoric acid
Buffered oxide etch
Buffered oxide etch , also known as buffered HF or BHF, is a wet etchant used in microfabrication. Its primary use is in etching thin films of silicon dioxide or silicon nitride . It is a mixture of a buffering agent, such as ammonium fluoride , and hydrofluoric acid...
(BHF) is used commonly to etch silicon dioxide
Silicon dioxide
The chemical compound silicon dioxide, also known as silica , is an oxide of silicon with the chemical formula '. It has been known for its hardness since antiquity...
over a silicon
Silicon
Silicon is a chemical element with the symbol Si and atomic number 14. A tetravalent metalloid, it is less reactive than its chemical analog carbon, the nonmetal directly above it in the periodic table, but more reactive than germanium, the metalloid directly below it in the table...
substrate.

Different specialised etchants can be used to characterise the surface etched.

Wet etchants are usually isotropic, which leads to large bias when etching thick films. They also require the disposal of large amounts of toxic waste. For these reasons, they are seldom used in state-of-the-art processes. However, the photographic developer
Photographic developer
In the processing of photographic films, plates or papers, the photographic developer is a chemical that makes the latent image on the film or print visible. It does this by reducing the silver halides that have been exposed to light to elemental silver in the gelatine matrix...
used for photoresist
Photoresist
A photoresist is a light-sensitive material used in several industrial processes, such as photolithography and photoengraving to form a patterned coating on a surface.-Tone:Photoresists are classified into two groups: positive resists and negative resists....
resembles wet etching.

As an alternative to immersion, single wafer machines use the Bernoulli principle to employ a gas (usually, pure nitrogen
Nitrogen
Nitrogen is a chemical element that has the symbol N, atomic number of 7 and atomic mass 14.00674 u. Elemental nitrogen is a colorless, odorless, tasteless, and mostly inert diatomic gas at standard conditions, constituting 78.08% by volume of Earth's atmosphere...
) to cushion and protect one side of the wafer while etchant is applied to the other side. It can be done to either the front side or back side. The etch chemistry is dispensed on the top side when in the machine and the bottom side is not affected. This etch method is particularly effective just before "backend" processing (BEOL
BEOL
Back-end-of-line denotes the second portion of IC fabrication where the individual devices get interconnected with wiring on the wafer. BEOL generally begins when the first layer of metal is deposited on the wafer...
), where wafers are normally very much thinner after wafer backgrinding
Wafer backgrinding
Wafer backgrinding is a semiconductor device fabrication step during which wafer thickness is reduced to allow for stacking and high density packaging of integrated circuits ....
, and very sensitive to thermal or mechanical stress. Etching a thin layer of even a few micrometres will remove microcracks produced during backgrinding resulting in the wafer having dramatically increased strength and flexibility without breaking.

Some wet etchants etch crystal
Crystal
A crystal or crystalline solid is a solid material whose constituent atoms, molecules, or ions are arranged in an orderly repeating pattern extending in all three spatial dimensions. The scientific study of crystals and crystal formation is known as crystallography...
line materials at very different rates depending upon which crystal face is exposed. In single-crystal materials (e.g. silicon wafers), this effect can allow very high anisotropy, as shown in the figure.

Several anisotropic wet etchants are available for silicon, all of them hot aqueous caustics. For instance, potassium hydroxide
Potassium hydroxide
Potassium hydroxide is an inorganic compound with the formula KOH, commonly called caustic potash.Along with sodium hydroxide , this colorless solid is a prototypical strong base. It has many industrial and niche applications. Most applications exploit its reactivity toward acids and its corrosive...
(KOH) displays an etch rate selectivity 400 times higher in <100> crystal directions than in <111> directions. EDP (an aqueous solution of ethylene diamine
Ethylene diamine
Ethylenediamine is the organic compound with the formula C2H42. This colorless liquid with an ammonia-like odor is a strongly basic amine. The liquid fumes upon contact with humid air...
and pyrocatechol
Pyrocatechol
Catechol, also known as pyrocatechol or 1,2-dihydroxybenzene, is an organic compound with the molecular formula C6H42. It is the ortho isomer of the three isomeric benzenediols. This colourless compound occurs naturally in trace amounts...
), displays a <100>/<111> selectivity of 17X, does not etch silicon dioxide as KOH does, and also displays high selectivity between lightly doped and heavily boron-doped (p-type) silicon. Use of these etchants on wafers that already contain CMOS
CMOS
Complementary metal–oxide–semiconductor is a technology for constructing integrated circuits. CMOS technology is used in microprocessors, microcontrollers, static RAM, and other digital logic circuits...
integrated circuit
Integrated circuit
An integrated circuit or monolithic integrated circuit is an electronic circuit manufactured by the patterned diffusion of trace elements into the surface of a thin substrate of semiconductor material...
s requires protecting the circuitry, for example using the Protek films recently introduced by Brewer Science. KOH may introduce mobile potassium
Potassium
Potassium is the chemical element with the symbol K and atomic number 19. Elemental potassium is a soft silvery-white alkali metal that oxidizes rapidly in air and is very reactive with water, generating sufficient heat to ignite the hydrogen emitted in the reaction.Potassium and sodium are...
ions into silicon dioxide
Silicon dioxide
The chemical compound silicon dioxide, also known as silica , is an oxide of silicon with the chemical formula '. It has been known for its hardness since antiquity...
, and EDP is highly corrosive
Corrosive
A corrosive substance is one that will destroy or irreversibly damage another surface or substance with which it comes into contact. The main hazards to people include damage to the eyes, the skin, and the tissue under the skin; inhalation or ingestion of a corrosive substance can damage the...
and carcinogenic, so care is required in their use. Tetramethylammonium hydroxide
Tetramethylammonium hydroxide
Tetramethylammonium hydroxide is a quaternary ammonium salt with the molecular formula 4NOH. It is used as an anisotropic etchant of silicon. It is also used as a basic solvent in the development of acidic photoresist in the photolithography process. Since it is a phase transfer catalyst, it is...
(TMAH) presents a safer alternative than EDP, with a 37X selectivity between <100> and <111> planes in silicon.

If the etching is continued "to completion", i.e. until the flat bottom disappears, the pit becomes a trench with a V-shaped cross section. If the original rectangle was a perfect square, the pit when etched to completion displays a pyramidal shape.

The undercut, δ, under an edge of the masking material is given by:

where Rxxx is the etch rate in the