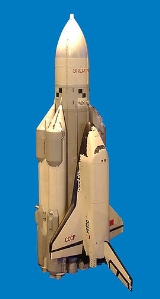 Encyclopedia
Energia was a Soviet
Soviet Union
The Soviet Union , officially the Union of Soviet Socialist Republics , was a constitutionally socialist state that existed in Eurasia between 1922 and 1991....
rocket that was designed by NPO Energia to serve as a heavy-lift expendable launch system
Expendable launch system
An expendable launch system is a launch system that uses an expendable launch vehicle to carry a payload into space. The vehicles used in expendable launch systems are designed to be used only once , and their components are not recovered for re-use after launch...
as well as a booster for the Buran spacecraft. Control system main developer enterprise was the NPO "Electropribor"
Khartron
JSC "Khartron" is a one of the leading design engineering bureaus of CIS , which develops and produces spacecraft control systems.- History and achievements :Khartron Corp...
. The Energia used four strap-on
Strap-on
Strap-on can be used to describe more than one thing:* Strap-on booster, a rocket motor which is used and then discarded* Strap-on dildo, a sex toy...
boosters powered by a four-chamber RD-170 engine burning with kerosene
Kerosene
Kerosene, sometimes spelled kerosine in scientific and industrial usage, also known as paraffin or paraffin oil in the United Kingdom, Hong Kong, Ireland and South Africa, is a combustible hydrocarbon liquid. The name is derived from Greek keros...
/LOX
Liquid oxygen
Liquid oxygen — abbreviated LOx, LOX or Lox in the aerospace, submarine and gas industries — is one of the physical forms of elemental oxygen.-Physical properties:...
, and a central core stage with 4 one-chamber RD-0120 (11D122) engines fueled with liquid hydrogen
Liquid hydrogen
Liquid hydrogen is the liquid state of the element hydrogen. Hydrogen is found naturally in the molecular H2 form.To exist as a liquid, H2 must be pressurized above and cooled below hydrogen's Critical point. However, for hydrogen to be in a full liquid state without boiling off, it needs to be...
/LOX.

The launch system had two functionally different operational variants: Energia-Polyus, the initial test configuration, in which the Polyus system was used as a final stage to put the payload into orbit, and Energia-Buran, in which the Buran spacecraft was the payload and the source of the orbit insertion impulse.

The rocket had the capacity to place about 100 metric tons in Low Earth orbit
Low Earth orbit
A low Earth orbit is generally defined as an orbit within the locus extending from the Earth’s surface up to an altitude of 2,000 km...
, up to 20 t
Tonne
The tonne, known as the metric ton in the US , often put pleonastically as "metric tonne" to avoid confusion with ton, is a metric system unit of mass equal to 1000 kilograms. The tonne is not an International System of Units unit, but is accepted for use with the SI...
to the geostationary orbit
Geostationary orbit
A geostationary orbit is a geosynchronous orbit directly above the Earth's equator , with a period equal to the Earth's rotational period and an orbital eccentricity of approximately zero. An object in a geostationary orbit appears motionless, at a fixed position in the sky, to ground observers...
and up to 32 t to the lunar mission trajectory
Lunar orbit
In astronomy, lunar orbit refers to the orbit of an object around the Moon.As used in the space program, this refers not to the orbit of the Moon about the Earth, but to orbits by various manned or unmanned spacecraft around the Moon...
.

Work on the Energia/Buran system began in 1976 after the decision was made to cancel the unsuccessful N1 rocket
N1 rocket
N-1 was a heavy lift rocket intended to deliver payloads beyond low Earth orbit, acting as the Soviet counterpart to the NASA Saturn V rocket. This heavy lift booster had the capability of lifting very heavy loads into orbit, designed with manned extra-orbital travel in mind...
. The cancelled N1 rocket-based Manned Lunar Launch Facilities and Infrastructure were used for Energia (notably the huge horizontal assembly building), just as NASA reused infrastructure designed for the Saturn V
Saturn V
The Saturn V was an American human-rated expendable rocket used by NASA's Apollo and Skylab programs from 1967 until 1973. A multistage liquid-fueled launch vehicle, NASA launched 13 Saturn Vs from the Kennedy Space Center, Florida with no loss of crew or payload...
in the Space Shuttle program. Energia also replaced the "Vulkan" concept, which was a design based on the Proton rocket
Proton rocket
Proton is an expendable launch system used for both commercial and Russian government space launches. The first Proton rocket was launched in 1965 and the launch system is still in use as of 2011, which makes it one of the most successful heavy boosters in the history of spaceflight...
and using the same hypergolic fuels, but much larger and more powerful. The "Vulkan" designation was later given to a variation of the Energia which has eight boosters and multiple stages.

The Energia was designed to launch the Russian "Buran" reusable shuttle, and for that reason was designed to carry its payload mounted on the side of the stack, rather than on the top, as is done with other launch vehicles. After design of the Energia-Buran system, it was also proposed that the booster could be used without the Buran as a heavy-lift cargo launch vehicle; this configuration was originally given the name "Buran-T". This configuration required the addition of an upper stage to reach orbit. In fact, the first launch of the Energia was in the configuration of a heavy launch vehicles, with a large military satellite as a payload.

Due to the termination of the Buran program the Energia program was concluded after only two launches, and further the payload on the first launch didn't perform the final boost properly. The legacy of Energia/Buran project manifests itself most visibly in form of the RD-170 family of rocket engines, and the Zenit launcher, with the first stage roughly the same as one of the Energia first stage boosters.

The Energia was first test-launched on 15 May 1987, with the Polyus spacecraft as the payload. A FGB
Zarya
Zarya , also known as the Functional Cargo Block or FGB , was the first module of the International Space Station to be launched. The FGB provided electrical power, storage, propulsion, and guidance to the ISS during the initial stage of assembly...
("Functional Cargo Block") engine section originally built as a cancelled Mir
Mir
Mir was a space station operated in low Earth orbit from 1986 to 2001, at first by the Soviet Union and then by Russia. Assembled in orbit from 1986 to 1996, Mir was the first modular space station and had a greater mass than that of any previous spacecraft, holding the record for the...
module was incorporated into the upper stage used to inject the payload into orbit, similarly to modern geostationary satellites providing apogee impulse themselves, since the planned "Buran-T" upper stage had not yet progressed beyond the planning stage. The intended orbit was altitude 280 km (170 mi), inclination 64.6°.

The Soviets had originally announced that the launch as a successful sub-orbital test of the new Energia booster with a dummy payload, but some time later it was revealed that the flight had, in fact, been intended to orbit the Polyus, a UKSS military payload. The two stages of the Energia launcher functioned as designed, but the Polyus payload failed to reach orbit. Due to a software error in its attitude control system, the burn of the Polyus' orbital insertion motor failed to insert the payload into orbit. Instead, the payload reentered the atmosphere over the Pacific ocean.

The second flight, and the first one where payload successfully reached orbit, was launched on 15 November 1988. This mission launched the unmanned Soviet Shuttle vehicle, Buran. At apogee, the Buran spacecraft made a 66.7 m/s burn to reach a final orbit of 251 km x 263 km. Both the Energia and Buran programs were designed to maintain strategic parity with the United States.

Production of Energia rockets ended with the fall of the Soviet Union and the end of the Buran shuttle project. Ever since, there have been persistent rumors of the renewal of production, but given the current political realities, that is highly unlikely. While the Energia is no longer in production, the Zenit boosters are still in production and in use. The four strap-on liquid-fuel boosters
Liquid Rocket Booster
A Liquid Rocket Booster is similar to a solid rocket booster attached to the side of a rocket to give it extra lift at takeoff. A Liquid Rocket Booster has fuel and oxidiser in liquid form, as opposed to a solid rocket or hybrid rocket....
, which burned kerosene and liquid oxygen, were the basis of the Zenit rocket which used the same engines. The engine is the RD-170, a powerful, modern, and efficient design. Its derivative, the RD-171, is still used on the Zenit rocket
Zenit rocket
Zenit is a family of space launch vehicles designed by the Yuzhnoye Design Bureau of Ukraine. Zenit was built in the 1980s for two purposes: as a liquid rocket booster for the Energia rocket and, equipped with a second stage, as a stand-alone rocket...
. A half-sized derivative of the engine, the RD-180, powers Lockheed Martin
Lockheed Martin
Lockheed Martin is an American global aerospace, defense, security, and advanced technology company with worldwide interests. It was formed by the merger of Lockheed Corporation with Martin Marietta in March 1995. It is headquartered in Bethesda, Maryland, in the Washington Metropolitan Area....
's Atlas V rocket. The quarter size derivative of the engine, the RD-191, has been used to launch Korean Naro-1 rocket and is to be used in the Russian Angara rocket.

Three major variants were planned after the original configuration, each with vastly different payloads.

The Energia M was the smallest design configuration. The number of Zenit boosters
Zenit rocket
Zenit is a family of space launch vehicles designed by the Yuzhnoye Design Bureau of Ukraine. Zenit was built in the 1980s for two purposes: as a liquid rocket booster for the Energia rocket and, equipped with a second stage, as a stand-alone rocket...
was reduced from four to two, and instead of four RD-0120 engines in the core, it had only one. It was designed to replace the Proton rocket, but lost the 1993 competition to the Angara rocket
Angara rocket
The Angara rocket family is a family of space-launch vehicles currently under development by the Moscow-based Khrunichev State Research and Production Space Center...
.

Energia II, named Uragan , was a rocket planned to be fully reusable and would have been able to land on a conventional airfield. Unlike the Energia, which was planned to be semi-reusable (like that of the U.S. Space Shuttle
Space Shuttle
The Space Shuttle was a manned orbital rocket and spacecraft system operated by NASA on 135 missions from 1981 to 2011. The system combined rocket launch, orbital spacecraft, and re-entry spaceplane with modular add-ons...
), the Uragan design would have allowed the complete recovery of all Buran/Energia elements, like that of the original totally reusable Orbiter/Booster concept of the U.S. Shuttle. The Energia II core as proposed would be capable of re-entering and gliding to a landing, presumably using technology developed for the Buran.

The final unflown configuration was also the largest. With eight Zenit booster rockets and an Energia-M core as the upper stage, the "Vulkan" (which was the same name of another Soviet heavy lift rocket that was cancelled years earlier) or "Hercules" (which is the same name designated to the N-1 rockets) configuration could have launched up to 175 tonnes into orbit.

The development of rocket-carrier "Vulcan" and the refurbishment of the "Energia" launch pad for its launches was in progress in 1990-1993. But later on the work on this project was cancelled due to lack of funds and the collapse of Soviet Union.