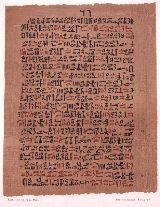 Egyptian belongs to the Afroasiatic language phylum, also known as the Hamito-Semitic or Semito-Hamitic phylum. Among the typological features of Egyptian that are typically Afroasiatic are: a fusional morphology, consonantal lexical roots
Nonconcatenative morphology
Nonconcatenative morphology, also called discontinuous morphology and introflection, is a form of word formation in which the root is modified and which does not involve stringing morphemes together...
, a series of emphatic consonant
Emphatic consonant
Emphatic consonant is a term widely used in Semitic linguistics to describe one of a series of obstruent consonants which originally contrasted with series of both voiced and voiceless obstruents. In specific Semitic languages, the members of this series may be realized as pharyngealized,...
s, a three-vowel system /a i u/, nominal feminine suffix *-at, nominal m-, adjectival *-ī, and characteristic personal verbal affixes. Of the language families included in the Afroasiatic phylum, Egyptian shows the most affinities to the Cushitic
Cushitic languages
The Cushitic languages are a branch of the Afroasiatic language family spoken in the Horn of Africa, Tanzania, Kenya, Sudan and Egypt. They are named after the Biblical character Cush, who was identified as an ancestor of the speakers of these specific languages as early as AD 947...
, Semitic
Semitic languages
The Semitic languages are a group of related languages whose living representatives are spoken by more than 270 million people across much of the Middle East, North Africa and the Horn of Africa...
, and Berber
Berber languages
The Berber languages are a family of languages indigenous to North Africa, spoken from Siwa Oasis in Egypt to Morocco , and south to the countries of the Sahara Desert...
families.