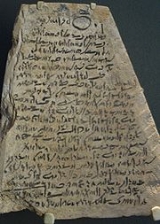 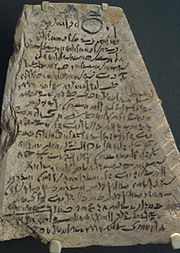 Middle Demotic (c. 400–30 BC) is the stage of writing used during the Ptolemaic Period
Ptolemaic dynasty
The Ptolemaic dynasty, was a Macedonian Greek royal family which ruled the Ptolemaic Empire in Egypt during the Hellenistic period. Their rule lasted for 275 years, from 305 BC to 30 BC...
. From the 4th century BC onwards, Demotic held a higher status, as may be seen from its increasing use for literary and religious texts. By the end of the 3rd century BC, Greek
Ancient Greek
Ancient Greek is the stage of the Greek language in the periods spanning the times c. 9th–6th centuries BC, , c. 5th–4th centuries BC , and the c. 3rd century BC – 6th century AD of ancient Greece and the ancient world; being predated in the 2nd millennium BC by Mycenaean Greek...
was more important as it was the administrative language of the country; Demotic contracts lost most of their legal force unless there was a note in Greek of being registered with the authorities.

From the beginning of Roman rule of Egypt, Demotic was progressively less used in public life. There are, however, a number of literary texts written in Late Demotic (c. 30 BC–452 AD), especially from the 1st and 2nd centuries AD, though the quantity of all Demotic texts decreased rapidly towards the end of the 2nd century. In contrast to the way Latin eliminated minority languages in the western part of the Empire and the expansion of Greek led to the extinction of Phrygian, Greek did not replace Demotic entirely. After that, Demotic was only used for a few ostraca
Ostracon
An ostracon is a piece of pottery , usually broken off from a vase or other earthenware vessel. In archaeology, ostraca may contain scratched-in words or other forms of writing which may give clues as to the time when the piece was in use...
, subscriptions to Greek texts, mummy labels, and graffiti. The last dated example of the Demotic script is dated to December 11, AD. 452, and consists of a graffito on the walls of the temple of Isis
Isis
Isis or in original more likely Aset is a goddess in Ancient Egyptian religious beliefs, whose worship spread throughout the Greco-Roman world. She was worshipped as the ideal mother and wife as well as the matron of nature and magic...
on Philae
Philae
Philae is an island in the Nile River and the previous site of an Ancient Egyptian temple complex in southern Egypt...
.

Demotic is a development of Late Egyptian
Late Egyptian
Late Egyptian is the stage of the Egyptian language that was written by the time of the New Kingdom around 1350 BC – the Amarna period. Texts written wholly in Late Egyptian date to the Ramesside Period and later...
and shares much with the later Coptic
Coptic language
Coptic or Coptic Egyptian is the current stage of the Egyptian language, a northern Afro-Asiatic language spoken in Egypt until at least the 17th century. Egyptian began to be written using the Greek alphabet in the 1st century...
phase of the Egyptian language. In the earlier stages of Demotic, such as those texts written in the Early Demotic script, it probably represented the spoken idiom of the time. But, as it was increasingly used for only literary and religious purposes, the written language diverged more and more from the spoken form, giving Late Demotic texts an artificial character, similar to the use of classical Middle Egyptian during the Ptolemaic Period.

Demotic is the second script inscribed on the Rosetta Stone
Rosetta Stone
The Rosetta Stone is an ancient Egyptian granodiorite stele inscribed with a decree issued at Memphis in 196 BC on behalf of King Ptolemy V. The decree appears in three scripts: the upper text is Ancient Egyptian hieroglyphs, the middle portion Demotic script, and the lowest Ancient Greek...
. There are 32 lines of Demotic script on the Rosetta Stone. Demotic was deciphered before the hieroglyphic script, starting with the efforts of Silvestre de Sacy
Silvestre de Sacy
Antoine Isaac, Baron Silvestre de Sacy , was a French linguist and orientalist. His son, Ustazade Silvestre de Sacy, became a journalist.-Early life:...
. The Rosetta Stone was discovered in 1799. It was inscribed in classical Greek and Egyptian (demotic and hieroglyphic). By comparing the Greek words, which could be translated, and the Egyptian hieroglyphs, in addition to their knowledge of Coptic, scholars were able to translate Egyptian glyph
Glyph
A glyph is an element of writing: an individual mark on a written medium that contributes to the meaning of what is written. A glyph is made up of one or more graphemes....
s. Egyptologists, linguists
Linguistics
Linguistics is the scientific study of human language. Linguistics can be broadly broken into three categories or subfields of study: language form, language meaning, and language in context....
and papyrologist
Papyrology
Papyrology is the study of ancient literature, correspondence, legal archives, etc., as preserved in manuscripts written on papyrus, the most common form of writing material in the ancient civilizations of Egypt, Greece, and Rome...
s specializing in the study of the Demotic script and stage of Egyptian are known as Demotists.