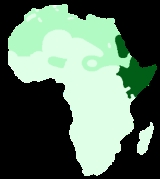 Encyclopedia
The Cushitic languages are a branch of the Afroasiatic language family spoken in the Horn of Africa
Horn of Africa
The Horn of Africa is a peninsula in East Africa that juts hundreds of kilometers into the Arabian Sea and lies along the southern side of the Gulf of Aden. It is the easternmost projection of the African continent...
, Tanzania
Tanzania
The United Republic of Tanzania is a country in East Africa bordered by Kenya and Uganda to the north, Rwanda, Burundi, and the Democratic Republic of the Congo to the west, and Zambia, Malawi, and Mozambique to the south. The country's eastern borders lie on the Indian Ocean.Tanzania is a state...
, Kenya
Kenya
Kenya , officially known as the Republic of Kenya, is a country in East Africa that lies on the equator, with the Indian Ocean to its south-east...
, Sudan
Sudan
Sudan , officially the Republic of the Sudan , is a country in North Africa, sometimes considered part of the Middle East politically. It is bordered by Egypt to the north, the Red Sea to the northeast, Eritrea and Ethiopia to the east, South Sudan to the south, the Central African Republic to the...
and Egypt
Egypt
Egypt , officially the Arab Republic of Egypt, Arabic: , is a country mainly in North Africa, with the Sinai Peninsula forming a land bridge in Southwest Asia. Egypt is thus a transcontinental country, and a major power in Africa, the Mediterranean Basin, the Middle East and the Muslim world...
. They are named after the Biblical character Cush, who was identified as an ancestor of the speakers of these specific languages as early as AD 947 (in Masudi's Arabic history Meadows of Gold). The most populous Cushitic language is Oromo
Oromo language
Oromo, also known as Afaan Oromo, Oromiffa, Afan Boran, Afan Orma, and sometimes in other languages by variant spellings of these names , is an Afro-Asiatic language, and the most widely spoken of the Cushitic family. Forms of Oromo are spoken as a first language by more than 25 million Oromo and...
with about 35 million speakers, followed by Somali
Somali language
The Somali language is a member of the East Cushitic branch of the Afro-Asiatic language family. Its nearest relatives are Afar and Oromo. Somali is the best documented of the Cushitic languages, with academic studies beginning before 1900....
with about 18 million speakers, and Sidamo
Sidamo language
Sidamo is an Afro-Asiatic language, belonging to the Cushitic branch, part of the Highland East Cushitic group. It is spoken in parts of southern Ethiopia....
in Ethiopia with about 2 million speakers. Other languages with more than one million speakers are Hadia (1.6 million), Kambata
Kambaata language
Kambaata is a Highland East Cushitic language, part of the larger Afro-Asiatic family and spoken by the Kambaata. Dialects are Donga, Kambaata and Tambaro. It is one of the official languages of Ethiopia. The language has a large number of verbal affixes. When these are affixed to verbal roots,...
(1.4 million), and Afar
Afar language
Afar is a Lowland East Cushitic language spoken in Ethiopia, Eritrea and Djibouti. It is believed to have 1.5 million speakers, the Afar. The basic word order in Afar, like in other East Cushitic languages, is subject–object–verb. Its speakers have a literacy rate of between one and three per cent...
(1.5 million).

There are eight clearly valid groups of languages which are or have been included in the Cushitic family, and there is a wide range of opinions as to how they are interrelated.

Hetzron
Robert Hetzron
Robert Herzog sitting third from right]]Robert Hetzron, born Herzog , was a Hungarian-born linguist known for his work on the comparative study of Afro-Asiatic languages, as well as for his study of Cushitic and Ethiopian Semitic languages.-Biography:Born in Hungary, Hetzron studied at the...
(1980:70ff) and Ehret (1995) have suggested that the Rift languages (South Cushitic) are a part of Lowland East Cushitic.

Cushitic was traditionally seen as also including the Omotic languages
Omotic languages
The Omotic languages are a branch of the Afroasiatic family spoken in southwestern Ethiopia. The Ge'ez alphabet is used to write some Omotic languages, the Roman alphabet for some others. They are fairly agglutinative, and have complex tonal systems .-Language list:The North and South Omotic...
, then called West Cushitic. However, this view has largely been abandoned, primarily due to the work of Harold C. Fleming
Harold C. Fleming
Harold Crane Fleming is an American anthropologist and historical linguist, specializing in the cultures and languages of the Horn of Africa. As an adherent of the Four Field School of American anthropology, he stresses the integration of physical anthropology, linguistics, archaeology, and...
(1974) and M. Lionel Bender
Lionel Bender (linguist)
Marvin Lionel Bender was an American author and co-author of several books, publications and essays regarding African languages, particularly from Ethiopia and Sudan. He retired from Southern Illinois University Carbondale. He did extensive work in all four language families of Ethiopia: Semitic,...
(1975). These scholars consider Omotic to be an independent branch of Afroasiatic. While some scholars including Zaborski (1986) and Lamberti (1991) have kept the issue alive and suggested that Omotic can still be classified as part of Cushitic, Rolf Theil (2006), in keeping with the noted Chadicist Paul Newman, excludes Omotic from Afroasiatic altogether.