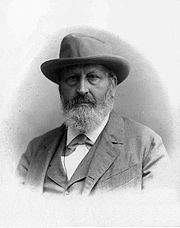 Eduard Suess was a geologist
Geologist
A geologist is a scientist who studies the solid and liquid matter that constitutes the Earth as well as the processes and history that has shaped it. Geologists usually engage in studying geology. Geologists, studying more of an applied science than a theoretical one, must approach Geology using...
who was an expert on the geography
Geography
Geography is the science that studies the lands, features, inhabitants, and phenomena of Earth. A literal translation would be "to describe or write about the Earth". The first person to use the word "geography" was Eratosthenes...
of the Alps
Alps
The Alps is one of the great mountain range systems of Europe, stretching from Austria and Slovenia in the east through Italy, Switzerland, Liechtenstein and Germany to France in the west....
. He is responsible for hypothesising two major former geographical features, the supercontinent
Supercontinent
In geology, a supercontinent is a landmass comprising more than one continental core, or craton. The assembly of cratons and accreted terranes that form Eurasia qualifies as a supercontinent today.-History:...
Gondwana
Gondwana
In paleogeography, Gondwana , originally Gondwanaland, was the southernmost of two supercontinents that later became parts of the Pangaea supercontinent. It existed from approximately 510 to 180 million years ago . Gondwana is believed to have sutured between ca. 570 and 510 Mya,...
(proposed 1861) and the Tethys Ocean
Tethys Ocean
The Tethys Ocean was an ocean that existed between the continents of Gondwana and Laurasia during the Mesozoic era before the opening of the Indian Ocean.-Modern theory:...
.

Born in London
London
London is the capital city of :England and the :United Kingdom, the largest metropolitan area in the United Kingdom, and the largest urban zone in the European Union by most measures. Located on the River Thames, London has been a major settlement for two millennia, its history going back to its...
to a Jewish Saxon
Saxony
The Free State of Saxony is a landlocked state of Germany, contingent with Brandenburg, Saxony Anhalt, Thuringia, Bavaria, the Czech Republic and Poland. It is the tenth-largest German state in area, with of Germany's sixteen states....
merchant, when he was three his family relocated to
Prague
Prague
Prague is the capital and largest city of the Czech Republic. Situated in the north-west of the country on the Vltava river, the city is home to about 1.3 million people, while its metropolitan area is estimated to have a population of over 2.3 million...
, then to Vienna
Vienna
Vienna is the capital and largest city of the Republic of Austria and one of the nine states of Austria. Vienna is Austria's primary city, with a population of about 1.723 million , and is by far the largest city in Austria, as well as its cultural, economic, and political centre...
when he was 14. Interested in geology
Geology
Geology is the science comprising the study of solid Earth, the rocks of which it is composed, and the processes by which it evolves. Geology gives insight into the history of the Earth, as it provides the primary evidence for plate tectonics, the evolutionary history of life, and past climates...
at a young age, he published his first paper (on the geology of Carlsbad
Karlovy Vary
Karlovy Vary is a spa city situated in western Bohemia, Czech Republic, on the confluence of the rivers Ohře and Teplá, approximately west of Prague . It is named after King of Bohemia and Holy Roman Emperor Charles IV, who founded the city in 1370...
, now in the Czech Republic
Czech Republic
The Czech Republic is a landlocked country in Central Europe. The country is bordered by Poland to the northeast, Slovakia to the east, Austria to the south, and Germany to the west and northwest....
) when he was 19.

By 1857 he was a professor of geology at the University of Vienna
University of Vienna
The University of Vienna is a public university located in Vienna, Austria. It was founded by Duke Rudolph IV in 1365 and is the oldest university in the German-speaking world...
, and from there he gradually developed views on the connection between Africa
Africa
Africa is the world's second largest and second most populous continent, after Asia. At about 30.2 million km² including adjacent islands, it covers 6% of the Earth's total surface area and 20.4% of the total land area...
and Europe
Europe
Europe is, by convention, one of the world's seven continents. Comprising the westernmost peninsula of Eurasia, Europe is generally 'divided' from Asia to its east by the watershed divides of the Ural and Caucasus Mountains, the Ural River, the Caspian and Black Seas, and the waterways connecting...
; eventually he came to the conclusion that the Alps to the north were once at the bottom of an ocean, of which the Mediterranean was a remnant. While not quite correct (mostly because plate tectonics
Plate tectonics
Plate tectonics is a scientific theory that describes the large scale motions of Earth's lithosphere...
had not yet been discovered — he used the earlier geosyncline theory), this is close enough to the truth that he is credited with postulating the earlier existence of the Tethys Ocean
Tethys Ocean
The Tethys Ocean was an ocean that existed between the continents of Gondwana and Laurasia during the Mesozoic era before the opening of the Indian Ocean.-Modern theory:...
, which he named in 1893.

In volume two of his massive, three-volume Das Antlitz der Erde Suess set out his belief that across geologic time, the rise and fall of sea levels were mappable across the earth, that is, that the periods of ocean transgression
Transgression (geology)
A marine transgression is a geologic event during which sea level rises relative to the land and the shoreline moves toward higher ground, resulting in flooding. Transgressions can be caused either by the land sinking or the ocean basins filling with water...
and regression
Marine regression
Marine regression is a geological process occurring when areas of submerged seafloor are exposed above the sea level. The opposite event, marine transgression, occurs when flooding from the sea covers previously exposed land....
were correlatable from one continent to another. Suess postulated that as sediments filled the ocean basins the sea levels gradually rose, and periodically there were events of rapid ocean bottom subsidence that increased the ocean's capacity and caused the regressions. This became known as the theory of eustasy (eustacy).

His other major theory involved glossopteris fern
Glossopteris
Glossopteris is the largest and best-known genus of the extinct order of seed ferns known as Glossopteridales ....
fossils occurring in South America
South America
South America is a continent situated in the Western Hemisphere, mostly in the Southern Hemisphere, with a relatively small portion in the Northern Hemisphere. The continent is also considered a subcontinent of the Americas. It is bordered on the west by the Pacific Ocean and on the north and east...
, Africa
Africa
Africa is the world's second largest and second most populous continent, after Asia. At about 30.2 million km² including adjacent islands, it covers 6% of the Earth's total surface area and 20.4% of the total land area...
, and India
India
India , officially the Republic of India , is a country in South Asia. It is the seventh-largest country by geographical area, the second-most populous country with over 1.2 billion people, and the most populous democracy in the world...
(as well as Antarctica, though Suess did not know this). His explanation was that the three lands were once connected in a supercontinent, which he named Gondwanaland. Again, this is not quite correct: Suess believed that the oceans flooded the spaces currently between those lands, when in fact the lands drifted apart. Still, it is so similar to what is currently believed that his naming has stuck.

Suess is considered one of the early practitioners of ecology. He published a comprehensive synthesis of his ideas in 1885-1901, entitled Das Antlitz der Erde (translated as "The Face of the Earth"), which was a popular textbook for many years. In this work Suess also introduced the concept of the biosphere
Biosphere
The biosphere is the global sum of all ecosystems. It can also be called the zone of life on Earth, a closed and self-regulating system...
, which was later extended by Vladimir I. Vernadsky in 1926.

"... one thing seems to be foreign on this large celestial body consisting of spheres, namely, organic life. But this life is limited to a determined zone at the surface of the lithosphere
Lithosphere
The lithosphere is the rigid outermost shell of a rocky planet. On Earth, it comprises the crust and the portion of the upper mantle that behaves elastically on time scales of thousands of years or greater.- Earth's lithosphere :...
. The plant, whose deep roots plunge into the soil to feed, and which at the same time rises into the air to breathe, is a good illustration of organic life in the region of interaction between the upper sphere and the lithosphere, and on the surface of continents it is possible to single out an independent biosphere" - Eduard Suess

The crater Suess
Suess (lunar crater)
Suess is a small lunar impact crater on the Oceanus Procellarum. It is a circular, cup-shaped feature with a higher albedo than the surroundings. The closest significant crater is Reiner, about 150 kilometers to the west-northwest...
on the Moon
Moon
The Moon is Earth's only known natural satellite,There are a number of near-Earth asteroids including 3753 Cruithne that are co-orbital with Earth: their orbits bring them close to Earth for periods of time but then alter in the long term . These are quasi-satellites and not true moons. For more...
and a crater
Impact crater
In the broadest sense, the term impact crater can be applied to any depression, natural or manmade, resulting from the high velocity impact of a projectile with a larger body...
on Mars
Mars
Mars is the fourth planet from the Sun in the Solar System. The planet is named after the Roman god of war, Mars. It is often described as the "Red Planet", as the iron oxide prevalent on its surface gives it a reddish appearance...
are named after him. His son, Franz Eduard Suess (1867–1942), was superintendent and geologist at the Imperial Geological Institute in Vienna.
The source of this article is wikipedia, the free encyclopedia.  The text of this article is licensed under the GFDL.