The planets circle around

which type of heat transfer is involved in lithospheric plater movement? How does this process move the plates from place to place?
More

True or false ? earths lithosphere is the rigid outer shell of the planet....
More 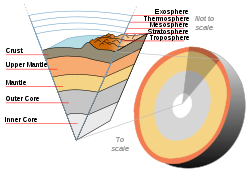 The lithosphere is the rigid outermost shell of a rocky planet
Planet
A planet is a celestial body orbiting a star or stellar remnant that is massive enough to be rounded by its own gravity, is not massive enough to cause thermonuclear fusion, and has cleared its neighbouring region of planetesimals.The term planet is ancient, with ties to history, science,...
. On Earth
Earth
Earth is the third planet from the Sun, and the densest and fifth-largest of the eight planets in the Solar System. It is also the largest of the Solar System's four terrestrial planets...
, it comprises the crust
Crust (geology)
In geology, the crust is the outermost solid shell of a rocky planet or natural satellite, which is chemically distinct from the underlying mantle...
and the portion of the upper mantle
Mantle (geology)
The mantle is a part of a terrestrial planet or other rocky body large enough to have differentiation by density. The interior of the Earth, similar to the other terrestrial planets, is chemically divided into layers. The mantle is a highly viscous layer between the crust and the outer core....
that behaves elastically on time scales of thousands of years or greater.

In the earth the lithosphere includes the crust
Crust (geology)
In geology, the crust is the outermost solid shell of a rocky planet or natural satellite, which is chemically distinct from the underlying mantle...
and the uppermost mantle
Mantle (geology)
The mantle is a part of a terrestrial planet or other rocky body large enough to have differentiation by density. The interior of the Earth, similar to the other terrestrial planets, is chemically divided into layers. The mantle is a highly viscous layer between the crust and the outer core....
, which constitute the hard and rigid outer layer of the Earth. The lithosphere is underlain by the asthenosphere
Asthenosphere
The asthenosphere is the highly viscous, mechanically weak and ductilely-deforming region of the upper mantle of the Earth...
, the weaker, hotter, and deeper part of the upper mantle. The boundary between the lithosphere and the underlying asthenosphere is defined by a difference in response to stress: the lithosphere remains rigid for very long periods of geologic time in which it deforms elastically and through brittle failure, while the asthenosphere deforms viscously and accommodates strain through plastic deformation. The lithosphere is broken into tectonic plates
Plate tectonics
Plate tectonics is a scientific theory that describes the large scale motions of Earth's lithosphere...
. The uppermost part of the lithosphere that chemically reacts to the atmosphere, hydrosphere and biosphere through the soil forming process is called the pedosphere
Pedosphere
The pedosphere is the outermost layer of the Earth that is composed of soil and subject to soil formation processes. It exists at the interface of the lithosphere, atmosphere, hydrosphere and biosphere. The sum total of all the organisms, soils, water and air is termed as the "pedosphere"...
.

The concept of the lithosphere as Earth’s strong outer layer was developed by Joseph Barrell
Joseph Barrell
Joseph Barrell was an American geologist who proposed that sedimentary rocks were produced by the action of rivers, winds, and ice , as well as by marine sedimentation. He also independently arrived at the theory of stoping as a mechanism for igneous intrusion...
, who wrote a series of papers introducing the concept. The concept was based on the presence of significant gravity anomalies over continental crust, from which he inferred that there must exist a strong upper layer (which he called the lithosphere) above a weaker layer which could flow (which he called the asthenosphere). These ideas were expanded by the Harvard geologist Reginald Aldworth Daly
Reginald Aldworth Daly
-External links:* Daly′s Biography, American Geophysical Union* GSA Today, vol. 16, no. 2, 2006* National Academy of Sciences, Washington, DC, 36 pp., 1960...
in 1940 with his seminal work, Strength and structure of the Earth and have been broadly accepted by geologists and geophysicists. Although these ideas about lithosphere and asthenosphere were developed long before plate tectonic theory was articulated in the 1960s, the concepts that a strong lithosphere exists and that this rests on a weak asthenosphere are essential to that theory.

The lithosphere provides a conductive lid atop the convecting mantle; as such, it affects heat transport through the Earth.

There are two types of lithosphere:

The thickness of the lithosphere is considered to be the depth to the isotherm associated with the transition between brittle and viscous behavior. The temperature at which olivine begins to deform viscously (~1000°C) is often used to set this isotherm because olivine
Olivine
The mineral olivine is a magnesium iron silicate with the formula 2SiO4. It is a common mineral in the Earth's subsurface but weathers quickly on the surface....
is generally the weakest mineral in the upper mantle. Oceanic lithosphere is typically about 50–100 km thick (but beneath the mid-ocean ridge
Mid-ocean ridge
A mid-ocean ridge is a general term for an underwater mountain system that consists of various mountain ranges , typically having a valley known as a rift running along its spine, formed by plate tectonics. This type of oceanic ridge is characteristic of what is known as an oceanic spreading...
s is no thicker than the crust), while continental lithosphere has a range in thickness from about 40 km to perhaps 200 km; the upper ~30 to ~50 km of typical continental lithosphere is crust
Crust (geology)
In geology, the crust is the outermost solid shell of a rocky planet or natural satellite, which is chemically distinct from the underlying mantle...
. The mantle part of the lithosphere consists largely of peridotite
Peridotite
A peridotite is a dense, coarse-grained igneous rock, consisting mostly of the minerals olivine and pyroxene. Peridotite is ultramafic, as the rock contains less than 45% silica. It is high in magnesium, reflecting the high proportions of magnesium-rich olivine, with appreciable iron...
. The crust is distinguished from the upper mantle by the change in chemical composition that takes place at the Moho discontinuity.

Oceanic lithosphere consists mainly of mafic
Mafic
Mafic is an adjective describing a silicate mineral or rock that is rich in magnesium and iron; the term is a portmanteau of the words "magnesium" and "ferric". Most mafic minerals are dark in color and the relative density is greater than 3. Common rock-forming mafic minerals include olivine,...
crust and ultramafic mantle (peridotite
Peridotite
A peridotite is a dense, coarse-grained igneous rock, consisting mostly of the minerals olivine and pyroxene. Peridotite is ultramafic, as the rock contains less than 45% silica. It is high in magnesium, reflecting the high proportions of magnesium-rich olivine, with appreciable iron...
) and is denser than continental lithosphere, for which the mantle is associated with crust made of felsic
Felsic
The word "felsic" is a term used in geology to refer to silicate minerals, magma, and rocks which are enriched in the lighter elements such as silicon, oxygen, aluminium, sodium, and potassium....
rocks. Oceanic lithosphere thickens as it ages and moves away from the mid-ocean ridge. This thickening occurs by conductive cooling, which converts hot asthenosphere into lithospheric mantle, and causes the oceanic lithosphere to become increasingly thick and dense with age. The thickness of the mantle part of the oceanic lithosphere can be approximated as a thermal boundary layer that thickens as the square root of time.

is the thickness of the oceanic mantle lithosphere,

is the thermal diffusivity (approximately 10−6 m2/s), and

Geophysical studies in the early 21st Century posit that large pieces of the lithosphere have been subducted into the mantle as deep as 2900 km to near the core-mantle boundary, while others "float" in the upper mantle, while some stick down into the mantle as far as 400 km but remain "attached" to the continental plate above, similar to the extent of the "tectosphere" proposed by Jordan in 1988.

Geoscientists can directly study the nature of the subcontinental mantle by examining mantle xenolith
Xenolith
A xenolith is a rock fragment which becomes enveloped in a larger rock during the latter's development and hardening. In geology, the term xenolith is almost exclusively used to describe inclusions in igneous rock during magma emplacement and eruption...
s brought up in kimberlite
Kimberlite
Kimberlite is a type of potassic volcanic rock best known for sometimes containing diamonds. It is named after the town of Kimberley in South Africa, where the discovery of an diamond in 1871 spawned a diamond rush, eventually creating the Big Hole....
, lamproite
Lamproite
Lamproites are ultrapotassic mantle-derived volcanic and subvolcanic rocks. They have low CaO, Al2O3, Na2O, high K2O/Al2O3, a relatively high MgO content and extreme enrichment in incompatible elements....
, and other volcanic pipes. The histories of these xenoliths have been investigated by many methods, including analyses of abundances of isotopes of osmium
Osmium
Osmium is a chemical element with the symbol Os and atomic number 76. Osmium is a hard, brittle, blue-gray or blue-blacktransition metal in the platinum family, and is the densest natural element. Osmium is twice as dense as lead. The density of osmium is , slightly greater than that of iridium,...
and rhenium
Rhenium
Rhenium is a chemical element with the symbol Re and atomic number 75. It is a silvery-white, heavy, third-row transition metal in group 7 of the periodic table. With an average concentration of 1 part per billion , rhenium is one of the rarest elements in the Earth's crust. The free element has...
. Such studies have confirmed that mantle lithospheres below some craton
Craton
A craton is an old and stable part of the continental lithosphere. Having often survived cycles of merging and rifting of continents, cratons are generally found in the interiors of tectonic plates. They are characteristically composed of ancient crystalline basement rock, which may be covered by...
s have persisted for periods in excess of 3 billion years, despite the mantle flow that accompanies plate tectonics.