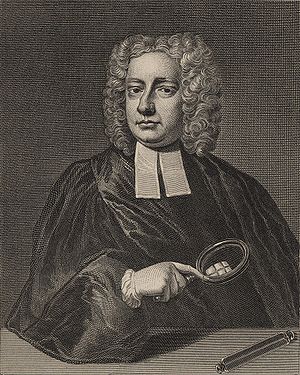 The Copley Medal is an award given by the Royal Society of London for "outstanding achievements in research in any branch of science, and alternates between the physical sciences and the biological sciences". Awarded every year, the medal is the oldest Royal Society medal still being awarded, having first been given in 1731 to Stephen Gray
Stephen Gray (scientist)
Stephen Gray was an English dyer and amateur astronomer, who was the first to systematically experiment with electrical conduction, rather than simple generation of static charges and investigations of the static phenomena....
, who received it for "his new Electrical Experiments: – as an encouragement to him for the readiness he has always shown in obliging the Society with his discoveries and improvements in this part of Natural Knowledge". The medal was created following a donation of £
Pound sterling
The pound sterling , commonly called the pound, is the official currency of the United Kingdom, its Crown Dependencies and the British Overseas Territories of South Georgia and the South Sandwich Islands, British Antarctic Territory and Tristan da Cunha. It is subdivided into 100 pence...
100 to be used for carrying out experiments by Sir Godfrey Copley, for which the interest on the amount was used for several years. The conditions for the medal have been changed several times; in 1736, it was suggested that "a medal or other honorary prize should be bestowed on the person whose experiment should be best approved", and this remained the rule until 1831, when the conditions were changed so that the medal would be awarded to the researcher that the Royal Society Council decided most deserved it. A second donation of £1666 13s. 4d
Penny (British pre-decimal coin)
The penny of the Kingdom of Great Britain and later of the United Kingdom, was in circulation from the early 18th century until February 1971, Decimal Day....
. was made by Sir Joseph William Copley in 1881, and the interest from that amount is used to pay for the medal. The medal in its current format is made of silver gilt and awarded with a £5000 prize.

||"For an experimental enquiry into the Mineral Elastic Spirit, or Air, contained in Spa-Water; as well as into the Mephitic qualities of this Spirit. (Brownrigg)"
"For his Experiments and Observations on the agreement between the specific gravities of the several Metals, and their colours when united to glass, as well as those of their other preparations. (Delaval)"

"For his Paper communicated this present year, containing his Experiments relating to Fixed Air. (Cavendish)"
||
|-
|1767 ||||"For his Papers of the year 1767, On the animal nature of the Genus of Zoophytes called Corallina, and the Actinia Sociata, or Clustered Animal Flower, lately found on the sea coasts of the new-ceded Islands"||
|-
|1768 ||||"For his Experiments on the Distillation of Acids, Volatile Alkalies, and other substances"||
|-
|1769 ||||"For his Two Papers, entitled, An Account of the Lymphatic System in Amphibious Animals, – and An Account of the Lymphatic System in Fish"||—
|-
|1770 ||||"For his Paper, entitled, An Account of a Journey to Mount Etna"||
|-
|1771 ||||"For his paper entitled, An Enquiry into the value of ancient Greek and Roman Money"||—
|-
|1772 ||||"On account of the many curious and useful Experiments contained in his observations"||
|-
|1773 ||||"For his Paper on the Torpedo"||
|-
|1774 ||No Award||—||—
|-
|1775 ||||"In consideration of his curious and laborious Observations on the Attraction of Mountains, made in Scotland, – on Schehallien"||
|-
|1776 ||||"For his Paper, giving an account of the method he had taken to preserve the health of the crew of H.M. Ship the Resolution, during her late voyage round the world. Whose communication to the Society was of such importance to the public"||
|-
|1777 ||||"On account of his valuable Paper containing directions for making the best Composition for the metals of Reflecting Telescopes; together with a description of the process for grinding, polishing, and giving the best speculum the true parabolic form"||—
|-
|1778 ||||"For his paper, entitled, The force of Fired Gunpowder, and the initial velocity of Cannon Balls, determined by Experiments"||
|-
|1779 ||No Award||—||—
|-
|1780 ||||"For his paper, entitled, An investigation of the Principles of Progressive and Rotatory Motion, printed in the Philosophical Transactions"||
|-
|1781 ||||"For the Communication of his Discovery of a new and singular Star; a discovery which does him particular honour, as, in all probability, this start has been for many years, perhaps ages, within the bounds of astronomic vision, and yet till now, eluded the most diligent researches of other observers"||
|-
|1782 ||||"As a reward for the merit of his labours in the science of Chemistry. For his chemical analyses of Salts"||
|-
|1783 || and Thomas Hutchins
Thomas Hutchins (naturalist)
Thomas Hutchins was a British physician and naturalistHutchins was employed as Hudson's Bay Company surgeon at York Factory 1766–73 then chief of Albany fort 1774–82....
||"For his discovery of the Period of the Variation of Light in the Star Algol. (Goodricke)"
"For his Experiments to ascertain the point of Mercurial Congelation. (Hutchins)"
||
|-
|1784 ||||"For his Mathematical Communications to the Society. For his Paper On the Summation of Series, whose general term is a determinate function of z the distance from the first term of the series"||
|-
|1785 ||||"For his Measurement of a Base on Hounslow Heath"||
|-
|1786 ||No Award||—||—
|-
|1787 ||||"For his three Papers, – On the Ovaria, On the identity of the dog, wolf, and jackall species, and On the anatomy of Whales, printed in the Philosophical Transactions for 1787"||
|-
|1788 ||||"For his two Papers on Congelation, printed in the last (78th) volume of the Philosophical transactions"||
|-
|1789 ||||"For his two Papers on the values of Reversions and Survivorships, printed in the two last volumes of the Philosophical Transactions"||
|-
|1790 ||No Award||—||—
|-
|1791 || and
Jean-André De Luc
||"For his Paper on the Rate of Travelling as performed by Camels, printed in the last (81st) volume of the Philosophical Transactions. (Rennell)"
"For his Improvements in Hygrometry. (De Luc)"
||
|-
|1792 ||||"For his various Papers on the Properties and Communication of Heat"||
|-
|1793 ||No Award||—||—
|-
|1794 ||||"For his several Communications explanatory of certain Experiments published by Professor Galvani"||—
|-
|1795 ||||"For his various inventions and improvements in the construction of the Instruments for the Trigonometrical measurements carried on by the late Major General Roy, and by Lieut. Col. Williams and his associates"||
|-
|1796 ||||"For his Paper on the construction and analysis of geometrical propositions determining the positions assumed by homogeneal bodies which float freely, and at rest; and also determining the Stability of Ships and other floating bodies"||
|-
|1797 ||No Award||—||—
|-
|1798 || and
Charles Hatchett
Charles Hatchett
Charles Hatchett FRS was an English chemist who discovered the element niobium.- Biography:Hatchett was born, raised, and lived in London...

||"For his various Communications to the Royal Society relating to his researches made in the late Expedition to the Arctic Regions. (Sabine)"
"For his Papers printed in the Philosophical Transactions. (Herschel)"
||
|-
|1822 ||||"For his Paper on the Fossil Teeth and Bones discovered in a Cave at Kirkdale"||
|-
|1823 ||||"For his various Communications to the Royal Society"||—
|-
|1824 ||||"For his various Communications to the Royal Society"||
|-
|1825 || and Peter Barlow||"For the Discovery of the Magnetic Properties of substances not containing Iron. For the Discovery of the power of various bodies, principally metallic, to receive magnetic impressions, in the same, though in a more evanescent manner than malleable Iron, and in an infinitely less intense degree. (Arago)"
"For his various Communications on the subject of Magnetism. (Barlow)"
||
|-
|1826 ||||"For his observations of Double Stars, and his Paper on the Discordances between the Suns observed and computed Right Ascensions, published in the Transactions of the Society. For his Paper of Observations of the Apparent Distances and Positions of Four Hundred and Fifty-eight Double and Triple Stars, published in the present volume (1826, Part 1.) of the Transactions"||
|-
|1827 || and
Henry Foster
Henry Foster (scientist)
Henry Foster was a British naval officer who took part in expeditions to the Arctic and Antarctic and made various notable scientific observations....

||"For his Paper entitled, On the ultimate Composition of simple alimentary substances, with some preliminary remarks on the analysis of organized bodies in general. (Prout)"
"For his magnetic and other observations made during the Arctic expedition to Port Bowen. (Foster)"
||
|-
|1828 ||No Award||—||—
|-
|1829 ||No Award||—||—
|-
|1830 ||No Award||—||—
|-
|1831 ||||"For his Papers, On the principle of the construction of the Achromatic Eye-pieces of Telescopes, – On the Spherical Aberration of the Eye-pieces of Telescopes, and for other Papers on Optical Subjects in the Transactions of the Cambridge Philosophical Society"||
|-
|1832 || and Simeon Poisson||"For his discovery of Magneto-Electricity as detailed in his Experimental Researches in Electricity, published in the Philosophical Transactions for the present year. (Faraday)"
"For his work entitled, Nouvelle Theorie de lAction Capillaire. (Poisson)"
||
|-
|1833 ||No Award||—||—
|-
|1834 ||||"For his work entitled, Theorie du Mouvement de la Lune"||
|-
|1835 ||||"For his experimental investigations of the force of electricity of high intensity contained in the Philosophical Transactions of 1834"||
|-
|1836 || and Francis Kiernan
Francis Kiernan
Francis Kiernan FRS was an anatomist and physician.He was born in Ireland, the eldest of four children. His father, Francis Kiernan , was also a physician and brought the family to England in the early 19th century...
||"For his systematic application of the doctrine of definite proportions to the analysis of mineral bodies, as contained in his Nouveau Systeme de Mineralogie, and in other of his works. (Berzelius)"
"For his discoveries relating to the structure of the liver, as detailed in his paper communicated to the Royal Society, and published in the Philosophical Transactions for 1833. (Kiernan)"
||—
|-
|1837 || and
John Frederic Daniell
John Frederic Daniell
John Frederic Daniell was an English chemist and physicist.Daniell was born in London, and in 1831 became the first professor of chemistry at the newly founded King's College London. His name is best known for his invention of the Daniell cell , an electric battery much better than voltaic cells...

||"For his various memoirs on the subject of electricity, published in the Memoires deacademie Royale des Sciences de lInstitut de France, and particularly for those on the production of crystals of metallic sulphurets and of sulphur, by the long-continued action of electricity of very low tension, and published in the tenth volume of those Memoires. (Becquerel)"
"For his two papers on voltaic combinations published in the Philosophical Transactions for 1836. (Daniell)"
||
|-
|1838 ||
and Michael Faraday
Michael Faraday
Michael Faraday, FRS was an English chemist and physicist who contributed to the fields of electromagnetism and electrochemistry....