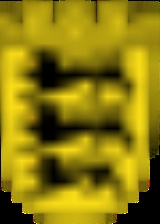 Encyclopedia
Duke of Teck was, in medieval times, a title borne by the head of a principality named Teck in the Holy Roman Empire
Holy Roman Empire
The Holy Roman Empire was a realm that existed from 962 to 1806 in Central Europe.It was ruled by the Holy Roman Emperor. Its character changed during the Middle Ages and the Early Modern period, when the power of the emperor gradually weakened in favour of the princes...
, centered around Teck
Teck
Teck was a ducal castle in the kingdom of Württemberg, immediately to the north of the Swabian Jura and south of the town of Kirchheim unter Teck , taking its name from the ridge, 2544 feet high, which it crowned. It was destroyed in the German Peasants' War...
castle in Germany
Germany
Germany , officially the Federal Republic of Germany , is a federal parliamentary republic in Europe. The country consists of 16 states while the capital and largest city is Berlin. Germany covers an area of 357,021 km2 and has a largely temperate seasonal climate...
. That territory was held by a branch line of the Zähringen
Zähringen
Zähringen is the name of an old German family that founded a large number of cities in what are today Switzerland and Baden-Württemberg. While the junior line that first assumed the title Duke of Zähringen, a cadet branch of the House of Baden, became extinct in 1218, the senior line persists and...
dynasty from 1187 to 1439, known historically as the first House of Teck. The title was recreated in 1871 in the Kingdom of Württemberg
Kingdom of Württemberg
The Kingdom of Württemberg was a state that existed from 1806 to 1918, located in present-day Baden-Württemberg, Germany. It was a continuation of the Duchy of Württemberg, which came into existence in 1495...
for a cousin of its king, Charles
Charles I of Württemberg
Charles was the third King of Württemberg, from 25 June 1864 until his death in 1891.-Early life:He was born 6 March 1823 at Stuttgart, as HRH Charles Frederick Alexander, Crown Prince of Württemberg the son of William I, King of Württemberg and his third wife Pauline Therese of Württemberg .He...
.

Adalbert, son of Conrad of Zähringen, inherited his father's possessions around the castle Teck between Kirchheim and Owen. After the death of his brother Berthold IV, Duke of Zähringen in 1186, Adalbert adopted the title of "Duke of Teck".

In the 13th century, the family divided into the lines of Teck-Oberndorf and Teck-Owen. The Dukes of Teck-Oberndorf died out in 1363 and Frederick of Teck-Owen sold their possessions to the Count of Hohenberg. In 1365, the Dukes of Teck-Owen came into the possession of Mindelheim
Mindelheim
Mindelheim is a town in the German Bundesland of Bavaria. The town is the capital of the Unterallgäu district. At various points in history it was the chief settlement of an eponymous state.- Geography :...
but had to sell their lands around the castle Teck to the Counts of Württemberg
Württemberg
Württemberg , formerly known as Wirtemberg or Wurtemberg, is an area and a former state in southwestern Germany, including parts of the regions Swabia and Franconia....
in 1381 (see Kirchheim unter Teck
Kirchheim unter Teck
Kirchheim unter Teck is a town in Baden-Württemberg, Germany, in the district of Esslingen. It is located on the small river Lauter, a tributary of the Neckar. It is situated near the Teck castle, approximatively 25 km southeast of Stuttgart...
). The last member of that line, Louis of Teck
Louis of Teck
Louis of Teck was a German prelate, who was Patriarch of Aquileia from 1412 until his death.-Biography:He was elected as patriarch with the help of emperor Sigismund of Hungary...
, Patriarch of Aquileia from 1412, died in 1439. 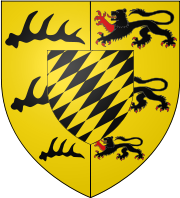 In 1871, the now kings of Württemberg created the title for Prince Francis of Teck
Francis, Duke of Teck
Francis, Duke of Teck , was a member of the German nobility, and later of the British Royal Family. He was the father of Queen Mary, the wife of King George V...
, the son of Duke Alexander of Württemberg
Duke Alexander of Württemberg
Duke Alexander of Württemberg was the father of Prince Francis of Teck and the grandfather of Adolphus Cambridge, 1st Marquess of Cambridge and Queen Mary of Great Britain, wife of King George V....
who had married into the British Royal Family. The title existed until 1917, when the British monarch, George V
George V of the United Kingdom
George V was King of the United Kingdom and the British Dominions, and Emperor of India, from 6 May 1910 through the First World War until his death in 1936....
relinquished all Germanic titles on behalf of himself and his family members living in the British Empire
British Empire
The British Empire comprised the dominions, colonies, protectorates, mandates and other territories ruled or administered by the United Kingdom. It originated with the overseas colonies and trading posts established by England in the late 16th and early 17th centuries. At its height, it was the...
. When the Kingdom of Württemberg collapsed in 1918, the title became extinct.

Prince Francis, 1st Duke of Teck married Princess Mary Adelaide of Cambridge
Princess Mary Adelaide of Cambridge
Princess Mary Adelaide Wilhelmina Elizabeth of Cambridge was a member of the British Royal Family, a granddaughter of George III, and great-grandmother of Elizabeth II. She held the title of Duchess of Teck through marriage.Mary Adelaide is remembered as the mother of Queen Mary, the consort of...
, a granddaughter of King George III
George III of the United Kingdom
George III was King of Great Britain and King of Ireland from 25 October 1760 until the union of these two countries on 1 January 1801, after which he was King of the United Kingdom of Great Britain and Ireland until his death...
in 1866. As the couple had to live off Mary Adelaide's Parliamentary annuity
Life annuity
A life annuity is a financial contract in the form of an insurance product according to which a seller — typically a financial institution such as a life insurance company — makes a series of future payments to a buyer in exchange for the immediate payment of a lump sum or a series...
, since the Duke of Teck had little income, the Duke and Duchess of Teck lived in London
London
London is the capital city of :England and the :United Kingdom, the largest metropolitan area in the United Kingdom, and the largest urban zone in the European Union by most measures. Located on the River Thames, London has been a major settlement for two millennia, its history going back to its...
. In 1887, Queen Victoria
Victoria of the United Kingdom
Victoria was the monarch of the United Kingdom of Great Britain and Ireland from 20 June 1837 until her death. From 1 May 1876, she used the additional title of Empress of India....
, the Duchess of Teck's cousin, granted the Duke of Teck the style His Highness.

When the 1st Duke of Teck died in 1900, the dukedom passed to his eldest son, HSH Prince Adolphus of Teck. King George V
George V of the United Kingdom
George V was King of the United Kingdom and the British Dominions, and Emperor of India, from 6 May 1910 through the First World War until his death in 1936....
granted the 2nd Duke of Teck the style His Highness in 1911.

During World War I
World War I
World War I , which was predominantly called the World War or the Great War from its occurrence until 1939, and the First World War or World War I thereafter, was a major war centred in Europe that began on 28 July 1914 and lasted until 11 November 1918...
, anti-German sentiment in the United Kingdom
United Kingdom
The United Kingdom of Great Britain and Northern IrelandIn the United Kingdom and Dependencies, other languages have been officially recognised as legitimate autochthonous languages under the European Charter for Regional or Minority Languages...
led King George V to change the name of the royal house from the Germanic House of Saxe-Coburg-Gotha to the more English sounding House of Windsor
House of Windsor
The House of Windsor is the royal house of the Commonwealth realms. It was founded by King George V by royal proclamation on the 17 July 1917, when he changed the name of his family from the German Saxe-Coburg and Gotha to the English Windsor, due to the anti-German sentiment in the United Kingdom...
. The King renounced the use of all Germanic titles for himself and for all members of the British Royal Family who were domicile
Domicile
*In architecture, a general term for a place of residence or "permanent residence" in legal terms*Domicile , the zodiac sign over which a planet has rulership...
d in his realms.

In response to this, the Duke of Teck renounced his title of a Prince of Teck and Duke of Teck in the Kingdom of Württemberg and the style His Highness. Adolphus, along with his other Teck relation, Prince Alexander of Teck, adopted the name Cambridge, after their grandfather, Prince Adolphus, Duke of Cambridge.

Adolphus was subsequently created Marquess of Cambridge, Earl of Eltham, and Viscount Northallerton in the peerage of the United Kingdom. His elder son took the title Earl of Eltham as a courtesy title
Courtesy title
A courtesy title is a form of address in systems of nobility used for children, former wives and other close relatives of a peer. These styles are used 'by courtesy' in the sense that the relatives do not themselves hold substantive titles...
. His younger children became Lord/Lady (Christian Name) Cambridge. Alexander was created Earl of Athlone
Earl of Athlone
The title of Earl of Athlone has been created three times. It was created first in the Peerage of Ireland in 1692 by King William III for the Dutch General Baron Godard van Reede, Lord of Ginkel, to honour him for his successful battles in Ireland. The title also had the subsidiary title of Baron...
. His children became the Hon./Lady (Christian Name) Cambridge.